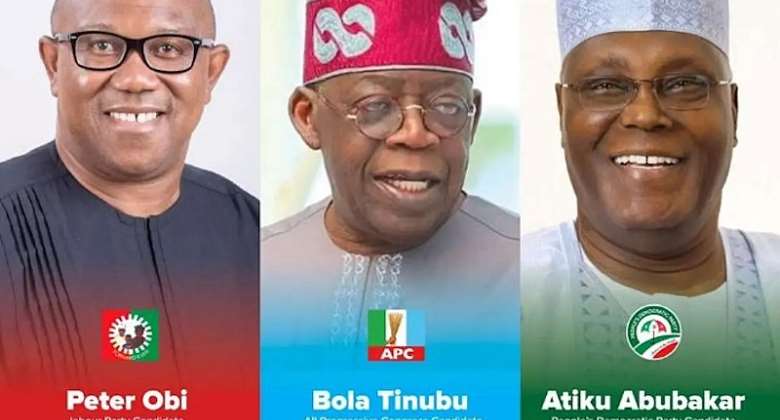 Anyone that thinks a country that was flowing with milk and honey is going to get out of abject poverty soon, with the parade of these Presidential candidates, is a joker. Atiku, Tinubu and Obi have already told you what they are going to do. More of the same by selling off state asserts, becoming the only free open market in the world and turning the whole country into personal or family property.

Let us face it, Activists will not be elected President because they lack experience in looting, terrorism, drug peddling and ritual sacrifice. General Buhari, regardless of party affiliation or loyalty, will vote for Atiku. He will also do everything possible to make sure the Fulani reign continues. Most Yoruba know that and will not play dead before or after the Election. The next Election is becoming irrelevant to the aspiration of southern and Middle Belt voters. The North has decided to continue their reign by tulasi.

Who runs the government but the same people that paralyzed the same government. They all claim Government Business Is Nobody's Business. If Nigeria is run by ants big enough to throw darts on the board, we would have had a better country. After all, ants have an efficient system of division of labor by workers, soldiers and food providers while the queen becomes fat. Nigeria fell from grace to grass in one generation right in our lifetime.

Though poverty increases crimes, a place without law and order breeds even more crimes. Criminals cannot be eliminated, this is why every society supports good moral behavior and law enforcement. Locally and worldwide we hear those that hardly accomplish any tangible tasks for their society, brag about how they made reputable men and women. We must thank them for the Sun that shines, otherwise Nigeria could have sunk below Nigeria!

Presidential ambition of a few Southern candidates cannot override the aspiration of most people in the South. Most Nigerians are sick and tired of the same politicians that have converted the political system into a cash cow for their selfish interests. It is no longer a matter of who becomes the President. The most lucrative business in the country is the politics of do or die where terrorists are ruling. We must thank them for sinking a country into abject poverty.

There is no doubt that the North Central region have woken up from their slumber after Danjuma gave up and implore them to defend themselves. The Governors from the area especially Plateau knew that a long time ago because they were ignored by Fulani military officers that were their subordinates when some were in the Army, as they had called for help. They became helpless watching the massacre of their people in the hands of armed Fulani.

It is not surprising that the Buhari Government has already approved the AK-47 for Katsina Security men, his home state. Anyone that thinks otherwise is a fool playing to the gallery or part of the gangs that are going to use every military means to suppress the rest of Nigeria. Oh, that Katsina Security Forces were only invited for training. Just as those Boko Haram that were captured and released got reabsorbed into the Army for training on AK-47 l, abi.

Yoruba across class and political spectrum believe that they must defend themselves against marauders prowling all over their land. Terrorists have gone out of their land to lay claim on other people's territory or home, while Yoruba seek no territorial amalgamation. Since Yoruba land is the only place where tolerance and accommodation flourish, it has been abused by their hosts with impunity.

Governor Akeredolu must be commended for seeing the charade and chicanery of the Fulani plan after RUGA ranching in Southern land was rejected. He has raised the alarm for those that can perceive. If State Police is not created, there is an obvious vacuum for Amutekun and other law enforcement in each State to be easily overpowered by Fulani bandits. This charade is well beyond AK-47, Fulani herdsmen have no better weapons to control cows. It takes AK-47, no be so?

When it comes to Yoruba Nation, the West has never been this unified. Yoruba hardly deliver block votes to any party. The closest to solid votes was for Awolowo. Even then, Yoruba in NCNC made it difficult before Akintola NNDP split Yoruba politicians. While Awolowo insisted on forming an Alliance with the Eastern Region, Akintola saw a better prospect with the North. Both sides failed, Yoruba must stand on its progressive culture. Others will join on our terms.

Yoruba Nation is already going through the diplomatic process of getting out of Nigeria. The clock is moving faster to that goal than remaining in Nigeria. Yoruba land is the only place most Nigerians aspire to, feel safe and comfortable in. Even when Nigeria eventually split, more Nigerians will relocate to the West than other parts of the country. The irony is that Yoruba talents that should be utilized to make what used to be the most progressive enclave in Africa richer, are being sold into modern form of slavery abroad in the name of salvation.

Those raising the aspiration of Igbo for President are right. Unfortunately, the Nigeria the Southern candidates would like to rule no longer exist. Unless they want to wait for another hundred years. Power has to go to those who have future stake in the country, not spent career politicians jumping from one house to another as representatives,governors, senators to President. As long as you they remain on government doles getting the highest remuneration in the world.

Tinubu, a man who should be celebrating his obscure humble beginning to encourage the downtrodden, he cannot, because he graduated into a voracious caterpillar. He would rather ridicule the dignity of labor to hide his Insecurity complex. But then, it is not his fault since he gets enough Youths support, paying homage to his tainted legacy of avarice.

Indeed, the reason Nigeria dropped to the lowest poverty level is the consequence of the choice we made of politicians leading the country. A country put on automatic cruise would have done a better job because these leaders intentionally sold our interest out to any willing bidders, in most cases for less than they are willing to pay.