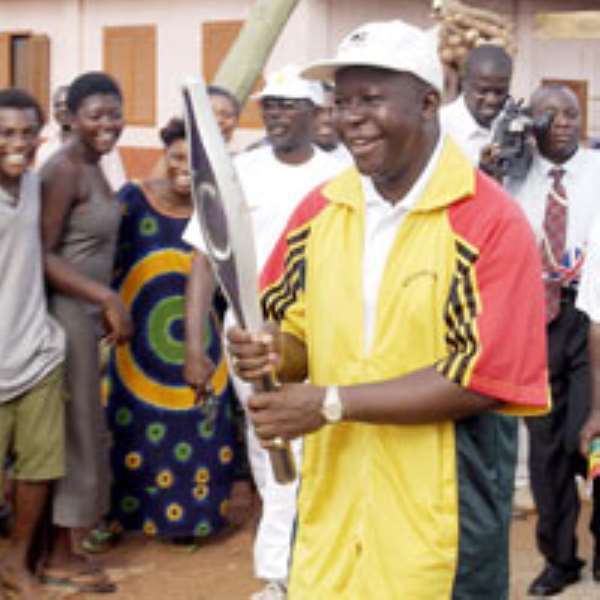 I believe that the Otumfuo's call in his address to members of the Ashanti regional house of chiefs was made in good faith, however, considering the nature of the very institution which the Otumfuo represents, its undemocratic, corrupt, and abusive nature, we need less of the institution and not more of it on the national political scene. In fact, the present state of our nation's underdevelopment is partly due to the presence of the chieftaincy institution on our soil if we are honest about ourselves. It is no surprise that America did away with all forms of chieftaincy after their independence. That was a wise decision which paved the way for the establishment and entrenchment of democratic institutions surpassing that of their former colonial master-Britain. Ghana should have shaken herself off, of all forms of chieftaincy after independence, but instead, she chose to embrace it and lived with it to her doom. The very institution that colluded with the colonial master in the brutal oppression of the Ghanaian under indirect rule, the institution that sold large numbers of its people into slavery sometimes for salt, and continue to hold the large number of Ghanaians it calls “subjects” in servitude, wants more recognition and active involvement in our national politics. The Question is, more of that for what? This call by the Otumfuo is a little too late for the Ghanaian populace. We need less of chieftaincy and not more if we want to advance in democracy.

I do not think that chieftaincy institution has anything good for our future development, that warrant the establishment of a whole ministry for it, because it is by design undemocratic, antidevelopment, and repressive putting it at odd with the development of democracy in Ghana. Britain, Morocco, Jordan, Saudi Arabia and many countries with chieftaincy entrenched in national politics are either static or slow in growth as compared to the U.S., Germany, France, China, South Korea, and etc. which are more democratic and provide for nearly, equal opportunity for all citizens.

If anybody from Ghana who meets the age requirement, and of sound mind, and meet other stipulated qualities, has equal chance of becoming the president of Ghana, irrespective of the region or locality where the person hails from, why can't all people who come from a town or a village, have equal chance of becoming the chief of the town? Why should some few elements in society select someone as chief for a town to lord over all people of the town? Why can't everybody of voting age, vote to elect the chief who will make laws for all of them to follow? The very nature of chieftaincy institution puts it at odd with true democratic dispensation we seek to build in Ghana unless certain aspect of democracy is subjugated under chieftaincy to enable the later institution find an unfitting place in democracy. The core of democracy is the government of the people and by the people, which translates as, the people themselves electing the government to represent them. For chieftaincy to have any meaningful role in the development of Ghana in this century and the next, it must be fashioned along the model of the Asantefuohene of New York, making it an electable office that is accountable to the people who elect the chiefs, thereby, reducing it to something similar to the mayoral system of the US. This way, any progressive person from the locality could stand and win to become the local chief for a specific term in office.

In its present state, the institution is corrupt, because it is inherently so. Lots of money in royalties is paid to chiefs who use such monies as their private income instead of using it for projects that benefit the ordinary man. Chiefs do not account for whatever monies they receive and hold in trust of the people, and nobody dares question them about such transfers, why should anyone advocate for more of this if the advocator is not a direct beneficiary of this inept and corrupt institution. To give an example of what I mean here, royalties from mining and timber concessions, and etc have been paid by government and foreign firms to chiefs who have failed to use such monies for the common good of the town folks with impunity, yet no one has the capacity to challenge them or call them to account for such monies to the people they call their subjects.

Ghanaians everywhere know that protracted disputes in all communities are primarily due to chieftaincy struggles. Whiles two families may be struggling to occupy the stool or skin whichever it may be, the rest of the community stands by and watch helplessly, whilst development of the area becomes another casualty. From “Bawku” in the north down to Accra, the country is full of chieftaincy disputes of various proportions. To avoid this, the people need to elect their own chief, a person they can all rally behind for progress, and if it comes a time they are fed up with him, vote him out of office. Consider the Ya Na's case, look at Accra; where the chiefs have sold all the Ga lands for huge sums of money, and yet, they have not used any of those monies for projects that will benefit the youth, instead, they call upon government to provide jobs for the youth. Why should such chiefs call for government to give them more money as development partners? They should rather be seen as anti-development partners and not development.

Consider this case, a chief (name withheld) who has woefully failed to bring development to his town of over 20,000 people despite the huge sums received on behalf of the town, also embezzled $10,000 being the first installment of $150,000 donated by an influential African-American group in the US to build a library complex in the town(which is also in the Ashanti Region), thereby, depriving not only his so-called subjects the opportunity of getting this huge ultra modern project, but also Ghana as a whole because any Ghanaian from whichever remote part of the country could one day have found himself/herself traveling to that town and use the library facility if in fact this chief had not embezzled the initial $10.000, which led to the cancellation of the project by the donors. That notwithstanding, the people of that town had attempted to seek redress at the Otumfuo's palace to no avail, implying that the Otumfuo himself is condoning corruption. Needless to mention that, the project's twin sister which went to Senegal had since been completed and being used by Senegalese, whilst that meant for Ghana could not take off due to the chiefs' embezzlement. Do we want more of this?

My humble appeal to the president is that, if he can not do anything to eliminate this backward institution from our daily lives, he must not do anything to encourage and expand its influence, because the more of it we get, the worst we become as a people seeking to advance in development. To Otumfuo, we appreciate your noble objective and your developmental spirit, but as mentioned before, it is a little too late, across the length and breadth of Ghana, people no longer have faith in their chiefs, yet, they are accommodating them because they are handcuffed and can not do anything to do away with them. Views expressed by the author(s) do not necessarily reflect those of GhanaHomePage.