Russia trapped in a catastrophe of their own making 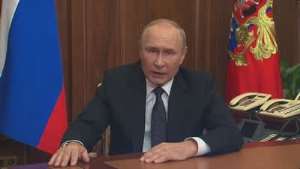 A cursory observation of the Crimean invasion and the strategy used by Moscow seems not to have changed as that of the February 2022 invasion of Ukraine. Putin hoped that the expansion of the strategy similar to that of Crimea in February 2014 will yield faster results over the whole Ukraine peninsula. However, that strategy seems not to be a good move, if not changed.

Moscow was very hopeful that a military blitzkrieg to take control of Ukraine in a month at most will restamp the superpower status of the one-time leader of the USSR. The motive of this trajectory was to take over and swiftly install in Kyiv a puppet and weak leader like Lukashenko in Belarus. This is a clear geopolitical blunder of a lifetime.

A superpower status of that of Russia with Putin leading the charge against sovereign Ukrainian citizens, was obvious of decisive victory in the very shortest possible time. Putin calculated victory in less than a month and at most a month. He was convinced that the strength of the Russian army would allow him a quick takeover of the country. Those calculations have gone down the spiral.

When Russia tried to decapitate the Kyiv government with a daring airborne assault at the Hostomel Airport, it failed. The defeat at Hostomel didn't go down well with Putin as they needed it badly to ignite the process of encirclement and a morale booster for Russian forces and for air supplies into Ukraine.

A clear observation is deduced from how the offenses and defenses are done. Ukrainian troops are clearly attacking areas where they seem relaxed thereby breaking the Russian line and forcing nearby defenders to flee to avoid encirclement.

They have achieved this brilliantly in the Kharkiv Oblast, followed up with the attack on Lyman, and seem to be repeating the feat on the Kherson front.

President Putin might have thought of Ukraine as a prototype of Budapest or Prague. He has to come to terms with the reality that Ukraine is neither Budapest in 1956 or Prague in 1968. It's Ukraine with patriotic citizens of good standing who are ready to sacrifice their lives to give life to the freedom and rights of the next generation. This is what drives Ukraine not to give up.

Since the war began, Ukraine has made a quantum leap in their fighting abilities. Why? Many reasons. Most from their association with the West. This has given a morale boost to Ukrainian Forces to launch counter-offensives. The latest one is the offensive in the Kherson region, and also in the area of the Oskol River. This shows the improvement of Ukraine in this war. One thing is clear to point out that Kherson would represent one more obstacle to Putin taking Odessa.

Anyone who thinks you can trade “land for peace” with Putin doesn’t know Putin. Putin is at a stage where he listens to no one. He's going crazy over taking down Ukraine since February of this year and yet has been unsuccessful. As to whether he has an updated calendar with him to draw his attention, nobody knows.

The reason why Russia wouldn't want to lose Crimea is because Russia used the Crimea to attack Ukraine from the south, using the Kerch Straits bridges for resupply. Russia is using the Sevastopol naval base to blockade all of Ukraine’s ports.