Presidential Palace: The Saga Of White Elephants And Ivory Towers 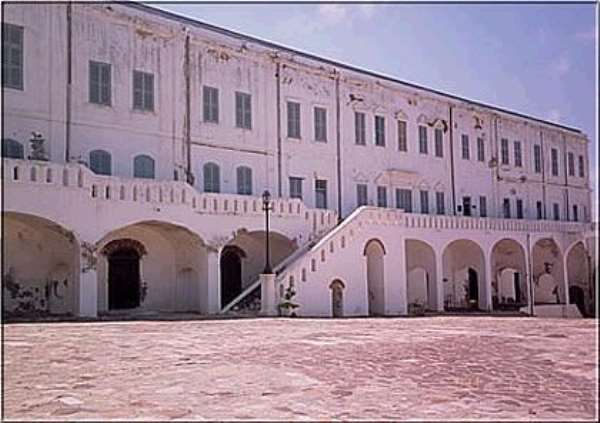 Family, there is trouble in the land. The latest storm has been lit by the Kufour Administration to source out funds ($30 million dollars) from India to build a Presidential Palace, to house the presidency and support staff, at a place other than the Osu Castle, which has been our seat of government prior to and from the time of independence.

Listen to some of the arguments for and against the Palace to understand the plot of this article:

Stephen Asamoah-Boateng: “Osu Castle should be kept as historical monument, as it is not suitable for government. All the presidential staffers do not fit into the castle... and I for one don't agree with using a slave castle as a seat of government.” Asamoah-Boateng is the Deputy Minister of Tourism Mr. Osei Prempeh, Chairman for the Committee on Constitutional and Parliamentary Affairs: “After 50 years of nationhood, Ghana was still using the colonial edifice called the Castle as the seat of government. It is noteworthy that all countries in the sub-region have magnificent edifices for their presidency. “ Mr. Alban Bagbin, The Minority Leader: "We sincerely believe it is a classic case of misplaced priorities to spend over 270 billion Cedis on presidential offices and residence complex at this time. While this is a sole sourcing project and, therefore, not usually subject to the usual rigors of tender and other procurement procedures, the usual value for money evaluation that guarantees that the public purse is not short changed has not been carried out." It has to be pointed out that the $30 million loan is one-half of a $60 million dollars loan from the Indian Exim facility with the other half going for rural electrification. It has to be argued that there is nothing in the loan or grant to dictate how we utilize the money. It is not a tied loan, and Ghana has a free hand to use the money any how she sees fit. This is where we come in. Given the myriad of problems facing Ghana at this particular time, not later, does presidential palace rise to the level of pressing national need that has to be addressed now, ahead of eradicating guinea worms, fighting against malaria, revamping or buttressing up the University of Development Studies, providing school textbooks, providing prenatal and postnatal services for our women, HIV AIDS prevention and education etc.? Every Ghanaian knows the adage; cut your coat according to your size, we are sorry to say the government's argument has nothing in it except a desire to keep up with the Joneses. We have heard strange things but the argument by Mr. Asamoah-Boateng is the strangest and weakest of all. That the presidency cannot be housed in a Castle where slaves used to be kept. If that is the case a lot of the palaces strewn across the country should be burned down or vacated. We posit that not only the Castle, but the kingly palaces where slaves were once held and human sacrifices had taken place should be vacated, unfit for human habitation. If you are faced with a choice of attending to two people in an accident, one severely wounded and the other lightly wounded, do you attend to the one bleeding to death or attend to the one mildly wounded first? We had just crawled out of the humbling HIPC label, attendant with debt forgiveness, and the next thing we know is we are contracting loans to build palatial edifices. Has the ethos of the NPP elephant taken over our leaders to the extent that we are now embarking on white elephant projects? Are our leaders so high up on ivory towers they have forgotten their humble beginnings. Are we about to vacate a Dutch castle, built with the sweat and blood of our hallowed ancestors, into an Indian Palace? Those are not what I am saying those are what the people are saying and the country's leadership better wake up and listen. The British Prime Minister lives at a humble street address, the Number 10 Downing street not the Buckingham Palace as some NPP MPs would want us to believe.

If we are going to make it to the middle income country we so desire, we need stringent adherence to fiscal and financial discipline, follow through on a well thought out development plan that outlasts one particular administration, not the borrowing of money to indulge in self aggrandizement. The current government is over bloated with deputy ministers to deputy ministers, which are one area to cut the fat so that they can fit into the castle or wherever they may be. We have a country with open ended parliamentary seats, when common sense should dictate we keep a fixed number of seats and allocate each region a number of seats on the basis of its percentage in the general population. We have an open ended number of judges to our Supreme Court when even the USA has nine Supreme Court judges for a 320 million population. The way things are, we shall keep on adding to the number of MPs as the population grows and then we shall find ourselves in a situation where we would need a bigger and larger parliament house, when the truth of the matter is those who are already there are not even adequately resourced with staff, library, cars and computers to do quality job. Is it any wonder some are resorting to wrist watch trading? They have nothing to do or are low balled already to a situation whereby they have to find something else to do to occupy themselves.

There is something dignifying and edifying by being self reliant. It means self determination. It means self esteem. It means the rise of the African personality, championed by our first president, Dr. Kwame Nkrumah. To take a loan from India, and then leave it the hands of the Indians to design and build the Palace to house our own president, rises to moral and criminal offense of epic proportion. Kufour is subjecting us to monumental ridicule and humiliation, the like of which we have not seen before. The Castle at least is washed and sanctified, not cursed, by the blood of our ancestors. It is on our coat of arms. It is Ghana, and its magnificence has grown with the passing of time. We do not need an Indian Castle or Palace. Will the Indians allow Ghana to give them a loan for their Prime Minister House, and not only a loan, but also design the building to house the prime minister? Hell no. Yet we are behaving like a crack cocaine addict confronted by a piece of white rock. Those Indians are going to put that building on a catalogue to show the whole world as a means to get other businesses, especially in West Africa. That is what is in for them; propaganda and bragging rights. Please President Kufour, review this loan. If we have to build the Presidential Palace at all cost, it should be sourced 100 percent from Ghana, designed and built by Ghanaians, not Indians. Do we have any sense of shame left in us, I demand? Left to me this palace business does not rise to the priority list of this country at this time. It rather pours badly needed funds on the presidency alone rather than the country. You see Kwame Nkrumah took loans to build the Akosombo Dam, the Tema Harbor and community townships, the Kwame Nkrumah University of Science and Technology, the Tema Motorway etc. The guy hardly had his own house. He had none at Nkroful except perhaps his ancestral family homes. He channeled the overseas loan to lift the whole of Ghana not for himself. To renovate and refurbish the Castle, plus your own private residence, only to say your own BLOATED government can no more fit into the Castle, is disingenuous and insensitive to the little guy, the mamma and papa Ghana, on whose back and sweat these loans are being contracted but who would never get invited in a life time to see the inside of the present Osu Castle nor the yet to come Indian Palace. Don't we have any compassion left in us, to guide us and to keep the interest of the little man and woman, the bare footed school kid, before we begin to indulge in extravagance? Have we lost our bearing, is that what this is about? Please think Ghana first.

Every day and night those of us in the Diaspora are inundated by requests for money to help out medical bills, midwifery bills, school fees, and even chop money to keep body and soul together. We get and feel the heat in our pockets, and these are coming from all manner of people, old and young. It is not a matter of them being lazy. The jobs are not there, hence the upswing in banditry and armed robbery and prostitution, even against the background of HIV AIDS. The jobless have hard time staying alive let alone marry and raise family. The system is not working, notwithstanding the statistics the government is giving us. Serious work needs to be done. Given the loans and grants that we are taking from left and right to finance every conceivable project, one is left to wonder whether we are able to marshal our own internal resources to do anything at all. Please president Kufour, cut the fat, a lean and mean cabinet is what we need not a minister for every aspect of life. And the Castle, I think it should be adequate for a country of 20 million, given what other countries like Nigeria, USA etc with bigger populations have to work with. The Indian loan is available, channel it to something else, and lets use internal architects and funds to build an office complex and residency for the presidency, at a future time, if we have to do it at all cost. From a Dutch Castle to Indian Palace, I am afraid we reject it. It is not foolish pride; it has all got to do with sovereignty and our dignity among the comity of nations. Eric Kwasi Bottah, alias Oyokoba Philadelphia, PA USA Views expressed by the author(s) do not necessarily reflect those of GhanaHomePage.