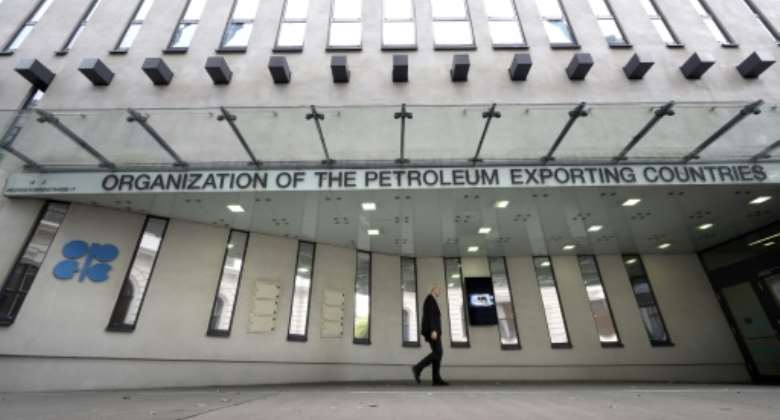 OPEC+ is holding its first in-person meeting since March 2020. By JOE KLAMAR (AFP)

Ministers from oil exporting countries were expected Wednesday to agree on major production cuts to prop up prices, a move that could irk the United States as economies struggle with energy-fuelled inflation.

The 13-nation OPEC cartel and its 10 Russian-led allies are reportedly considering a reduction of up to two million barrels per day at a meeting in Vienna -- the biggest cut since the height of the Covid pandemic in 2020.

Such a move could turbocharge crude prices, further aggravating inflation which has reached decades-high levels in many countries and is contributing to a global economic slowdown.

It could also give Russia a boost ahead of a European Union ban on most of its crude exports later this year and a bid by the Group of Seven wealthy democracies to cap the country's oil prices.

US President Joe Biden personally appealed to Saudi leaders in July to boost production in order to tame prices which soared following Russia's invasion of Ukraine earlier this year.

But crude price have fallen in recent months on concerns over dwindling demand and fears over a possible global recession.

"With consumers only just breathing a sigh of relief after being forced to pay record prices at the pump, today's cut is not going to go down well," said Craig Erlam, an analyst at trading platform OANDA.

Ministers from the Saudi-led Organization of the Petroleum Exporting Countries and its partners were tight lipped as they arrived for their first gathering at OPEC headquarters in Vienna since March 2020.

When asked how the United States would react to a cut, the energy minister of the United Arab Emirates, Suhail al-Mazrouei, insisted that OPEC was merely a "technical organisation".

Saudi Arabia's energy minister, Prince Abdulaziz bin Salman, only commented on the weather -- a "sunny day" -- as he entered the OPEC headquarters for the meeting.

Alexander Novak, the Russian deputy prime minister in charge of energy who is under US sanctions, remained mum as he arrived.

Collectively known as OPEC+, the alliance drastically slashed output by almost 10 million barrels per day (bpd) in April 2020 to reverse a massive drop in crude prices caused by Covid lockdowns.

OPEC+ began to raise production last year after the market improved. Output returned to pre-pandemic levels this year, but only on paper as some members have struggled to meet their quotas.

The group agreed last month on a small, symbolic cut of 100,000 bpd from October, the first in more than a year.

Observers expect OPEC+ officials to discuss the removal of up to two million bpd out of the market from November.

Consumer countries have pushed for months for OPEC+ to open taps more widely to bring down prices -- calls that the group has largely ignored.

"Knowing that Russia is willing to cut output, the move could also be perceived as another escalation of the geopolitical tensions" between Moscow and the West, said Ipek Ozkardeskaya, a Swissquote bank analyst.

Biden made a controversial trip to Saudi Arabia in July in part to convince the kingdom to loosen the production taps. The trip saw Biden meet Crown Prince Mohammed bin Salman despite his promise to make Riyadh a "pariah" following the 2018 killing of journalist Jamal Khashoggi.

A major cut now would be "something that will not be well received by the White House ahead of next month's midterm elections," said Tama Varga, analyst at PV Energy, referring to congressional elections.

White House press secretary Karine Jean-Pierre said on Tuesday that "we will continue to take steps to protect American consumers", declining to comment on the OPEC discussions directly.

While such a cut could anger Washington, several OPEC+ nations have struggled to meet their quotas in the first place.

Prices soared close to $140 per barrel in the aftermath of Russia's invasion of Ukraine in late February but fell as low as below $90 more recently.

After rallying earlier this week on speculation over the OPEC+ cut, the international benchmark, Brent North Sea crude, hovered around $92 on Wednesday.

Your plan to buy oil with gold instead of USD bogus; you're ...
19 minutes ago