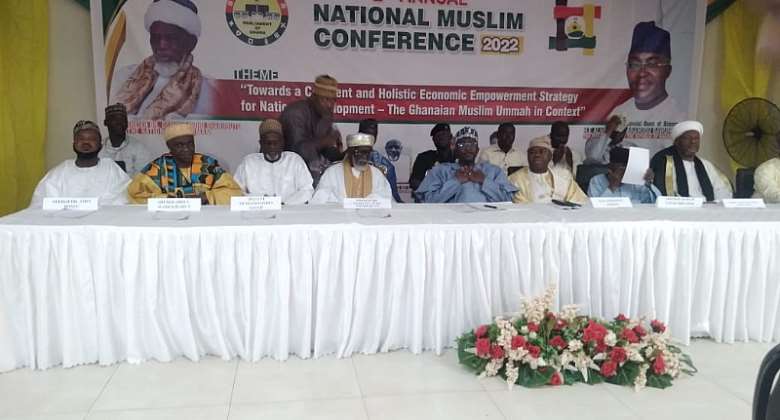 Sheikh Dr Amin Bonsu, National Chairman, Ghana Muslim Mission said Muslims need to eschew bickering and triviality and instead work together to build the capacity of the Muslim community to better serve the nation.

He said the unity of a relatively large population of Muslims despite being a minority presented an opportunity to raise the needed financial capital to embark on human development projects.

“We are about six million of the population. Give four million to the youth and the aged. If the 2 million of us can raise GH1 cedis each Friday in a week we can raise GH₵2 million,” he said.

He gave the advice at the recent second edition of the National Muslim Conference (NMC) on the theme: “Towards a Coherent and Holistic Economic Empowerment Strategy for National Development-The Ghanaian Muslim Ummah in Context”.

The conference was to create a Forum for Ghanaian Muslims to deliberate on how to make communities economically prosperous and eliminate extreme poverty and deprivation.

Sheikh Umar Ibrahim, the Imam of Ahlusunna Wal Jamma, noted that a lack of trust over the years had bedevilled the developmental agenda of Muslims in the country due to a lack of transparency and accountability.

He said it was better late than never for Muslims to come together for a collective goal.

“If we had conceived this thought since the time of Dr Kwame Nkrumah, we would have progressed better. However, Allah knows the best time for doing things,” he said.

The Imam of the Shia sect in Ghana, Sheikh Abubakar Kamaludeen, said the Muslim populace must learn to trust politicians who suffered from scepticism even if they meant well for the people.

“Any initiative coming from a politician is always welcomed by suspicion,” he said.

He further called for the development of a well-structured dialogue process to ensure stakeholders have ample opportunity to make input into the formulation of documents that would be binding on all stakeholders.

Maulvi Muhammad Noor Bin Salih, Ameer and Missionary of the Ahmadiyya Muslim Mission in Ghana, commended the Muslim leadership for setting aside their differences and working together.

The NMC is expected to serve as the mouthpiece of all Muslims on matters of mutual concern and also to serve as a forum for Ghanaian Muslims to deliberate on national policies and programmes.

It would also offer opportunities for Muslims to participate in the legislative process through the submission of memoranda to committees of parliament when bills are been considered as well as represents Muslims to seek redress in the courts of the land on matters affecting the legal and fundamental rights of Muslims in Ghana.

The Conference is established under a deed signed by the National Leaders of all the Muslim groups in Ghana, namely, Ahmadiyya, Tijania, Ahlu Sunnah and Shia as well as the Ghana Muslim Mission and the Muslim Caucus of Parliament.

Your plan to buy oil with gold instead of USD bogus; you're ...
41 minutes ago