The Per Diem Controversy And Me 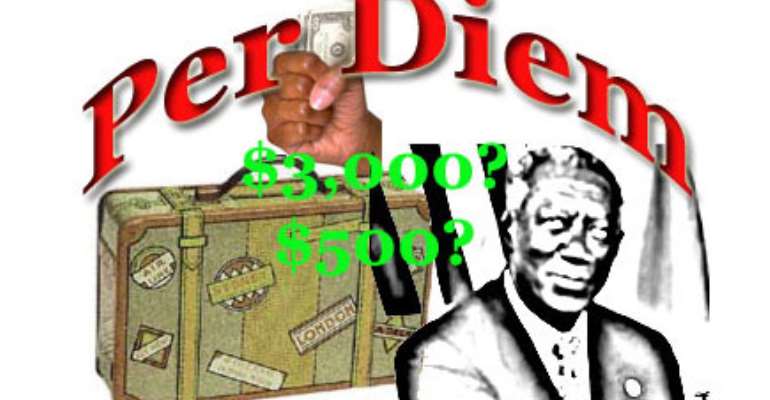 In the wake of the brouhaha surrounding the publication of my article captioned “THE PRESIDENT AND HIS PER DIEM = “LEGALIZED STEALING”, and in view of the heated emotions generated by the said publication, I am compelled to write to make certain things clearer and set the records straight.

In the first place, let me state for the record that in writing the said article I followed the dictates of my conscience as a citizen of a nation in search of a truly democratic system of government - a system where our leaders are held accountable for their actions and inactions. I have never been actuated by malice or political mischief in writing any of my articles. Whatever I write represents my understanding of events and situations as they unravel. I am not in the employ of any one person or a group of persons. I am nobody's political hatchet man. It is therefore strange that NPP political hacks continue to tie my articles to ex-President Rawlings, Professor Mills or the NDC party! It is no secret that I was a former chairman of the Greater Accra Regional Tribunal and a staunch believer in the democratic values of probity, accountability, sunshine, transparency and the rule of law. Let nobody be deceived: I truly admire our ex-President for having the courage to speak up for the downtrodden in their quest for true justice and accountability in the lead up to the June 4 and December 31 “revolutions”. This does not in any way make me his “stooge” or “hatchet man”. In fact, for all the years I spent in Ghana, I never met or spoke to our ex-President. The only time I personally saw him was at the JACKSON PARK in Kumasi. And, that was in 1979. Do I want to meet and talk to him one-on-one? You betcha!!!!

Regarding Professor Mills, I first met him in Legon. We were both die-hard supporters of that great club, Accra Hearts of Oak. I grew up loving him because of his humility, honesty and homely advice. It is no secret then that some of us continue to support him in his quest to become President of our nation. Honestly, I cannot even remember the last time I saw or spoke to him. It is, indeed, ridiculous for my vicious opponents to suggest that I am being “used” and “manipulated” by this venerable and noble man!

Those who have followed my articles know that I was a constant critic of the NDC while they were in power. There are some of us who truly believe that the NDC as a party owe more to our nation than any other party in Ghana for the simple reason that it owns its very existence to JUNE 4 and DECEMBER 31. Our article “IT'S NDC” which appeared on the Ghanaweb on September 11, this year bears eloquent testimony to this assertion. I have always advocated for a stronger and more credible NDC party as bulwark to the ruling NPP government. This does not mean that I do their dirty political work for them. In spite of all the negative and unprintable name-calling, I remain my own man.

Having said that much let me answer my critics regarding my said article: I have always maintained that the deliberate misuse of the free speech provision as constituted under Article 21(1) of our constitution should be frowned on by all peace loving and concerned citizens. Therefore to hide behind this eminent provision to cause political chaos or mischief or to bring any of our state institutions including the Presidency into disrepute is not only reckless but unconscionable. I have said many a time that what we write and believe in truly defines our character. Why on this God's earth should I accuse the President of “legally stealing” from the coffers of the state if I had no reason to believe the centrality of such assertion? Those who read my piece with an unjaundiced mind really understood the import of this statement:

“ONE UNIQUE REVELATION ABOUT THIS FINANCIAL SCANDAL IS THAT WE CANNOT GET ANY ANSWERS FROM THE PRESIDENT OR HIS NUMEROUS FORK-TONGUED SPOKESMEN ON THIS NATIONAL ISSUE. NOTWITHSTANDING THIS COWARDLY AND ANTI-TRANSPARENT ACT REASONABLE MEN AND WOMEN ARE BOUND TO ASK THES SIMPLE QUESTIONS”

What this plain statement should tell even a casual reader is that numerous attempts were made to get or confirmed the authenticity of the “rumor”. If, even at the height of this great debate, Mr. Dan Botwe, our information minister, does not even know how much per diem state officials are taking, then we should imagine whether a “poor soul” like me would be provided with any direct, truthful information regarding this issue by the powers that be! And, I don't want to believe that he did not check on this information regarding the President's per diem allowance before going to the studio to debate Mr. Ato Ahwoi! When did stonewalling become a democratic value and when did transparency and sunshine take the back seat in our valiant attempt at giving “positive change” and open government practical meaning? Didn't this government promise us a fluidly transparent and open government? As a reasonable, objective man presented with the intransigence of the government in providing us simple answers to our simple questions, I was bound to believe what I was told by my source.

More importantly, this so-called rumor has been making the rounds on the Ghanaweb and the Ghana news media for the longest. Let's make reference to two instances of this "rumor". Did Mr. Kofi Wayo a former NPP member made such an allegation sometime last year which news item was reported by the FREE PRESS and published by the Ghanaweb on JULY 10, 2004. Why didn't the government come out to deny such allegation? Did the Police go after Mr. Wayo? Again, in a feature article on December 6, 2004, one Kojo Poku stated without mincing words and I quote “"IT'S ONLY IN THE LAST 2 MONTHS THAT KUFFUOR REALIZED HE'S THE PRESIDENT OF GHANA ...NOT A "TOURIST PRESIDENT. HE MADE OVER 80 FOREIGN TRIPS IN LESS THAN FOUR YEARS COLLECTING $3000 PER DIEM FOR A DAY ALTHOUGH THE STATE PAYS FOR BOTH HIS HOTEL AND TRANSPORTATION..............." And, ladies and gentlemen, that was also a feature article which received prominent coverage! The legitimate question then is: Why didn't the government respond to the said article. Why did it take the publication of my article to force the government to release that feeble response by the Auditor General and the Police? Feeble, because their response did not fully address the core issue of how much the President is actually taking as per diem and how much he has taken since he came to power and whether any financial reports exist to account for these expenses. Now, are they trying to criminalize my article because this time it was written by a Rawlings's “stooge”, a former tribunal chairman, “NDC hatchet man”, or the “evil provocateur”? How did I cause “fear and alarm to the public” by just elucidating that which has been in the public domain for a very long time? If anything the government is rather creating fear and alarm in the public by stubbornly refusing to disclose figures pertaining to their salaries and per diem allowances while the mass of our people are confronted daily with acute shortages in their lives due to incompetence and corrupt activities of our leaders.

What is really baffling is that should one stand aloof if his or her real or imagined political foes are taking undue liberties with his or her good name? For example, should I remain silent if my political opponents unjustly accuse me of taking bribes while sitting as a tribunal chairman or that our sentences were outrageous or that judgments were written from the castle or the “blue gate”? Should I remain silent in the face of such undignified and brutal accusations that seek to besmirch my name? Shouldn't I readily and swiftly respond to such inflammatory and unfounded accusation to preserve my good name?

To those who strongly believe that I was driven more by political mischief, I say go back and re-read my piece. I was driven more by my desire to bring attention to per diem allowances and the inability or refusal of our Parliament to rein in such financial waste. I fervently believe that the monies expended on our state officials by way of per diem allowances can go a long way to alleviate some of the suffering of poor and marginalized folks in our society who continue to be shortchanged by our leaders. If we think that we can build for ourselves a workable democracy on the reluctance of our leaders to disclose information about their financial dealings, then we must be joking. In fact, if we want to avoid political instability in our country, it is incumbent on each and every one of us to demand strict accountability and probity from our leaders be he a Rawlings, Mills or Kuffour!

Let me state here that I harbor no fear in my heart. Neither am I intimidated by the action of the government and Police in this matter. I hold the Police no grudge. However, as a state institution, they should be wary of the political machination of the elite else they lose the respect and confidence of the very people they are supposed to protect. In the true spirit of our evolving democracy and my respect for the law, I am ever ready to assist the Police in this crucial matter should they need my assistance. It is my civic responsibility as a citizen of our great nation.

Lastly, I do not owe any of my very good friends in this government who are peeved any apology because the larger and paramount interest of our nation must be pursued. In any event, I still love them.

I rest my case for now. (WILLIAM ANTWI AKA BAFO “OYOO BUSANGA”) Views expressed by the author(s) do not necessarily reflect those of GhanaHomePage.