The President And His Per Diem Allowance = "Legalized Stealing"! 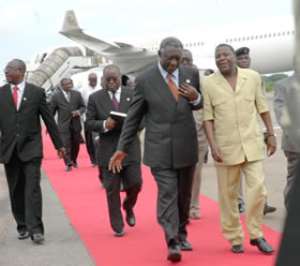 What is so outrageous about our present divisive political environment is that anything one says about the present administration is cruelly misconstrued for cheap political gains. One of such mischaracterization of what we say and believe in is the per diem allowance collected by our President, his hangers-on, ministers of state, parliamentarians etc; etc; when they travel outside the country on the nation's business. We rightly alluded to this crooked financial scheme in a published article entitled “ IT'S NDC TIME - THE ANATOMY OF A CREDIBLE OPPOSITION AND POPULAR FRUSTRATION”. Some NPP folks think we are actuated by political and economic malice. We seriously think they are dead wrong. We have our cogent reasons. We hope they have the intellectual and moral power to defend their position. The uncalled-for insults are not going to make this important national issue go away. We will surely continue to keep it on the front burner until they see wisdom. So here we go once more: “LEGALIZED STEALING” = STEALING IN THE NAME OF THE LAW!!!!!!!!! Legalized whaaaaaaaaaaat? Like the car loans for our parliamentarians, the President's per diem allowance is “legalized stealing”. We use the term “legalized stealing” in its most classic, street Ash Town sense to mean immorally appropriating a thing that does not belong to you by the use of legal means. In other words, it is stealing through the nose of the law - using the law as a cloak to take that which does not belong to you. Strictly speaking then, even though, the President cannot be efficiently prosecuted and convicted before our criminal courts including the regional tribunals, he can easily be tried and convicted in the court of public opinion! This is not character assassination. This is exposing and bringing razor attention to wrong financial dealings at the highest echelon of government when those involved blatantly refuse to see wisdom after repeated complaints. We are emboldened in our conviction because the President and Parliament have arrogantly and blatantly refused to put an end to this immoral financial scandal! WHY PER DIEM ALLOWANCE? Let's take this great and grave issue in full stride. One unique revelation about this financial scandal is that we cannot get any answers from the President or his numerous fork-tongued spokesmen on this national issue. Notwithstanding this cowardly and anti-transparent act reasonable men and women are bound to ask these simple, prime questions: 1. Why should a desperately poor nation like ours pay the President $3000 (27,000,000 million cedis by conservative estimates) every night he spends outside the country taking care of the nation's business when he doesn't pay for his air fare, hotel bills, meals, gifts to hosts etc, etc? And, it is a big “why”.

2. Does he account for the per diem allowance once he returns to the country? In other words, does our President file a financial report when he returns from any of his numerous trips abroad?

4. How much have we given to the President by way of per diem allowance since he became our respected President? To understand this issue let's try to explain what per diem allowance is. In its most classical sense, per day (Diem) allowance is meant to compensate for the legitimate - and we mean genuine - expenses made by the President, his ministers and entourage while traveling in or outside Ghana conducting the nation's business. Tersely put, it is the amount of money given or paid to officials who travel outside their post to take care of the country's business to enable them pay for hotel bills, meals, gifts to hosts etc; etc; which money must be strictly accounted for once the recipients return to post. It, therefore, stands to reason that all actual expenses incurred by the President for his subsistence while outside the country must be taken care of by the state while he is on official duty. It can easily be gleaned from the above that per diem allowance is not meant to profit the President's pocket. Therefore, under no circumstance should per diem allowance be viewed as supplementing any civil or public servant's salary or wage. This group, of course, includes His Excellency, Mr. J.A. Kuffour. Now, why should we be that energized and passionate about this issue? Can any fair minded person tell us what the policy justification is for this ill-conceived financial arrangement? Is there any redeeming value for the President's per diem allowance? We have said many a time that the nation must get down to brass tucks in attending to the sacred duty of putting our country on sound financial and moral footing if our experimental democracy is to take a firmer root in our dear country. The President, who is our very first citizen and the very embodiment of sound legal and moral principles, must necessarily start us on this noble course. In other words, since we all take great inspiration, pride and hope from him, his activities as our President must be above reproach. It is in this wise that we say without any remorse that the President's per allowance is one of the greatest financial scandals of our time but the one that has received the least outrage from pundits, social commentators and religious leaders. It is one of the least under-reported financial scandals of our generation!

It is no secret that the President is given $3000 anytime he spends a night outside the country like when he attended Eyadema's funeral or when he spent ten days in New York attending the General Assembly meeting. In the latter case, for instance, our poor nation paid the President $30,000. Ladies and gentlemen, our miserable nation put 270,000,000 cedis in the pocket of our President! This is exclusive of what ever amount we paid to his large entourage! If we are paying this much to the President for spending only ten days outside the country, can we imagine how much our President has pocketed since he came to power! And, this same Presidency has the moral nerve to tell us that the nation's coffers is so depleted that we cannot negotiate a reasonable pay package for our hard working teachers or put teaching equipments in our public schools or put beds and medicine in our public hospitals and clinics. To put it mildly, this financial hand-out for the President and members of his elite class viewed against the background of crushing poverty of the mass of our people is unconscionable and morally repugnant! It sins against high heavens! How can any leader of conscience take $3000 per diem allowance from the coffers of a nation in which the majority of its people live on less than a dollar a day? This is a tragedy!

We further state without any apologies that this is naked corruption at its blandest!

Bear with us for a brief moment: One aspect of this active financial scandal that baffles some of us is Parliament's deafening silence on this grave matter. In fact, it is really amazing that parliament - the overseer of our limited natural resources - has not taken up this matter as it should. Can we please ask if this is a class thing? We are tempted to think so because we seriously suspect that they are all in the take excerpt that the President is taking a far larger share of this dubious financial hand-out.

If this is not a diabolical conspiracy between the Presidency and Parliament, why should the latter acquiesce in such in-your-face, immoral financial scheme? The point here is that why should they complain about OR investigate that which immorally fills their pockets? And, I can bet my last dollar that Parliament cannot tell the nation how much the nation is wasting on per diem allowances! To be very fair to them, if the Presidency and Parliament truly believe in the premise of this financial hand-out, what is stopping them from being transparent about it? In fact, any financial figure they come up with will surely blow us apart and they just cannot stand the wrath of the people. That readily explains their silence!

And, more to the point: The idea that we can build a viable and sustainable society when our leaders look the other way when their class members “steal” the little that our poor nation has while the rest of the society - the majority, of course - struggle mightily to put one decent meal on the table is a ridiculous and absurd one! Yes, while they jealously protect their undeserved financial turf, the plight of the majority of our people continues to escalate! And, they want us to call this “democracy”?! This is a class thing and nothing more - a depraved system where the few at the top of the political ladder continue to humiliate the majority of the people in order to serve their insatiable greed for money and power! We want to state here and now that the Presidency and Parliament - two crucial components of our government - are playing monkey game with the financial health of our nation vis-à-vis the per diem allowances they continue to dish out to members of their class! Can we honestly ignore the fact that our President and Parliamentarians were elected based on one of their more solemn promises of putting our nation on a more responsible financial path by espousing high moral standard in public life? Sadly enough, we now live in a country where corruption is touted as a national “value”. If not, we will all be screaming our heads off about this despicable financial arrangement.

In view of the above, we can - without prejudice or envy - fairly conclude that our leaders (particularly our President) are awkwardly abusing their political mandate for personal profit which of course sins against the very mandate the people reposed them. We therefore have every conceivable reason to call this dubious financial hand-out “legalized stealing”. How many more dollars should we allow our President and his cabal to “legally steal” from the destitute before we garner the courage to say “enough is enough”! At times we look to high heavens and ask whoever is out there why he/she gave us such merciless and insatiably greedy leaders. Is it his way of punishing us for our “sins” or just to show us HIS/HER glory? Hmmmmmmmmmmm! We are still searching for that elusive answer. Meanwhile, as His Excellency savors in the grandness of his mighty office and “his parliament” continues to rubber stamp his most outrageous actions and inactions, he should think hard about his legacy. Is he going to be remembered by posterity as one who brought so great respect to his high office or the one who brought financial irresponsibility and shame to it?

Indeed, rational sense of national interest demands that he single-handedly put a stop to this graceless financial boondoggle because he has a legacy to protect. He should not leave the nation in financial ruins than he inherited! The President has more than three years - enough time - to redeem himself. He can honorably start doing this if he puts back all the monies he has taken from the national coffers by way of per diem allowance. Such an honorable act will surely stand him out among his contemporaries - a true leader who gracefully accepted a mistake and rectified the same. There is nothing shameful about such a patriotic action. It surely will win him more kudos which he definitely and desperately needs at this crucial time of his Presidency when the nation needs most his leadership.

As usual we rest our case.

We shall surely be back. WILLIAM ANTWI (AKA “BAFO” OYOO BUSANGA) NEW YORK, U.S.A. Views expressed by the author(s) do not necessarily reflect those of GhanaHomePage.