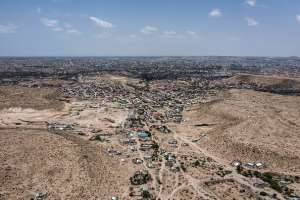 Many cities in Somaliland are growing rapidly. Climate change-induced displacement, insecurity, and population growth accelerate urbanisation. Yet, many urban residents live in dire poverty, lack adequate shelter, and have only limited access to basic infrastructures and services.

Two recent research projects focused on experiences of urbanisation from the perspective of people living at the urban margins. One explored displacement and security while the other looked at infrastructure access .

We found that both security and infrastructure access are deeply entangled in property relations. Property constitutes boundaries and shapes processes of inclusion and exclusion. It also influences urban experiences and differentiates city opportunities.

The urban real estate market in Somaliland lacks regulation and transparency. The urban margins are characterised by different types of land ownership and rent arrangements. None of these arrangements are formalised, not even in government-provided relocation areas.

Many poor people in the country's cities live in constant fear of evictions. Tenure insecurity shapes their experience of the city and limits their access to services, among them water and electricity.

Somaliland's economy is mostly market-driven and profit-oriented. State regulation is weak. Land grabbing prevails across cities and the countryside. As a result, land ownership is often contested.

Many cities experience a hike in land and real estate prices. Such price rallies are driven by post-war urban reconstruction and an increase in housing investment from Somaliland's large diaspora, wealthier residents, and private companies.

The investments improve the 'value' of land, and drive speculations. Similarly, the moment a plan for a new road (or any other public infrastructure) is announced in the reconstruction plan, people begin to scramble for land in the vicinity, driving up prices.

These investments are however contrasted by inner-city squatter settlements as camps that displaced urban newcomers establish in 'empty' places and at the outskirts of the cities.

In Hargeisa, for example, returnees from refugee camps in Ethiopia started to squat on state-owned land, including State House, from the mid 1990s. The State House used to host the British administration building during the colonial times. The squatters there were soon joined by people fleeing environmental shocks and violence from other parts of Somaliland, Somalia, and Ethiopia. The State House also attracted people who could not afford the rising rents elsewhere in the city.

The squatters fenced off plots, and over the years, have replaced the huts with shacks composed of corrugated iron sheets. An informal real estate market started to emerge with early squatters renting out or selling empty places and shacks to newcomers. These forms of property ownership are determining who has a right to the slum.

Another housing arrangement emerged on privately owned land. In Daami, an impoverished neighbourhood in Hargeisa's northeast, landlords are renting out pieces of land to poorer residents for establishing make-shift huts.

In both the privately rented and the squatter settlements, residents are not allowed to build more solid housing structures as this could create precedents for right to the place. Housing, therefore, remains transitional and the danger of evictions looms large.

In Daami, evictions already occur regularly. This is either because people fail to pay rent or landlords start to develop their property.

Plans for evictions of the State House, which is located on prime land in the city's centre, have been discussed for many years but recently moved up on the priority list of Hargeisa's urban planning.

Urban planning is not sufficient

To improve the tenure and housing security of its most vulnerable residents, Hargeisa has established two larger resettlement schemes in Digaale and Malawle at the far eastern and far western outskirts of the city respectively. To obtain control of land for these relocation areas, Hargeisa's municipality dispossessed private landowners. In Somaliland, if privately owned land is included in urban development plans, the government holds the right to take over 30% of the land for public use.

Supported by international organisations, the resettlement area was divided into small plots. In Digaale, the plots were equipped with a small house, usually composed of corrugated iron sheets, and every two households received a pit latrine to share. In Malawle, the government provided the land and the residents were supposed to reuse their former housing materials.

News of the planned resettlement and the aligned promise of land ownership circulated fast across Somaliland and further pulled people into the neighbourhoods selected for relocation. Vulnerability criteria were developed to select the most deserving beneficiaries. The final selection from the large pool of qualifying residents was based on a lottery system.

With their relocation, the new residents, ideally, became the owners of the land and house. Tenure security, therefore, was supposed to increase. In most cases, however, the government has not yet issued formal title deeds, and residents continue to fear evictions. For example, 20% of 104 interviewed residents in Digaale and 14% of 55 interviewed in Malawle still felt that evictions are extremely likely (Digaale 10%; Malawle 7%) or likely (Digaale 10%; Malawle 7%).

The distance of the relocation area from the town and the lack of roads and public transport additionally cut residents off from social networks and the labour market. The approach to relocating the urban poor to the city outskirts carries the further risk of ghettoisation and territorial stigmatisation

What should be done

Somaliland would need to start regulating both the urban real estate and the financial market. To mitigate some of the negative effects of land speculations, such as the fast rise of land and real estate prices, the country would need a pro-poor housing policy that does not relegate the urban poor further to the margins. At the very least, the relocation area needs access to urban infrastructures, including public transport, schooling and health care.

The research project 'Security on the Move: Everyday Security of IDPs in rapidly growing Somali Cities' was funded by ESRC/DFID (ES/R002355/1). 'Towards Trajectories of Inclusion: Making infrastructure work for the most marginalised' is funded by the UKRI Global Challenge Research Fund (ES/T008067/1).

By Jutta Bakonyi, Professor in Development and Conflict, Durham University And

More from Article
ModernGhana Links
100 Years Of Innovation And Inventions: South African Vice Chancellor Reflects On What's Next
Ghana Teacher Prize: Awarding Excellence, Prossionalism And Dedication
Nigeria at 62: The Labour of Our Heroes Past
TOP STORIES