More fury from Beijing, as new US delegation visits Taiwan 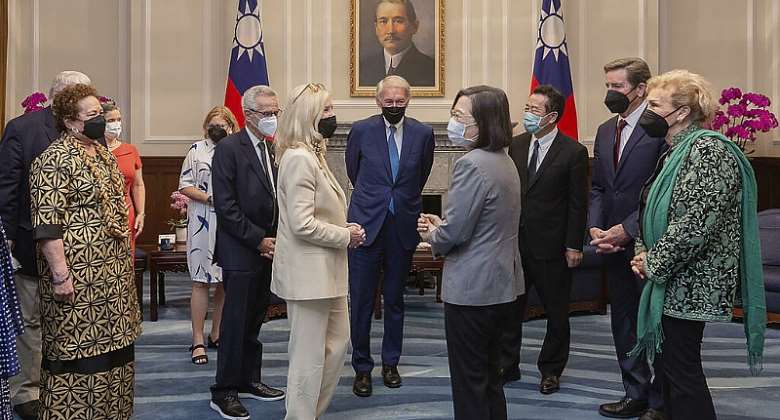 China announced ongoing military drills around Taiwan as the island's president met with members of a new US congressional delegation, in a further sign of support among American lawmakers for the self-governing island Beijing claims as its own.

On Monday, Taiwanese media showed the delegation arriving for the talks, but details of the meeting were not immediately released.

The delegation was due to depart later Monday on a US government plane.

The visit came less than two weeks after US House Speaker Nancy Pelosi's trip to Taiwan, which prompted days of threatening military exercises by China, including the firing of missiles over the island and into the Taiwan Strait.

Pelosi was the highest-level member of the US government to visit Taiwan in 25 years.

China also sent warplanes and navy ships across the waterway's median, which has long been a buffer between the sides that separated amid civil war in 1949.

China regards formal contacts between US politicians and the island's government as support for its independence from Beijing.

According to China's Defense Ministry and its Eastern Theatre Command, additional drills in the seas and skies surrounding Taiwan were announced by China's People's Liberation Army on Monday.

The exercises are intended as a “resolute response and solemn deterrent against collusion and provocation between the US and Taiwan," the ministry added.

China's previous two weeks of threatening exercises prompted Taiwan to put its military on alert, but were met largely with defiance and apathy among the public.

In Taipei, Taiwan's capital, the chair of the legislature's Foreign and National Defense Committee, Lo Chih-Cheng, met with the US lawmakers and stated that, “Their visit at this time is of great significance, because the Chinese military exercise is [intended] to deter US congressmen from visiting Taiwan.

“Their visit this time proves that China cannot stop politicians from any country to visit Taiwan, and it also conveys an important message that the American people stand with the Taiwanese people,” Lo added.

The five-member congressional delegation was led by Democratic Senator Ed Markey of Massachusetts and was to meet with other government and private sector representatives.

The other members of the delegation are Republican Representative Aumua Amata Coleman Radewagen, a delegate from American Samoa, and Democrats John Garamendi and Alan Lowenthal from California and Don Beyer from Virginia.

China accuses the US of encouraging independence forces in Taiwan through its sale of military equipment to the island and engaging with its officials.

The US maintains it does not support independence for Taiwan but that its differences with China should be resolved by peaceful means.