Kibera’s talking walls use art to spread peace during elections 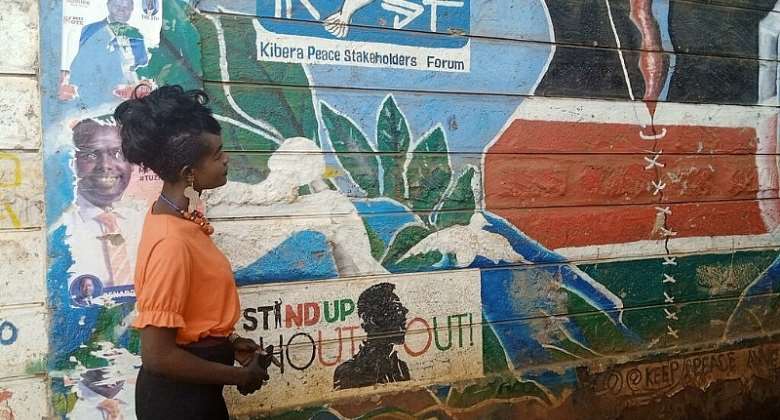 As Kenya's presidential and parliamentary candidates vie for office in the final frenzied week of campaigning, others worry about life after the elections.

The people of Kibera slums, six kilometres south of Kenya's capital city Nairobi, have paid the price in the past, living at the flashpoint of violence after highly contested and ethnically divisive elections.

For many, memories of guns, smoke and death are what they associate with elections.

Artists from various mediums are creating awareness in Kibera about the need to maintain peace during and after the elections.

Paint is the material of choice for Faith Atieno, popularly known as Fei, a celebrated graffiti artist who runs the Kibera 360 Arts Centre.

“Since not all of us have a voice to speak and be heard, as an artist I use paint, brush, words and pictures on walls  which people see, relate with and communicate about the issues that I feel need to be changed,”  the 34-year-old mother of one tells Africa Calling podcast.

Some 1100 people were killed during the 2007 post-election violence in protests over claims of stolen elections. Kenya again witnessed violence in 2013 and in 2017, when between 33 and 50 people died in Kibera, according to a report by Amnesty International.

Grafitti artist Atieno notes that when there is violence, the community suffers immensely due to the lost opportunities, and there was a need to keep spreading the message of peace to guard against loss of life and property.

“Elections are just held in a single day and after that people still need to live as a family and as a nation. If we fight we won't enjoy peace,” she says.

“The youth also need opportunities and fighting will deny them those chances and as a nation we will have lost,” Atieno explains, showing us a portrait of a man in apparent stress due to elusive peace.

Spreading the good energy of music

Performing as Jexx Kenya, he says that music has the capacity to spread good energy among the youth.

“Many youth like listening to modern music, so I write songs of peace to tell the youth that we need to live together, we should be united and not hold grudges against one another,” he says.

Ouma has implored the youth to love and care about one another using the power of music, because whether the candidates they support win or lose, life remains the same for them.

“The more a young man listens to music and hears that you are preaching peace, it will stick in his mind.  If he comes across a person spreading hate and violence the music will resonate in his mind and he will try and stop the violence,” he adds.

For music producer Daniel Okoth, who says he is behind the production of songs that speak against violence, there has been an upsurge of peace messaging in Kibera.

“Here people sing in vernacular and they sing to communicate to the people in the rural areas. So it is my responsibility to ensure that I collect the data and help reach the people,” he says.

The intensified nature of peace campaigns should help Kibera maintain peace after election day, say community-based organizations, but more needs to be done.

“I would encourage that we continue doing more because the information reaches more people in the community. Areas that have not been captured by murals and are known as areas of violence and conflict can use that as a platform to share peace messages,” says Everline Mbowa, executive director of Agape Women and Child Empowerment Foundation, a community organization based in Kibera.

Adwoa Safo will be present after Parliament’s recess, ready ...
56 minutes ago