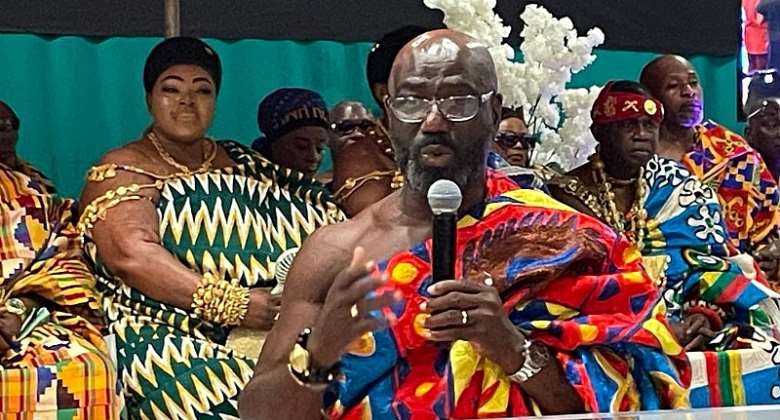 The Director of Diaspora Affairs at the Office of the President, Jubilee House, Akwasi Awuah Ababio has on behalf of Ghana’s President, Nana Addo Dankwa Akufo-Addo, officially inaugurated, Asanteman Europe, a group of Asantes on the European continent.

He was assisted by Ghana’s Ambassador to the Netherlands, Francis Denti Kotia and an Information Technology (IT) consultant, Dr James Owusu to declare Asanteman Europe duly inaugurated.

Asanteman Europe is made up of 15 member associations from 11 countries which are the Netherlands, Norway, Austria, Belgium, Germany, Switzerland, Finland, Italy, Sweden, Denmark and the United Kingdom (UK).

There are some Asanteman associations in other European countries which are yet to be officially registered and yet to be recognised by Asanteman Europe.

However, during the inauguration in Amsterdam at the 1000-capacity building at Schepenbergweg 15, 1105 AS, the venue was filled to the brim, leaving many attendants waiting outside.

Aside cultural display, the occasion also created opportunities for social gathering and networking; not forgetting the fund raising segment which was at the climax of the event considering the theme: “Empowering the Ghanaian Child through Education - the role of Asanteman Europe”.

Speaking on the theme for the inauguration, Mr Awuah said the theme was in eye contact with President Akufo-Addo’s vision to increase literacy in Ghana.

He added that Ghana Central Government launched the Free SHS as Education Policy in 2017, stressing that education serves as the bedrock for development.

For this reason, he said the formation of Asanteman Europe and its inauguration was in synch with the ideology of President Nana Addo Dankwa Akufo-Addo if not to eliminate, to reduce illiteracy in the country in the coming years.

He said in the past few years, COVID-19 as global pandemic had badly affected investment in Ghana and that he seized the opportunity to entreat Ghanaians in diaspora not to hesitate to invest in Ghana now that the pandemic is under control.

He said small or heavy investments from Ghanaians in diaspora, especially members of Asanteman Europe, could help the government's efforts in turning the fortunes of Ghana to become the country “we all intend to see it become”.

He applauded Nananom and Executives of the Asanteman Europe for their contributions to Ghana in the area of education and health, saying that “these are some of the group investments that are good examples for many Ghanaians in diaspora to learn”.

He said as Ghanaians in Europe, it was pertinent to realise their cultural identities as they integrate with other nationals in different European countries.

He added that as much as integration and diversity were important in a multicultural environment, it behoves smart people to pause to value their own culture, while living in the midst of many other cultures, “so together we all help to reshape, repackage our culture to rebuild our country Ghana”.

President of Asanteman Europe, Papa Yaw Agyei was joined by his two deputies Barima Asabre and Oppong Akosah to explain the education project Asanteman Europe was embarking on.

He said the association is yet to agree on some selected areas to begin ICT learning centres where laptop computers could be shared to some deprived communities in the area of teaching and learning to catch up with the IT world.

That notwithstanding, he said it was possible to begin ICT learning centres in three rural areas in Kumawu, Mampong and Offinso as a pilot project for some period after which it will be extended to other equally deprived areas of Asanteman.

“Our ICT project is not only to support education in deprived areas of Ghana, but it could also provide jobs as much as job creation is important for the country”, he stated and asked all and sundry to continue to donate both in kind and cash to the project in the area of education and job.

OSP not enough to win the fight against corruption — Micheal...
40 minutes ago