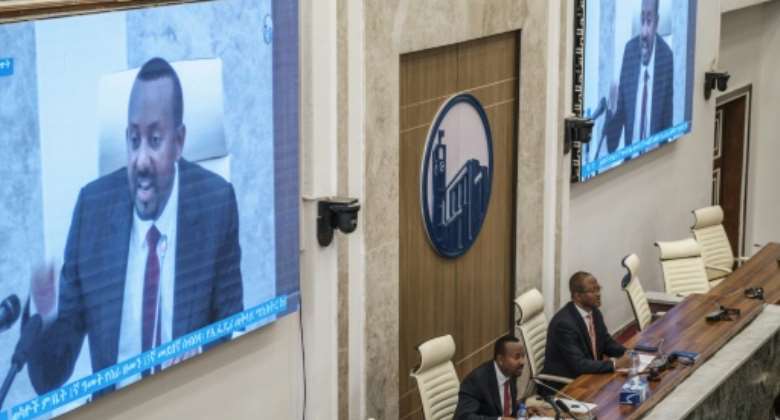 Dispelling speculation secret talks were already under way with the TPLF, Abiy said the government had set up a committee to look at holding talks. By EDUARDO SOTERAS (AFP)

Ethiopia's Prime Minister Abiy Ahmed on Tuesday spoke for the first time about the possibility of peace negotiations with Tigrayan rebels, who have been locked in a 19-month war with federal forces.

Dispelling speculation that secret talks were already under way with the Tigray People's Liberation Front (TPLF), Abiy said the government had created a committee to consider holding negotiations.

"It is not so simple to conduct negotiations. There is a lot of work to be done (before) and a committee has been set up", Abiy told Ethiopian MPs.

The committee will be headed by Deputy Prime Minister Demeke Mekonen, who also serves as foreign minister, and will draft a report detailing the preconditions for negotiations, he said.

The comments follow the government's declaration of an "indefinite humanitarian truce" in March, paving the way for aid to reach the war-battered region of Tigray for the first time since mid-December.

The conflict has driven hundreds of thousands of people to the brink of famine, displaced more than two million and left more than nine million in need of food aid, according to the United Nations.

"Peace isn't something you hide," Abiy told lawmakers in response to rumoured talks with the rebels.

In an open letter published late Tuesday, but dated Monday, the TPLF said it was ready to take part in a "credible, impartial and principled peace process".

But it lashed out at mediation efforts led by African Union envoy Olusegun Obasanjo, the former Nigerian president.

"The proximity of the High Representative (Obasanjo) to the prime minister of Ethiopia has not gone unnoticed by our people," said the letter by TPLF leader Debretsion Gebremichael, which also denounced "the silence of the African Union over the war and the atrocities perpetrated by the forces ranged against us".

He also for the first time referred publicly to an "existing agreement" among the rivals to meet in Nairobi for negotiations hosted by Kenyan President Uhuru Kenyatta, whose government has been active in efforts to find peace in Ethiopia.

The thorny question of western Tigray -- claimed by both Amharas and Tigrayans -- is among the issues expected to come up in any negotiations.

Tigray is the northernmost region of Ethiopia. By (AFP)

The TPLF has repeatedly said western Tigray, which has been occupied by Amhara forces since the war erupted in November 2020, is a "non-negotiable" part of Tigray.

"Any lasting solution of the current crisis must be predicated on the re-establishment of the pre-war status quo ante," the TPLF said last week, calling for "the complete and verified withdrawal of all invading forces from every square inch of Tigrayan territory".

The TPLF has already asked the UN Security Council to ensure the withdrawal of Amhara and Eritrean forces from the region.

The conflict began in November 2020 when the government sent federal troops into Tigray to topple the TPLF, the region's former ruling party, saying it was in response to rebel attacks on army camps.

After the TPLF mounted a shock comeback in June, retaking Tigray and then expanding into the neighbouring regions of Afar and Amhara, fighting intensified in the second half of 2021, before reaching a stalemate.

Accounts have emerged of mass rapes and massacres during the conflict, with both sides accused of human rights violations.

The humanitarian situation in Tigray also remains dire, with the region still without essential services such as electricity, communications and banking, while only limited relief supplies are reaching the region.

The UN's humanitarian agency OCHA said in a weekend statement that more than 65,500 tonnes of food had been shipped to Tigray's capital Mekele via road between April 1 and June 6.

"Despite this positive progress, significant gaps remain to address the vast humanitarian needs in Tigray, primarily fuel shortage," it said.

We love Adwoa Safo but it may be too late for her – Dome Kwa...
18 minutes ago