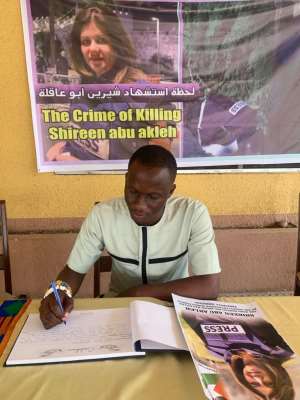 The Al Jazeera news channel where she reports and Palestinian authorities said she was shot by Israeli troops. Israel has said she was caught in crossfire. Abu Akleh was wearing a press vest and was standing with other journalists when she was killed. Another Al Jazeera journalist, Ali al-Samoudi, was also wounded by a bullet in the back at the scene. He is now in stable condition.

Mr. Apetorgbor, who is a renowned journalist in paying tribute in a book of condolences opened for late Abu Akleh at the Palestinian Embassy in Accra, described her as an icon of bravery in journalism whose selfless commitment to issues has impacted positively on humanity across the globe.

He also described the murder of the late Al Jazeera news channel reporter as 'barbaric' and an attack on press freedom.

"Her death is a big loss to the journalism profession, the people of Palestinian and the world at large…the unjustifiable murder of the noble journalist is barbaric and attack on press freedom in the world. ," Mr. Apetorgbor who doubles as deputy communications officer for the NDC Anyaa Sowutuom constituency said.

He also called on the international community to investigate the circumstances of her death and injury of Ali al-Samoudi, was also wounded by a bullet in the back at the scene.

Mr. Apetorgbor says the assailants and their backers must be apprehended and brought to face justice.

He asked Almighty God to grant her peaceful repose and her family fortitude to bear the loss.

Abu Akleh’s killing has emerged as the latest flash point in the chronic tension between Israel and Palestinians in East Jerusalem, the West Bank and the Gaza Strip. Reports had indicated that two reporters who were with Abu Akleh, and several other witnesses, have said that no firefight was happening near the spot where she was killed.