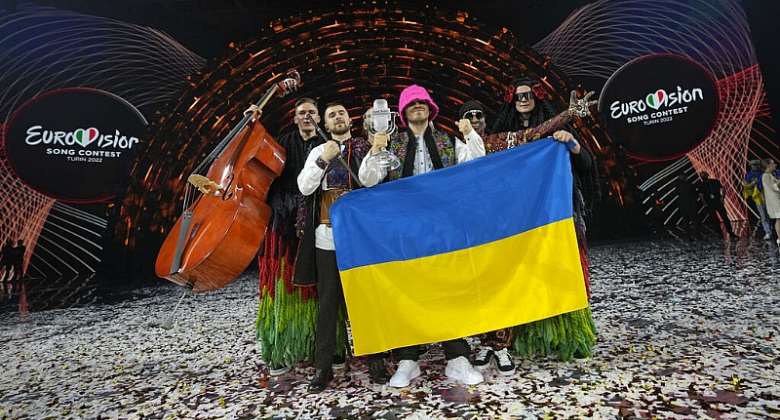 Kalush Orchestra from Ukraine claimed an emotional victory at the 2022 Eurovision Song Contest.

Sung in Ukrainian, the winning song Stefania fused rap with traditional folk music and was a tribute to the mother of the band's frontman Oleh Psiuk.

In the prelude to the competition, Kalush Orchestra said they were aiming to lift the spirits of their fellow Ukrainians who have fled the country or been fighting armed  forces sent into the country on 24 February by the Russian president Vladimir Putin.

A TV audience of nearly 200 million watched performers from around Europe belt out ballads, anthems and glitzy dance numbers.

France's entry from Alvan & Ahez, sung in the regional Breton language, failed to impress the judges.

After the jury scores were tabulated, the United Kingdom was leading the pack with 283 points, with Sweden and Spain on 258 and 231 points respectively.

But Ukraine swept the public vote from throughout Europe and Australia with 439 points.

With those numbers aggregated, Ukraine claimed their third triumph after successes in 2004 and 2016.

"Our courage impresses the world, our music conquers Europe," he wrote on Telegram.

"We will do our best to one day host the participants and guests of Eurovision in Ukrainian Mariupol. Free, peaceful, rebuilt," he added.