Can The NPP Really Arrest Rawlings 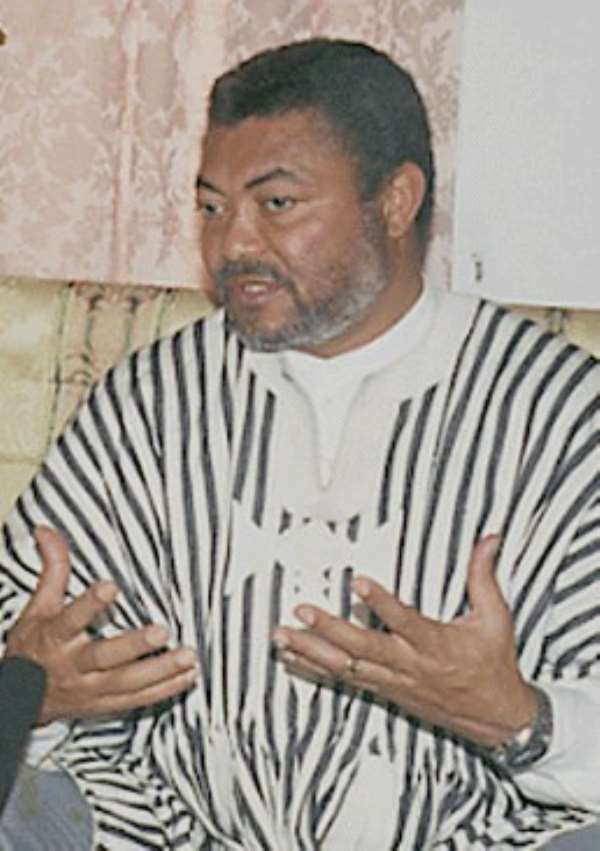 After dubiously playing the coup d'etat card without success, the NPP is not relenting in their effort to feed their partisan propaganda machine at the expense of the security and stability of our troubled nation with baseless and childish talk about arresting our ex-President for “certain inflammatory statements” which according to our Attorney General “seem to bring tension and some sort of insecurity into the country”.

Do we need to take or read the polls to know that the country is on the wrong track so far as uniting various antagonistic groups are concerned? Is there any doubt in anybody's mind that since coming to power the NPP had, out of pure hatred and their own bankrupt policies, allowed Mr. Rawlings to dictate how they govern the country? Isn't it that sad this administration could irresponsibly surrender the governance of the country to pursue a purely personal vendetta against our ex-president? We would definitely address this issue in future but for now let's ! eat legal and commonsensical red meat out of what our Attorney General offered.

So we simply ask: Can the NPP government cause the arrest of Rawlings even granted that his speeches before his millions of listeners and supporters are inflammatory, provocative, crude and un-presidential? Well, well, well, at what point in time does a political utterance become an indictable incitement or offence?

The all-important article 21(1) (a) says that “ALL PERSONS SHALL HAVE THE RIGHT TO FREEDOM OF SPEECH AND EXPRESSION ………………” We are going to restrict ourselves in this short piece to the alleged “indictable” speeches of Rawlings and in so doing expose them for what they are in the light of the Attorney General's comments – a legal nonsense!

Any discussion of this article must necessarily take into direct consideration its entrenched nature under the constitution. Thus the importance accorded free speech under our constitution should therefore not be underestimated by any entrenched political party or “powers that be”. Without question, free speech under girds our democratic experiment and for that matter everything should be done to protect same from individuals or group of individual who seek to curtail it for their own parochial political interests. Indeed, free speech offers the platform for exchanging ideas by various antagonistic groups (for example, the NPP and NDC) and thereby opening a dialogue for consensus building. It, therefore, affords without a fee the marketplace for the sale and purchase of ideas. Citizens are able to buy and sell which ideas best appeal to them without resorting to brainless violence or intimidation to impose their brand of political, social, religious or economic ideas. No wo! nder any attempt by any democratic government to intrude into this area of the law is usually met with serious scrutiny and suspicion not only by the courts but by all fair-minded citizens.

Notwithstanding the overwhelming importance of free speech to our democratic dispensation especially in our part of the world where our leaders are prone to autocratic tendencies, there are traditionally certain categories of speech which are deemed harmful to society. Of course, among them are defamation and advocacy of imminent lawless behavior. The convictions of commonsense dictate that some sort of speech be criminalized like inciting citizens to breach the peace. Such conduct, to say the least, is directly inimical to the survival of any democratic and peaceful society. No democracy worth its salt will stand ideal while an individual or group of individuals endeavor(s) to work up the emotions of a section of the population and agitate them into immediate and imminent violence.

The snag here is that if his advocacy (which it is, because, he has been speaking before group of individuals) was directed to INCITING AND PRODUCING imminent lawlessness or is likely to incite and produce such lawlessness then, Rawlings would have forfeited his protection under the constitution and thus subject to arrest by the state.

To be more provocative, let me try this example for clarification: Is the NPP going to cause the arrest of the Asantehene for advocating that the Asantes should stockpile ammunition to overthrow the NPP gov't? The answer is definitely a huge NO. The temptation here is to call for his arrest but he is well within his permissible constitutional bounds and therefore not subject to arrest by the law enforcement agencies. It is sufficient to note here that there was no immediate threat of violence or threat to overthrow the Kuffuor government. In other words the offensive or provocative advocacy was related to an illegal action at an indefinite future and therefore readily recognized under the constitution. It is worth noting here that what should inure to Rawlings's favor is the fact that no violence resulted after any of his robust and offensive speeches.

As we rightly cautioned the then interior minister, Mr. Malik, in the Nanumba case, we will once again entreat the NPP government acting through the law enforcement agencies to act prudently before taking any stupid and rash decision in arresting Rawlings because the man is acting well within his constitutionally guaranteed right of free speech and expression. The government cannot easily forget that they made similar provocative and offensive statements in the heat of the December 2000 elections. I supposed they knew they were acting well within their constitutional right of free speech and expression. So what has changed now? Playing politics with legal principles, eh?

Before Rawlings's unabashed haters start throwing emotional darts at me, let me here state that the opinion of the present writer does not exclude the government from carrying out its duty of protecting our struggling democracy by all available legal weapons. The government cannot afford to compromise the national security for fear an individual personality or group of individuals but they must at all times be guarded by the basic mandates of our constitution. In our peculiar political circumstances, the Attorney General in particular should not allow his judicial plate to be filled with reckless partisan political posturing! He should stop this needless political grandstanding! He should be reminded that the integrity of his high office and for that matter the entire judicial system is at stake!

As usual, we rest our case for now.

PS: I HAVE EXPRESSED SIMILAR LEGAL SENTIMENTS ELSEWHERE. ALL STATEMENTS ARE MADE WITHOUT ANY PREJUDICE. Views expressed by the author(s) do not necessarily reflect those of GhanaHomePage.