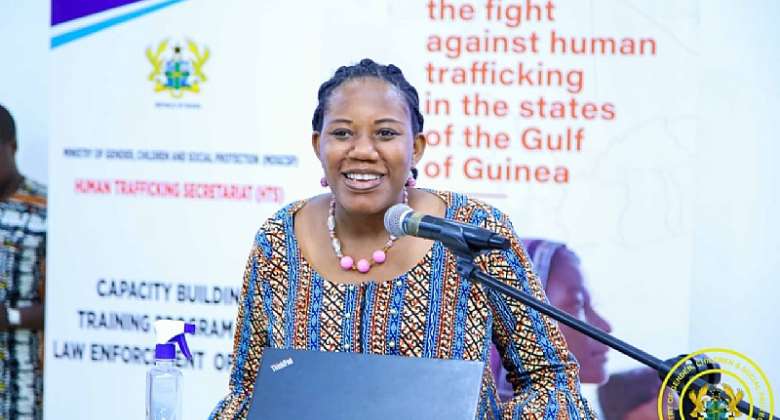 Over the past few years, Ghana has been known to be a source, transit, and destination country for men, women, and children subjected to forced labour and sex trafficking.

Out of a population of 28 million; 133 000 people are estimated to be living in modern slavery in Ghana.

Though, the government of Ghana in recent years has put in place measures to mitigate human trafficking in the country.

It is in this vein that the Human Trafficking Secretariat (HTS) seeks Expertise France support to conduct a 3-day training for some law enforcement officers and social workers in the Oti and Volta Regions following the monitoring visits.

This project, funded by the European Union through the European Union Emergency Trust Fund and France, is built around four components (namely the institutional and operational consolidation of interdepartmental bodies fighting against human trafficking, law enforcement, protection of victims, and regional cooperation), and aims to support the effective implementation of the NPA.

The general purpose of this training is to enhance the basic skills of law enforcement agencies and social workers with regard to the identification and management of human trafficking cases. It would also allow the HTS to further educate the targeted participants on the relevant laws relating to human trafficking.

Ms. Abena Annobea Asare, head of the human trafficking Secretariat at the Ministry of Gender, Children and Social Protection (MOGCSP) indicated that over 831 victims were rescued 31 prosecutions and 13 convictions were gained in 2021.

Speaking on behalf of Director MOGCSP, Dr. Asizah Zakariah, she said, the training is very important to equip men in uniform and on the ground in the fight against human trafficking in the country.

According to Ms. Abena Annobea Asare, traffickers have developed a new way of deceiving people into trafficking especially young girls; adding that human trafficking is the largest trade globally in the black market hence the training.

In an interview with Chief Supt. Mike Baah, " it is very important that law enforcement agencies acquaint themselves with laws to be ahead of criminals at all times.

Adding that the capacity training workshop will go a long way to help the officers in the fight against human trafficking beyond the borders of the country.

Volta Regional Police Command, COP Edward Odour Kwateng indicated that a data-based review that domestic trafficking is more than trans International trafficking in Ghana which most victims are children.

He said officers of the law must undergo constant training to be vail for the job at all times.