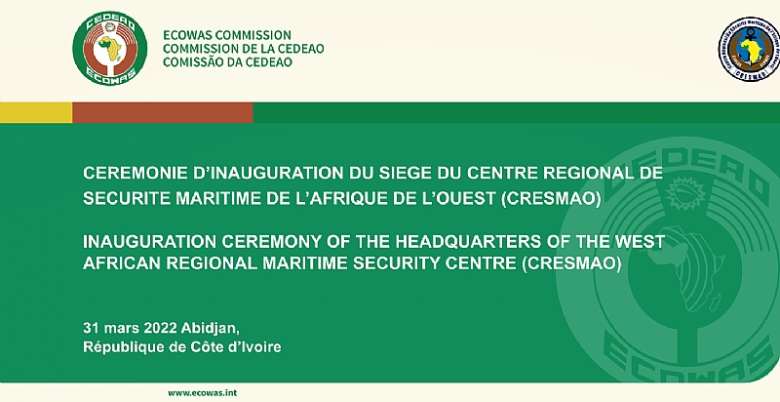 The West Africa Regional Maritime Security Centre (CRESMAO) in Abidjan, Cote d’Ivoire, will be officially opened on Thursday 31 March 2022, during a ceremony organised by the ECOWAS Commission and in collaboration with the Ivorian government.

Established by a decision of the Authority of Heads of State and Government on 31 July 2018, CRESMAO is an essential tool for implementing the ECOWAS Integrated Maritime Strategy (EIMS), which was adopted on 29 March 2014. The EIMS presents the overarching priority actions (for the region and the Member States) that will address challenges facing the maritime sector. It consists of five strategic objectives, namely: (i) maritime governance; (ii) maritime safety and security; (iii) management of the marine environment; (iv) ECOWAS maritime economy; (v) and maritime research and sensitisation

The CRESMAO aids in the implementation of the SMIC by coordinating the operational activities of the three (03) Multinational Maritime Coordination Centres (MCMCCs) in Zones E, F and G and monitoring the Code of Conduct resulting from the Yaoundé Summit of 25 June 2013. Specifically, the Centre provides information management and sharing, operational monitoring, crisis coordination, training and capacity building.

CRESMAO along with the MMCCs in zones E, F and G and the Maritime Operations Centres of Member States make up the regional maritime safety and security architecture established by ECOWAS to effectively tackle illegal acts in West Africa’s maritime space.

CRESMAO falls under the jurisdiction of the ECOWAS Commissioner for Political Affairs, Peace and Security.

The unveiling of the CRESMAO headquarters will witness the participation of an ECOWAS Commission delegation led by General Francis Behanzi, ECOWAS Commissioner for Political Affairs, Peace and Security, alongside the Ivoirian authorities.

The day’s events include the presentation of souvenirs (booklets) to the outgoing interim staff deployed to CRESMAO by the Ivoirian government, the official ribbon-cutting, a tour of the offices, press conference and a group photograph.

Ghana’s problem is pomposity, deception, lack of sincerity b...
23 minutes ago

Financial transactions will be allowed even without Ghana ca...
41 minutes ago