Shall our 8 Generals ever see "Justice" 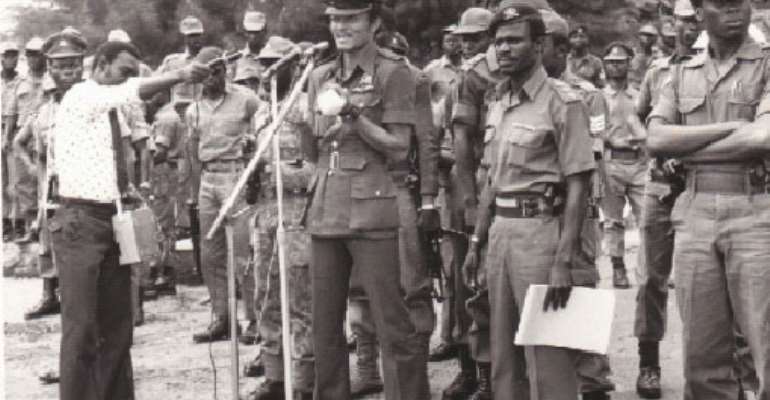 Fellow countrymen, it is only the “Truth” that shall set Ghanaians free from oppression and dictatorship; and ye shall not deny this.

A country full of “Lies” has a million miles to go with a heavy load on his head and shall never wonder why the journey seems to be long and too heavy. Fellow country, how efficient is the “Rule of Law “ in Ghana?.

Fellow countrymen, the new African is crowing like the cock. He is reminding those who are asleep to get ready for the battle of “Freedom and Justice” in Ghana. He is awaking the sleeping youth who´s human rights has be forfeited since 37(thirty seven) years ago. He is awaking those who have suffered injustice, and various atrocities under any regime being it UP, CPP, AFRC, PNDC, NDC or the present NPP, to wake up and demand without condition from President Kufuor to accelerate the removal of our famous “Indemnity Clause” from our constitution and to allow his people to reconcile with their brothers. They are awake to realize that their freedom is inextricably bound to their Justice.

Our 8 (Eight) Generals cannot walk alone. They need our solidarity and above all our courage to fight for Justice for their families they left behind. Shall they ever see “Justice” or some Ghanaians will say they are not our fathers so let them go to “HELL”.

Fellow countrymen let me remind you that, “The stick that was used to hit Mr. Baah, that same stick will be used to hit Mr. Tachi one day”. Ghana will never be a peaceful and law abiding country to live in, if our nationals will sit down unconcern to see their brothers being killed and tortured by few power drunkards and nefarious politicians whiles we dance “Halleluya praise the Lord”. Our great grand children will grow to see how selfish and irresponsible their forefathers were and they will never forsake us. We the Ghana Social Democratic Movement have vowed that there will be no single day that shall by-pass us without reminding our President of today and the entire citizens to wake up from their slums and excise their moral duties by making sure that these perpetrators are brought to Justice.

Fellow countrymen, the following statements will tell the story. The perpetrators said:

It is the legal prescription which drew the line that anybody who had actually since 1966 taken part in destroying an existing constitution, creating a defacto illegal government, managing that government and profiting illegally from it automatically became a target for execution.

It didn't require Rawlings or Boakye Djan or anybody to do that. And as a matter of fact when we were appointed as a council, people who were appointed also to implement that decision took no responsibility for it. They were carrying out orders. So if there is anything wrong with that decision and its implementation, it rests squarely with the collective body of AFRC.

Now once we were confronted with that, technically, apart from the irrational exuberance cry "let the blood flow", people throwing papers around with names, (in one particular case two hundred and forty seven names that were thrown on us including civilians, policemen, politician, and soldiers) I said no, that is not the way to go about it, but technically after our attention had been drawn to that definition then you find out that anybody who had actually taken part in an illegal regime in the process that I have defined could technically have been executed. Again our attention was drawn to an existing Armed Forces Regulation which is called the Superior Order Rule which incidentally was used to convert NRC into SMC in 1975.

If something happens and it comes from the superior authority, that superior authority takes responsibility for it. It doesn't matter who is down the line and who took part in implementing it. So we used that to draw a line that in that case only members of NLC 1966-1969, NRC1972-1975, SMC 1975-1978 and SMCII 1978-1979 who occupied both legislative and executive authority in these councils had the ultimate responsibilities and authority for the four processes that I have described.

Therefore, in our books the key words were automatic capital punishment. Then the question arose as to what do you do with subordinate officers, commissioners of states, those who went into parastatals as executives and all that? You can't reverse that but having said that sometimes I ask myself why is it that of the eight generals whose sanctioned executions by the Council of AFRC, his has excited so much irrational, I would like to say, interest. I can understand, but then let me put the records straight as much as I can. It is linked up with the issue of sanctioned executions of the 8 generals under AFRC.

The Armed Forces Act also makes it clear that there are two types of substantive punishments; a capital punishment and custodial punishment. So we said that any other officers in uniform who occupy any subordinate position in that hierarchy was caught in automatic custodial sentence.

It was those in the Armed Forces who actually took the machinery of the Armed Forces into politics and invited these people to assist them so they could not be caught in this [definition]. So our punishment targeted only members of the Armed Forces . We took the NLC - Ankrah, Kotoka, Ocran and Afrifa, were the only four officers who served in the NLC. So only these officers were caught in the ring of automatic capital punishment. We didn't need to prove their crime because they served in those positions. The execution was a collective sanction of AFRC and not an individual sanction. Is an individual allowed to say that I wasn't part of it? Otherwise no institution can move in this world. Now Afrifa, for whatever reason, was the only one available to be tried and executed alongside the generals who had committed the same four offences. End of their statements.

Fellow countrymen, you´ve just head what those who were given license to kill and torture innocent Ghanaians have to say. Very importantly they said: “We didn't need to prove their crime because they served in those positions. The execution was a collective sanction of AFRC and not an individual sanction. I wish I am an attorney general to prove them right. Yes, they have the mandate to kill and go Scott-free. That is what our meaningless Ghana constitution is saying, or else the state will not be lips-tight as to determine who is who to prosecute those criminals. I wish to live and see if any other law will be left out to prosecute any out- going regime for killing or for any corruption charges. It is said: “Do not to others the things that you don´t want to be done to you”. Will our 8 (eight) Generals see JUSTICE?.

It is said: “No one is above the Law”, but this is never true in Ghana so-long as the introduction of the “Indemnity Clause” by the criminals has been justified because when it is retrieved, any out-going regime will be caught in the spiders-web. They will then have to face the Law, and there is no law in Ghana. They are all liars.

Fellow countrymen, our movement the GSDM will put the records straight and let them all face the “Rule of Law” if any exists in Ghana. “They can run but cannot hide”.

Where are our lawyers and intellectuals?. Please stand up and defend our country. Long live Ghana. God bless you. Prince Aidoo Junior Ghana Social Democratic Movement Views expressed by the author(s) do not necessarily reflect those of GhanaHomePage.

No More Importation Of Overaged, Accident Cars From October
3 hours ago