The Death Penalty for Public Crimes: Will It Help Restore Integrity in Ghana? 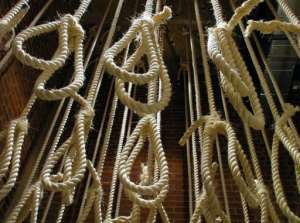 Many people are amazed at the recent economic reports of Ghana and shocked that Ghana’s revenues are not matching expenses. The Debt to GDP ratio is reported to be close to 80%, meaning payments of our debt principal and interests are almost as much as moneys generated by revenues, leaving little room to even pay workers!

That is reckless management. It is more than reckless! Many people believe there is corruption and public theft and malfeasance that are not being prosecuted and punished. Discipline must be restored before Ghana is sold to some foreigners! Those responsible must pay the ultimate price!

In Ghana nothing seems to scare people more than death. Should Ghana then restore the death penalty after 65 years of political independence and 56 years after the overthrow of Kwame Nkrumah?

Nobody is saying that we should use Biblical means to manage a modern nation. However wisdom has not changed since the beginning of time. The Bible has some interesting passages of wisdom. Among my favorites are these:

Ghana was one of the First Nations to emerge from Colonial rule in 1957 exactly 65 years ago today March 6. Smaller less endowed nations in other cultures and continents such as Singapore and Korea and Malaysia are doing far better socially, economically and in human development- despite about the same opportunities for higher education from Western as well as Eastern-bloc nations like Russia and Poland.

So what was the difference?

The difference in the socio-economic and human development outcomes or expected performance, as revealed in a 3 year PhD dissertation study (Danso, K.A., 2006), lay in the cultural differences and not intelligence or education.

Ghana was blessed after independence with the goodwill from all nations. Thousands of scholarships were provided to our most brilliant students but the leadership was beset with so much strife and hatred towards the first winner. There were many assassination attempts on Nkrumah’s life.

After the 1966 coup, those who took over tried everything to justify the coup and demonize Nkrumah with false accusations and fake tales. In fact reports after the 1966 coup accused Nkrumah of many things including finding a human head in a refrigerator in the Flagstaff House! Accusing a popular President highly regarded around Africa and the world of cannibalism and false unproven charges, did major damage to the image of Ghana and that of Africa and the black race.

The lack of discipline that followed the coup can only be described as worse than that of children! Workers in rural areas were being paid for years without much productivity. Ghost names started at that time as love for country turned to “what can you steal from Government or Broni-Adwuma”. Selfishness and greed began a new level that has escalated to today when borrowed moneys end up in the pockets of politicians as rural schools and clinics are left with not even buildings and supplies! Today, as world Bank and IMF loans are being sought, our President has the wickedness to order private Jets and also charter them at a reported $5,000 to $9,000 per hour.

The lack of sensitivity of our leadership to the plight of the people, coupled with the greed of the elected and appointed politicians, must be noted! These have led to a situation where frustration has led to many including the Dean of the Ghana Law School, to caution the nation about a ripe atmosphere and hence potential for military coup! What a sad state of the nation of Ghana after 65 years!

The FUTURE of GHANA:

The massive loans incurred by our political leadership, mostly without open accountability, and using Ghana’s minerals and oil as collateral, threatens the very existence of the nation. With the recent leadership opening the doors widely for unlimited and uncontrolled Chinese immigrant population doing surface mining and ruining lands and rivers, the fear deepens. Many are afraid of the Chinese taking over as soon as Ghana defaults on the loans. So who is to blame?

When the time comes, will Akufo Addo, Ken Ofori Atta, and their family members wielding power today be around to pay the price? Will the family of ex-President John Mahama be around Ghana?

This is the most serious question we as a nation must think about! What is an appropriate deterrent from these public crimes that threatens our very nation’s survival?

Some of us have been blessed to reach a ripe age exceeding the Biblical three score and ten. We could not have been that foolish as the good book said, to part with our moneys.

So why are those in power trying to borrow so much and spend so much and put our people into servitude as the good book said?

To try to use technology to cover the poor financial planning and to tax the poor suffering Ghanaians as e-LEVY has been described by a writer as e-FRAUD!

It is this writers suggestion that those who try to rob a nation like Ghana and impoverish everybody, ruin the lands and rivers without any sense of respect and dignity, deserve not to live. No! We need to use laws and rules to deal with the greed and selfishness in public service. We cannot rely on military intervention. Soldiers have not been proven to be any smarter or more honest that civilians.

I am strongly proposing the death penalty for anybody who in our public service jobs, is found to have caused massive financial losses to the nation, or jeopardized the nation and her people with fraudulent contracts or dealings for self gain.

We are 65 years old and those who are not

honest, mature and dedicated enough to provide public service should stay private and earn their money! For those who enter public service either as elected, appointed or hired, the people expect public service, or we demand the death penalty.

May Good Bless Ghana and her people and give us wisdom and bless us with honest leaders!