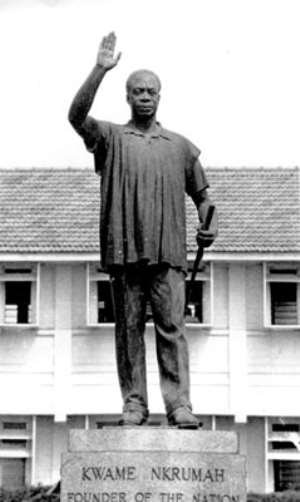 Fellow Countrymen, The new African in who´s name I speak, once said: “If someone hates you, he hates even your chickens”. This saying can be attributed to what we hear and see in our lifetime. One may ask, why should my enemy even hate my chickens?. What have these little chickens got to do with the problems between us?. Yes, he has the right to hate your chickens because they will produce eggs when they grow and become your Christmas chicken soup, so they have to do away with them before they can even grow old. Today one may ask why his enemies will still like to kill even his chickens?. Who are those who really hate Nkrumah?. To paraphrase the words of Geoffrey Bing, Attorney General under Nkrumah and a former Labor MP of United Kingdom, whatever Nkrumah did, “ineffectual or confused,” he nonetheless represented a challenge for the West.! For it was this challenge that caused the West “to mount such a powerful and sustained counter-offensive” against him.

One may therefore ask, whether those Ghanaians who helped the enemy in the killing Kwame Nkrumah are all dead, or some of them are still alive?. The new African once said: “If you have nothing good to offer your father in-law, don´t steal whatever he has”. If Ghanaians has nothing positive to say about the one who gave them freedom, will the following false allegations justify his deeds?. Are we saying “Thank You”?.

Fellow countrymen, let´s listen to what someone has to say:

According to a so-called Prophet Baidoo, Dr. Kwame Nkrumah put the country in bondage when he used a pregnant woman's blood to make a god that he called Kankan Nyame. “After Independence, whoever has sat on the throne of the presidency has never had it easy ruling the country . At the end, Ghanaians lie in difficulties.”

Describing the Kankan Nyame, the prophet said, “Dr. Nkrumah made a pregnant woman kneel, tied seven white handkerchiefs around her neck, and hands. There were some bowls around the pregnant woman containing human blood and human skulls placed in-between the bowls.”

According to him, Nkrumah kept this god at the Flagstaff house and at the castle.

He described the star in a hand with the inscription Gye Nyame on the country's bank notes as juju and could be attributed to the fallen value of the Cedi.

The so-called Man of God further said bloodshed would continue as it happened at the stadium disaster if Ghanaians continued to accept blood as stated in the national song, Yen ara asase ni.

“Some of the juju medicine was also kept in the Peduase Lodge and at the Osu cemetery. When invited, I will be able to show and prove where it was buried at Osu cemetery,” he added. End of statement.

Fellow countrymen, if Kwame Nkrumah really believed in gods and idols then let us hear what he Osagyefo had to say in one of his books quoted by Michael Gyamerah on (page 105 of Dark Days In Ghana):

"A particularly nauseating part of the smear campaign was the putting of a dead woman and child into a refrigerator at Flagstaff House, saying that this was 'Kwame Nkrumah's juju', and inviting public inspection. The woman and child were among those murdered on 24 th February. But the public turned the open invitation to Flagstaff House into a kind of pilgrimage and the inspection offer had to be quickly withdrawn".

Contrary to claims by Nkrumah's opponents, it is the UP/NPP tradition that is superstitious and obsessed with "juju". Nothing is more revealing than the account in the London Observer from Cameron Duodu their correspondent after the coup describing the assassination of Major-General Barwah in the 1966 coup:

As Osagyefo Dr. Kwame Nkrumah pointed out in "Dark Days In Ghana" (page 22):

"When the counter coup of April 1967 took place Kotoka's 'magic' could not save him. Unlike Barwah he surrounded without protest or struggle to those who had captured him at his headquarters. His 'juju' did not prevent him being shot in his turn".

Fellow countrymen, this is the stage Ghanaians find themselves after condoling and conniving with the imperialist to destroy our nation with the same blaspheme. Has the imperialist not succeeded in planting their wicked deeds in the brains of many of our own Ghanaians?. We all know that those who helped in his overthrow are still alive holding the highest post in our country. It is said: “ The evil that me do will always live after them”. Today after 39 years someone is saying that his god has revealed to him that: “the suffering of the people of Ghana since independence to the involvement of Ghana's first President, Dr. Kwame Nkrumah and his successors in idol worship”.

Fellow countrymen, I think if this allegation is true, then someone out there with a clear mind will ask whether his so-called god that revealed this to him was so blind our forgetful to remind him of there are many idol gods that are being worshipped in most houses in Ghana before he was born. What about our gods and idols found in our Kings and Queens home?. One may perhaps ask are those gods protecting our nation or they are also part of the “Woes” that we have.

Fellow country, if Ghanaians have nothing to praise him, is it justified to kill his spirit?.

Today Nkrumah´s enemies are jubilating for instigating such false accusations. Yes they are jubilating because they have realized that they failed to present anything better than that of Nkrumah to the people. Fellow countrymen, one more thing is sure; we shall make sure that perpetrators are brought to justice. This Prophet will be compelled to prove his case by showing all the places he claimed in his story so that Ghanaians will be freed from our woes if found, or has to face justice for defaming the character of the great one. True democracy demands freedom of speech, and at the same time demands responsibility. There will be a new Ghana where our children will be trained to speak their minds and as well be prepared to face justice if the words from their mouths are destructive and full of lies. God bless you. Views expressed by the author(s) do not necessarily reflect those of GhanaHomePage.

President Akufo-Addo Finally Reveals What He Does In Self-Qu...
6 minutes ago