The resurgence of Communal Labour, A prospect for rapid development in Daffiama, Bussie, Issa 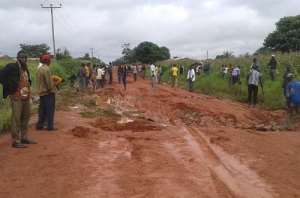 The most difficult aspect of writing is the definition of terms that apparently transcends one area of study. Particularly so, when communalism is not only broad but forms the foundation of African Philosophy. It is against this backdrop, I intend to offer a simplistic and general explanation to “communal labour.”Communal labour depicts a situation where members of a defined or particular community jointly carry out an activity that is beneficial to the entire community. While it is largely voluntary, participation is part of the identity of a member. Psychologists consider communal labour as a constructive or purposive group behavior. There is a shared vision acceptable by all without any legally recognizable standards.

Unfortunately, that spirit of communalism had vanished, perhaps, for reasons of globalization and importation of western culture that is largely embedded in the spirit of individualism. This has shifted the burden of development on government alone, which has to mobilize all the factors of production including labour to develop our communities. The individual is no longer at the center of development and so people shirk basic responsibilities that would have contributed to making their lives better.

The rippling impact has been that, there is an overburdening cost of development, making the spate of development almost stagnant or slow.

I have observed a new wave where the spirit of communal labour is rekindled in various forms, as many communities across the Daffiama, Bussie, Issa District are beginning to define their own path of development by initiating various community development projects. There are numerous examples to set.

The Wogu Development Association for instance, has initiated and indeed completed various projects in the community without government support. I have seen for myself, a beautiful edifice built as a community Information Technology Center, to serve as a resource center for both students and researchers.

Another clear example is the activities of a popular youth group known as Peace Camp in Fian. It is made of young men and women who marshal their arsenals to develop their community. Currently, they are building a nursery school for the community. They have also provided labour in the building of a labour ward, a community initiative to expand the Fian Health Center. The Owlo community has just completed a labour ward at their CHPS. They came together, mobilized resources from their Member of Parliament and other stakeholders to construct that beautiful building. I am aware, there are plans to start another project over there. The people of Bussie have also depended on their own labour to build a medical ward. As I speak, it is more than 65 percent completed. In Issa, similar projects are initiated. The story isn’t different in Daffiama and Kojokperi. What is more refreshing is the fact that, the elite class that is mostly working and residing outside the district, do contribute financially in supporting such projects.

For me, this narrative presents a prospect of a new investment approach in community development. Government, NGOs and other Development Agents must consider this as a positive development in the area. This spirit scales down the cost of development especially in the provision of infrastructure and government must be interested in adopting this approach, community government partnership, in executing development. That will not only speed up development but will also provide the best opportunity for people to contribute collectively to development.

In 2013, the government of Ghana initiated the Ghana Social Opportunity Project (GSOP) policy to leverage the available man power of communities for development especially during the agricultural off-season. The policy do not only encourage people to take part in the development of their own communities but also improves targeting in social protection spending, increasing access to cash transfers and extending employment to the rural folks. The outcome of this policy is evident across the Upper West Region.

The cumulative effect would be that; development will be speedy, the cost of projects will decrease, and the people will see the need for a good maintenance culture and appreciate the practical need for taxation. Beyond these, the people will always remain united beyond partisan considerations and that, in essence, will become the genesis in the building of an ideal society.

Verily verily, there is light at the end of the tunnel if policy makers appreciate this resurgence of hope, unity, concerted and collective effort among citizens, in their quests to see development in their communities. Let’s not let this virgin opportunity slip out of our hand as a country.

More Feature Article
ModernGhana Links
Deborah's Lynching and the Hypocrisy of Humanity's Morality: A Sign of Deep-seated Hatred
Only Ghana's private sectors most innovative green entrepreneurs can get us out of the deep hole we are now in
Let Mahama go unopposed
Ghanaians Need an NDC Development Agenda, Not Sheer Bluster
Supreme Court Is Not Obligated to Hear Each and Every Case
Morbid Matters: Estimating COVID-19 Mortality
Presby Moderator Is Both Right and Wrong on Taxation in Ghana
Our solid believe in the whirlwind will eventually settle is militating against the progress of Ghana
The Real Psychology of These Political Aspirants Towards Buhari, They Took The President And The Work Of Government For A Joke
TOP STORIES