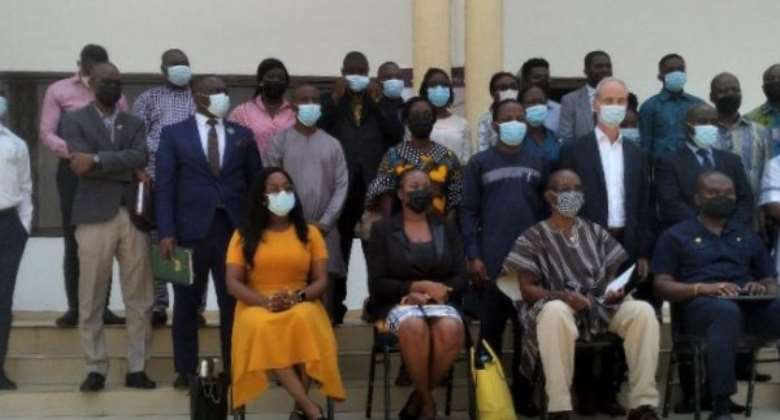 Ghana's exports are undervalued by approximately $8.3 billion in constant prices (base year 2011), or $3.8 billion in current prices.

The undervaluation is equivalent to approximately 11 per cent of the total gold exports between 2011 and 2017.

Total estimated tax base erosion from Ghana due to this undervaluation of gold exports equals $2billion in constant prices.

Dr Ama Ahene-Codjoe, Economics Researcher at the Institute of Statistical, Social and Economic Research (ISSER), said trade mispricing occurred when one or both trading partners deliberately misreport the value, quantity or nature of goods or services in a commercial transaction.

Dr Ahene-Codjoe was speaking at the Multi-Stakeholder Workshop on Illicit Financial Flow (IFF) Risks in Gold Trading: Risks and Policy Options for Ghana in Accra on Tuesday.

The Researcher said the phenomenon tended to, particularly, affect resource-rich developing countries such as Ghana because of limited regulatory capacity and the actions of the multinational companies.

The research is to contribute to a world, where the rules of the game are fair for everyone to allow resource-rich countries like Ghana to derive maximum benefit from natural resources for economic transformation and development.

Ghana is currently, Africa's largest producer of gold, having overtaken South Africa in 2019.

Unfortunately, owing to the prevalence of illicit financial outflows over the years, Ghana has been unable to maximize revenue and export earnings from its gold reserves.

Research by the United Nations Economic Commission for Africa in 2015 estimated that Africa lost about $50 billion through trade mispricing.

She said the analysis of the commodity value chains indicated that the centralized and regulated trade in cocoa beans was more than the decentralized trade in partially refined gold, which was highly exposed to trade mispricing risks.

Some of these risks are transfer pricing risks, arising from international operations of multinational firms, artisanal, small-scale and informal firms, regulatory infrastructure for export valuation and transit trade from neighbouring countries.

The Researcher said fiscal payments attributable to the mining sector amounted to GHC2.36 billion in 2018.

In 2017, gold accounted for 96.4 per cent of total earnings from mineral exports from Ghana.

She recommended an improvement in the data collection capacity of institutions engaged in the export of these commodities such as the Customs Division of the Ghana Revenue Authority.

Dr Ahene-Codjoe said there should also be greater co-operation among the various institutions in these sectors to reconcile data collected and to improve the skills of their staff, improvement in tax assessments and payment tracking.

“They should also provide them with information and communication technology tools, especially computers, relevant software and access to critical databases, matching those of private sector actors,” she added.

She urged regulators to also consider using their research methods as a means for risk-based selection of cases for customs, tax and transfer pricing audits.

Professor Gilles Carbonnier, the Lead Researcher, said invoicing of exports of gold, cocoa and other commodities would be equivalent to more than six per cent of African Gross Domestic Product.

He said the findings provided strong evidence for policy makers to act, curb and reduce IFF and with the current engagement, the research team have moved from the main research into policy discussions.

The Lead Researcher said Switzerland being the main refinery hub for gold, the team had engaged the authorities at the refinery to solicit inputs from them on what needed to be done to curb the menace.

“It only through international corporations that the situation can be improved and curbed,” he added.

Ms Angela Azuma Alu, a Legal Researcher at ISSER, said there was the need for contextual data to better interpret the concept of mispricing in gold in Ghana.

He said the government together with stakeholders needed to streamline and simplify processes of receiving and accounting for gold export revenue.

Prepare for hunger in Ghana — GAWU warn Ghanaians
41 minutes ago