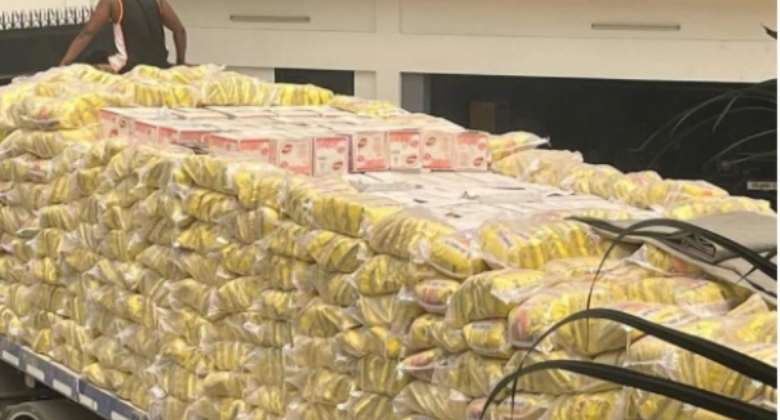 The Chief Executive Officer of Engineers & Planners, Ibrahim Mahama has sent 5,000 bags of rice, 5,000 tins of Mackerel and 1,000 gallons of oil to residents of Appiaste near Bogoso in the Western Region.

The town was ravaged on Thursday, 20 January 2022 by the huge explosion.

The explosion occurred when a truck conveying explosives was involved in an accident with a motorcycle and a third vehicle close to an electronic transformer.

Seventeen people have so far been confirmed dead in the huge explosion.

A statement issued by Information Minister Kojo Oppong Nkrumah, following the tragedy, said: “As of 17:00 hours, a total of seventeen (17) people have, sadly, been confirmed dead, and fifty-nine (59) injured persons had been rescued, bringing to seventy-six (76), the number of persons known, so far, to have been affected by the tragedy”.

“Out of the fifty-nine (59) injured persons, forty-two (42) are receiving treatment and some in critical condition.”

It added: “All hospitals within the vicinity are being used to treat injured persons, and an evacuation plan has been activated to move those in critical condition to medical facilities in Accra so they can get the needed assistance.”

During a visit to some of the victims receiving treatment at the Aseda Health Centre in Bogoso, Vice President Dr Mahamudu Bawumia said the government will foot the medical bills of all the injured.

REVENGE: A lady got pregnant by her sister’s husband who was...
55 minutes ago