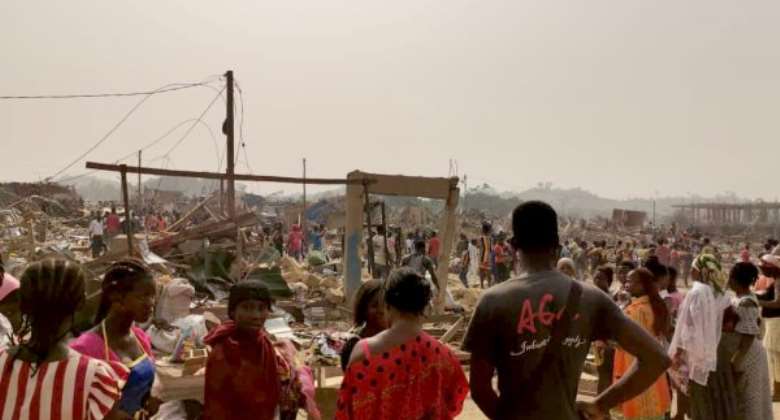 One more person has been confirmed dead from the explosion, which occurred at Appiatse in the Western Region last Thursday.

The deceased (name withheld), a male, died at the Tarkwa Municipal Hospital in the Western Region Friday afternoon, health officials at the Hospital told the Ghana News Agency.

The deceased sustained “severe injury” from the blast and was admitted at the Hospital on Thursday, January 20, 2022.

Mr Asher Chris, a Physician Assistant at the Tarkwa Municipal Hospital, said the Hospital had made arrangements to airlift the victim to the Korle-Bu Teaching Hospital for further treatment but he died ahead of schedule.

“Two of the victims had severe injury so we decided to refer them to a higher facility like Korle-Bu.

“...The one who has died had a bad situation so we had arranged to airlift him to Accra but unfortunately, he died yesterday,” he said.

More than 60 victims, who sustained varying degree of injury from the disaster, were admitted at the Tarkwa Municpal Hospital on Thursday.

As of 1800 Saturday, January 22, 2022, about ten persons had been discharged from the Hospital with others “responding to treatment.”

“Some of the injured had open fracture so we are preparing them to see an orthopaedic surgeon,” Mr Chris said.

At the Apinto Government Hospital in Tarkwa, one out of five injured persons admitted at the facility on Thursday had been discharged Saturday evening.

The patients included a pregnant woman and a four-year-old boy.

The pregnant woman had a metal stuck in her left thigh and successfully underwent surgery on Friday, health officials at the Hospital said.

The four-year old boy sustained “minor cuts” on his face and other parts of his body.

Preliminary investigations by the Police have established that a vehicle transporting mining explosives from Tarkwa to the Chirano Gold Mines collided with a motorcycle resulting in the explosion at Appiatse, a farming community between Bogoso and Bawdie in the Prestea Huni-Valley Municipality in the Western Region.

More than 13 people were killed in the disaster with 179 others injured.

The Government has assured that it would provide temporary houses for the hundreds that have been displaced among other support services.