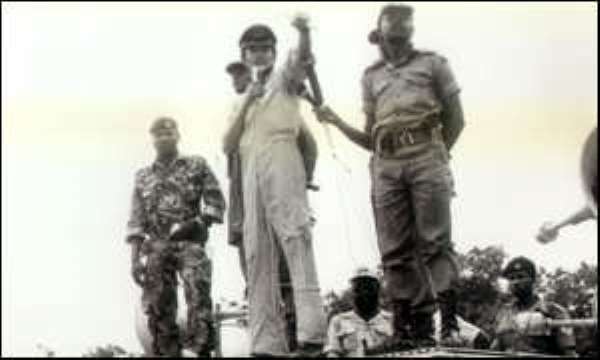 In their despicable attempt to turn historical facts on their head, Osaahene Boakye Djan and Ansah Atiemo together with certain personalities in the media including Kweku Baako continue to abuse our intelligence with a so-called "test" used in executing the Kutus in June 1979. This heartless public onslaught must stop now for the sake of posterity. In fact, it makes me sick to my stomach to see supposedly principled individuals hide behind such a dubiously crafted self-serving "test" to throw dust into the eyes of the public. And I become even sicker when such obviously unprincipled individuals are promoted by the powers-that-be to score cheap political marks. What happened to the lofty ideas and ideals propagated by June 4th for which these two individuals played a pivotal role? THE "TEST"? In simple layman's terms, the center piece of the so-called execution "test" states that the Kutus were executed because they had the nerve to overthrow previously elected gov'ts ie the CPP and PP gov'ts in 1966 and 1972 respectively. What is obvious with this self-serving "test" is the vile contempt individuals like Boakye Djan and Ansah Atiemo have for the intelligence of us. The only conceivable reason they are running away from their own shadows is that they had somebody executed who should not have been executed. And that "somebody" is Afrifa of the the NLC fame. Let's take a look at the list of those executed: 1 Kutu Acheampong

7 Afrifa It is a historical fact that all those executed were in one way or another associated with Acheampong's National Redemption Council or Supreme Military Council 1 or Akuffo's Supreme Military Council 2. The odd man out was Afrifa of the National Liberation Council fame. The poignant question then is; why was he executed while other members of the National Liberation Council were left untouched? In other words, why was the Ocrans, Otus, Harlleys and Ankrahs not executed in light of their execution so-called "test"? And if this test is what they say it is, then, the Kwame Baahs, Agbos and Serlomeys should have been executed as well! After all wasn't it the clarion cry of the AFRC to do justice to all manner of people without fear or favor? And to give vent and meaning to our motto of "freedom and justice"? CAUTIONARY HISTORY. Do the Boakye Djans think that millions of Ghanaians threw their unflinching support behind them because of the AFRC's so-called support for "constitutional" gov't"? Or do they think that a voiceferous section of the population was calling for the blood of their leaders because they overthrew previously elected gov'ts? What buck! To the Boakye Djans, we say that we have not so easily forgotten that at the time of the June 4th Revolution, the late Akuffo's SMC 2 gov't had already set in motion transfer of power to a civilian gov't. Didn't SMC 2 scrapped the Unigov idea and successfully organized elections which was handily won by our late President Hilla Limann and his PNP? The simple point here is that Ghanaians already had that which they supposedly came to power to rectify. The unfortunate and unsavory truth about those executions is that Ghanaians, with the backing of the rank and file of the army, were so enraged by their hopelessly deplorable conditions that they ruthlessly demanded the "blood" of those who for years created and supervised their undeserved humiliation and deprivation. They did not demand the "blood" of the Kutus simply because they overthrew constitutionally elected gov'ts! Haba! Evidently, the Boakye Djans concocted this dubious "test" when they realised that there was practically no way they could connect the late Afrifa to those objective conditions on the ground. How disconcerting! Another profoundly peculiar aspect about this "test" is that it has never been mentioned or mooted by such personalities as General Joshua Amidu, Tsatsu Tsikata, Justices Afreh and Amissah! Individuals who know so much about these executions. Hmmmmmmmmm. DANGEROUSNESS OF "TEST" In the face of this remarkably absurd "test", it is conceivable for some of us to conclude that the late General Afrifa was executed not because of the pivotal role he played in overthrowing my idol, the late Dr. Nkrumah in February 1966! Was it personal revenge or vendetta on the part of some of the members of AFRC? This is the million dollar question that I personally think will continue to agitate and torment the conscience of those who took that momentous decision. If, in fact, we genuinely want closure to the nation's dark secrets, then we should not turn a blind eye to some patently contemptuous lies being propagated by some self-serving individuals like the Boakye Djans and Ansah Atiemos. Isn't it morally and politically obtuse for this gov't to offer these self-serving individuals the platform to distort pure facts? Is it dirty politics as usual? What sort of civic lessons are our leaders teaching the younger generation and posterity by directly or indirectly conniving in this graceless venture? Should our nation allow our political leaders to exact political revenge on their opponents without regarded to the same lofty principles they themselves espouse? We are just craving for the truth and nothing but the truth. We deserve it if we want to build a firm foundation for our society. Long live Ghana! Long live our Democratic Experiment Long live Truth and Justice AND May God bless us all. WILLIAM ANTWI, alias BAFO NEW YORK, USA. Views expressed by the author(s) do not necessarily reflect those of GhanaHomePage.