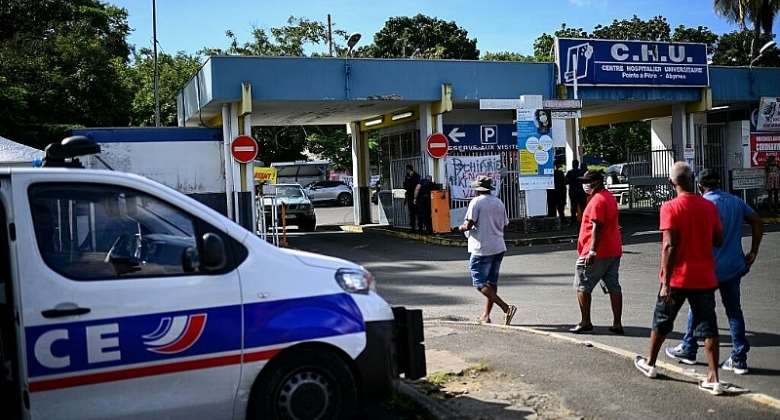 Clashes and arrests were reported as police dismantled the anti-Covid health pass picket line in front of the Pointe-à-Pitre university hospital in Guadeloupe. Both the French overseas territory and its neighbour Martinique have been rocked by often violent protests since November over compulsory vaccination for health workers and other social issues.

"We have implemented a court decision to clear access to the university hospital so that all medical staff and patients can have access and there will be no more episodes of violence such as those we experienced last week," explained the police chief Alexandre Rochatte on RCI Guadeloupe.

Four people were arrested for "violence against the police" and two gendarmes were injured after clashes between demonstrators and authorities following the dismantling of the picket line on Monday morning.

A fire broke out during the first arrest of "someone who tried to force a blockade", the police chief said.

According to Elie Domota, leader of the LKP collective, opposed to compulsory vaccination, the first arrest was of "a comrade who wanted to go to the toilet."

At 3am on Monday morning, "the police arrived at the CHU picket line and crushed everything [...] We understood the manoeuvre, it is the deprivation of rights and freedoms," Maite Hubert M'Toumo, general secretary of the UGTG, a union involved in the collective organisation against compulsory vaccination, told French news agency AFP.

Guadeloupe has been shaken by a social uprising since November which began with the protest against compulsory vaccination for health care workers and has spread to an expression of discontent for living conditions and distrust for central government decisions.

A week ago, Gérard Cotellon, the director of the university hospital in Pointe-à-Pitre, Guadeloupe's main city, and his two deputies had to be escorted by the police from their offices when they came under siege by anti-vaccine protesters.

For Widdy, a hooded protester who faced the police on Monday, "what is happening now is the beginning of confrontations, it is preventing people from going on strike and it is serious. Guadeloupe will explode for sure, it will burn unless the prefect takes the necessary measures to suspend the vaccine pass in Guadeloupe," he said.

In addition, "three roadblocks" were erected early Monday morning in the town of Basse-Terre, a police source said. "A police vehicle was burnt" and officers were subjected to "stone throwing", according to the same source.

A video circulating on social networks shows a motorcyclist crashing heavily in front of a burning roadblock in Rivière des Pères. The fire brigade confirmed that the motorcyclist was "transported in serious condition to the Basse Terre hospital".

Objects were thrown and oil was also spilled on the roads concerned, according to the same police source.

On Saturday, several hundred people took part in a citizens' rally to say "stop" to the violence against the island's hospital staff.

Some health workers came to testify to a climate of "terror" at the CHU and deplored the generalised climate of disinformation around the health crisis.

Meanwhile, in its latest report on the epidemic, the local public health agency (ARS) reported 5,300 new cases of Covid at the weekend, with the Omicron variant representing 95% of them.

New restrictions have come into force such as an earlier curfew from 8pm as of Monday.