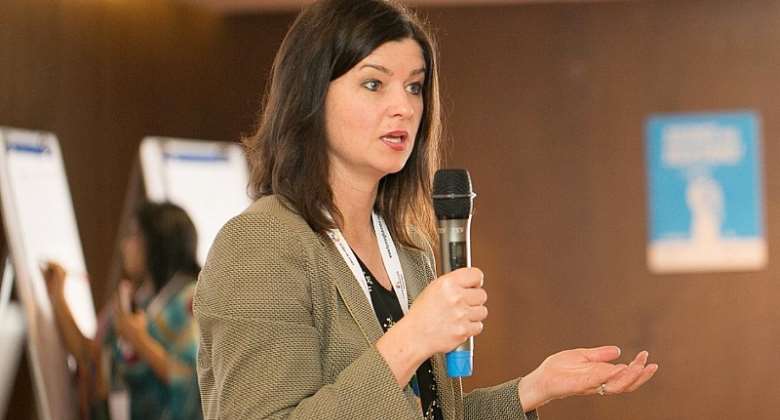 On Jan. 7, Sarah Evanega stepped down as director of the Alliance for Science (a global science communications initiative based at the Boyce Thompson Institute, Cornell University, USA) to assume a new position at Pairwise, a gene editing start-up. In the eight years since she founded the Alliance, Evanega has mobilized and led an international coalition of communicators who advocate for science-based solutions to the key challenges facing the world.

Evanega built a strong foundation for the Alliance, which supports global access to life-improving innovations while actively countering misinformation about agricultural biotechnology, climate change, vaccines, COVID-19 and other issues. Though her absence will be strongly felt, her legacy remains both in the organization she nurtured and the visionary science communication model that she created. I’ve named it the Layperson Model.

How does this model work?
Communicating science is a complex endeavor. For years, one common model directed scientists to speak out about the work they do, with the hope that more information would help the public adopt fact-based attitudes toward scientific innovations and emerging technologies.

Evanega turned this top-down practice on its head by bringing together ordinary people — farmers, journalists, musicians, youth advocates, religious leaders, students, politicians, community organizers — who shared the dream of improving the world, even though they may have lacked formal training in science.

Through both regional training programs and her flagstone Global Leadership Fellows Program, which I joined in 2016, she then empowered these champions with the skills and knowledge to effectively communicate about scientific innovations in their own communities. Once they were trained, Evanega wished them luck and urged them to call her when they met challenges along the way or needed further support. Under this model, the only qualification needed to effectively communicate about science is a passion for addressing challenges like food insecurity, climate change and public health misinformation.

This has proven to be an effective strategy because the Layperson Model puts the messenger at the center of science communication. Research shows that people are more likely to accept or reject scientific innovations based on motivations like the credibility of the messenger, rather than the message itself. This model helps build trust and positively impacts persuasion efforts in the most fundamental way.

With this model, substantive investment is made in equipping local people with the scientific knowledge to carry evidence-based messages into their own circles. This helps ensure that complex science issues are broken down into simple messages that can be easily digested by lay audiences. The Layperson Model also allows for the incorporation of local socio-political contexts and different perspectives in communication messages, improving their likelihood of their acceptance.

Multiple perspectives and varying domains of knowledge, including personal and cultural values, are all crucial in effective communication. This model facilitates that approach by creating more trustworthy channels instead of using outsiders that local communities cannot identify with as messengers.

Growing a global network
The second underlying principle of the Layperson Model is growing a global network to communicate the science. The model encourages collaboration while discouraging ownership of scientific technologies by majority groups, which tends to relegate minority groups to a subservient role as mere recipients of the technology. Currently, the Alliance for Science has more than 13,000 science allies across the world.

Engaging global networks to communicate about science allows for good incorporation of indigenous knowledge in the education and outreach process. As experts in the communication space will argue, personal and community values shape how people assimilate scientific messages. Local communities are less suspicious when information about controversial science topics is shared by their own members, thereby increasing persuasion. This is exactly how the Layperson Model of science communication works.

Localized actions by global networks also make it possible for science champions to properly contextualize the possible benefits of innovation and technology. People hardly pay attention to science, although they encounter and benefit from it everyday. Most of the time, they will attempt to understand it only when they need to make important decisions that relate to their own lives.

Local communicators can also quickly hear about and correct misconceptions and outright disinformation about scientific innovations before the misinformation gets entrenched.

Though the emphasis is on local engagement, the global network serves as a larger support system that regional science champions can turn to when they need help for their own outreach efforts or want to brainstorm ideas. The network can also effectively engage participants in international venues like the United Nations Conference of Parties on Climate Change and the recent United Nations Food Systems Summit.

This summary reflects how I personally have observed Evanega’s Layperson Model of science communication play out in Africa, South Asia and Latin America. She has publicly said that she doesn’t mind if other science groups “steal” the model for their own use. I urge them to do so because I can testify to its effectiveness.