Kofi Boateng: Our Ambulance crises could be more than we think 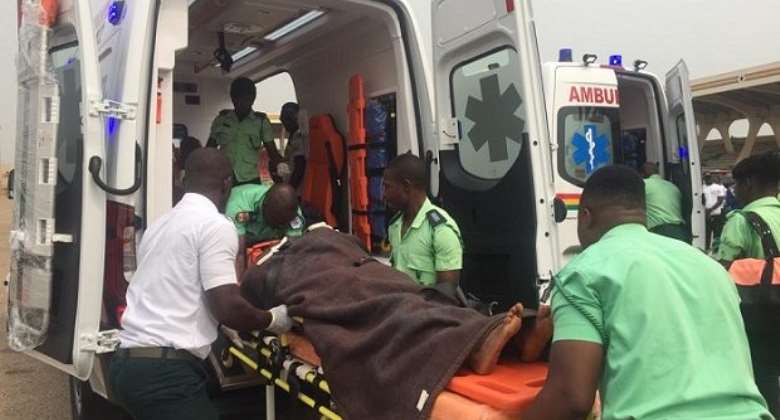 After almost a year of not being home, I spent the new year holiday in my hometown, Bechem, in the Ahafo Region. Like a ritual, I always brace myself for a shudder of some sort anytime I am able to go home. The towns and villages on the stretch of road between Kumasi and Bechem has for more than a decade, to me, seemed like they have been touched by a wand that has decreed them to be forever static, stunted, stagnant and outside the nation Ghana. However, for some reason, I wasn’t expectant of any untoward news or incident this time around.

The next day of my arrival, my cousin, who works as a nurse in a hospital in a small town, Adugyama, the capital of Ahafo Ano South East District in the Ashanti Region, came home too. After the short pleasantries and catching up, the state of our country’s health hijacked our conversation. I was bored by the usual complains about the usual problems concerning our health sector, but my nerves lurched forward after what seemed like a revelation.

Poor folks, who are dominant in that part of our country, had to cough up at least GHS300 if they needed the services of the state ambulance outside their constituency. These were the ambulances which were packed for months and paraded in front of cameras for political capital. This was ludicrous. Unbelievable. I itched to write about it; to probe further. But I thought it would be appropriate to write a news article instead of an op-ed, to drum home the factuality of the issue.

The reason for this payment, I was told, was that the ambulances only worked within the constituency and any trip beyond its boundaries had to be footed by the patient.

From her narration, this is standard practice and it’s not just confined to where she works. As she continued her lamentations and frustrations, I became distraught. Something had to be done. I had to do something. Thinking as a trained journalist, I thought, this is a story that needs and must be told.

However, the first roadblock was to find people who had faced this same ordeal. People won’t talk. Clutching to safety, even at their peril, they think they can’t talk.

I left home on the 3rd, because work resumed on the 4th. The issue lingered in my head but other responsibilities, which ensured my survival, tugged and snatched my time until I read a news article about a woman who lost her life because the ambulance team in Fijai, in the Western Region, had asked for GHS600 to take her from the Holy Child Catholic Hospital to the Korle-Bu Teaching Hospital in Accra.

She died at the Cape Coast Teaching Hospital after the ambulance team had realized in Elmina that her condition had deteriorated and needed urgent attention.

This was after several stoppages on the way to Korle-Bu, and even a return to the Holy Child Catholic Hospital where she was transferred from by the ambulance team. According to the news report, when the ambulance team returned to the Holy Child Catholic Hospital, a disagreement ensued between them and the hospital’s medical team. This resulted in the hospital’s management paying for the fuel because the woman’s husband couldn’t afford such an amount at that particular moment.

This story fits perfectly in the stories my cousin related to me just days ago. I couldn’t resist the urge to add my voice to this injustice. To at least hope that this addition could raise the significance of the story. To make people care. To make us ask questions. To make all of us demand for the accountability of the lost life. It could be you; It could be me.

Any laxity in pushing for the accountability of this incident will make those who are to ensure this doesn’t happen explain away this lost life, which is not just needless but shows the callousness of the people in charge of our ambulance service.

As a matter of fact, this justification of the avoidable was captured in the news story I read. The Regional Administrator of the Ghana Ambulance Service in the Western Region, Frank Bafo, has denied that the death was because of the insistence of his subordinates to demand money to fuel the ambulance.

Laden in his explanation is the unpreparedness of the outfit he heads. How can an emergency service like an ambulance not be fueled because of Christmas holidays and some purported activities which the ambulance undertook?

Even if that is so, why will the ambulance team take off, as if to send the patient to Korle-Bu, only to return back to the transferring hospital, which eventually paid for the fuel? If there was less fuel, couldn’t they have called the hospital than to drive back? Their ability to drive back shows they could have moved forward. In the first place, why didn’t they tell the husband before-hand that he was supposed to pay for the said amount but wait until in the middle of the journey?

The attempt to cover up what actually happened reveals the ineffective and inhumane running of the ambulance service in the region.

However, since I can confirm that this issue is not peculiar to the Western Region but is at least prevalent in some parts of the Ashanti and Ahafo regions, there might be more to the plight of ordinary Ghanaians who cannot shell out such insensitive amounts at such crucial moments.

The obvious question that screams to the front of my mind is that, are we that broke as a country not to be able to fuel ambulances to safeguard our lives?

They shun our public hospitals as if they are infested with the Black Death. If they were in tune with happenings in their respective constituencies, I doubt if this issue would escape them. But are they in touch with the people they purport to represent? Or could it be that they already know this exist? For the executive, I mean the President, he sees it fit to build a cathedral even in this mess. He sees it fit to continuously allocate more money to the office of gov’t machinery to the detriment of sectors that need such resources.

At this point in our so-called democratic experience, we must come to terms that unless we, the ordinary people, demand our due, we want get it. For how long are we going to be quiet because the party we voted for is in power? For how long will only those who seem to be in opposition be the ones who can identify the ills in this society? Do we even need this chaotic, unnecessary and unhealthy division? The questions are manifold and the answers are in our fold. We just have to release them, allow ourselves to see because our plight demands us to open our eyes and use our minds, hands and legs. To not give in or collaborate with those who are bent on being blind to injustice.

Kofi Boateng is a writer and journalist whose task is to excavate the underlying assumptions in our society to help us see. He’s is not always right but he cares about his country. Connect with him… @KofiBoateng_J.