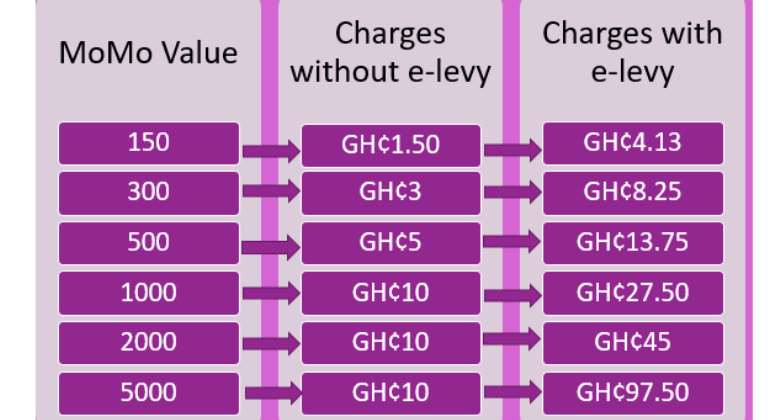 The determination of the government to impose an electronic transactions levy (E-Levy), popularly known as “Momo tax”, provoked the unusual brawls experienced in the Parliament of Ghana. The government and members of the ruling party consider the new levy as a game-changer to the finances of the State. Yet, the opposition contemplates it as an excessive burden on the masses. Some Financial Analysts and Economists have equally expressed mixed opinions about the impact and nature of the levy.

It is believed the levy will help widen the tax net as it covers many people within the population. This view may not be practically accurate due to the exemptions embedded in it. The tax net cannot be broadened with this tax structure. There are clear openings to avoid the payment of the electronic transactions levy, especially users of mobile money platforms. The government may not be able to raise the projected revenue it plans to generate within this financial year. It is very easy to evade the levy: a sender can easily allow cash out at one point for the receiver to take the money at another point. Users of mobile money platforms may device this avenue to avoid paying the levy.

Mostly, indirect taxes are imposed on handles that involve consumption, production, sales (which generate revenue) etc. Taxes imposed on petroleum products or the consumption of communication services are such examples. The nature of the current tax may be excessively burdensome because it applies to any form of transfers, whether they are meant for consumption or production purposes. It is economically unfair for the state to levy people hugely for using mobile money platforms to pay debts either generated by production activities or not. While there cannot be perfect tax systems, the weaknesses of the current model for generating revenue through electronic transactions point to an economically unfair structure that will erode the welfares of the people in their adoption of digital financial innovation products. In supporting the many calls for a review of the policy, I suggest an alternative as discussed:

Upon careful evaluation of the need to widen the tax net of the country to generate more tax revenue, I recommend a transaction-based levy which will be reasonably priced. A 50 pesewas (Fifty Ghana Pesewas) charge should be imposed on all transactions from Fifty Ghana (Ghc50.00) to Ghc200.00, and this should be paid by senders and receivers once the transaction hits the target amount. That is, a mobile money user should essentially pay 50 pesewas per transaction: the number of transactions will determine the amount to pay as tax.

The volume of mobile money transactions per annum in the country are above a billion. A tax system that levies senders and recipients will double the number, increasing the amount to be mobilized. So, if there are eight hundred million (800,000,000) transactions with each valuing more than Ghc1,000.00, the state can generate eight billion (Ghc8 billion) if both senders and recipients pay this amount as charges. Those within the other categories are even excluded. The burden to be incident on the users of mobile money platforms will be reduced drastically using this model.

The arguments about a broadened tax net are sorted as this proposed model does not give exemptions to any category of people except the amount involved in each transaction. Many people will be captured as it involves in and out transactions. The state can willingly levy only senders with the proposed tax structure and still generate enough tax revenue.

The need to mobilise adequate tax revenue to provide infrastructure, employment and other essential services in the country should not exert pressure on the government to adopt fiscal policies that overly burden the masses. Government must not be exceedingly ruthless in its tax policies even if such policies erode the economic wellbeing of the people. The state should evaluate other opinions including the alternative deliberated for a well-adjusted policy.

REVENGE: A lady got pregnant by her sister’s husband who was...
39 minutes ago