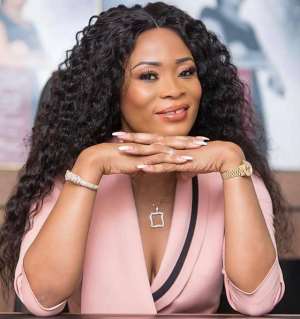 The forum that was attended by the Chief Executive of Ghana Investment Promotion Center, Yofi Grant, was themed 'The Road To A Prosperous Africa'.

The Africa-UAE Trade & Investment Forum which is supported by the Dubai government was aimed at stimulating wider inclusiveness between countries to speed up actualisation of prosperous Africa while also expected to deliver future job creation opportunities for African youths at grassroots levels, following the inevitability of newly forged networks, and the strengthening of existing networks between Africa and the UAE, the spotlight regions of the agenda.

The two-day event ended with an awards night where Madam Gyan Cudjoe, an entrepreneur of global repute, was handed an award for her contribution to the development of Africa through mining and the export of gold.

Passionate focused and moved by the drive to put her country on the world map, the Goldpreneur said she has more to offer her country.

Dr. Mrs. Joana Gyan Cudjoe is a self-accomplished business mogul who has been trading in gold and undisputedly known as the biggest exporter of gold in Ghana and the only woman exporter of Gold in Ghana.

Her Gold Empire in Ghana is licensed by the Minerals Commission of Ghana to Buy & Export Gold globally.

While in the process of building the largest gold refinery in In the world Dr. Mrs. Joana also prides herself in managing a total of over 600 small-scale & large-scale mining concessions across Ghana with an estimated value of about US$120 BN wealth of gold on the ground. Driven by the love to give back to society, not forgetting her humble beginnings.

She has established the Joana Gyan Foundation to specifically meet the needs of the poor, vulnerable, and less privileged in Africa.

Dr. Gyan Cudjoe has a reliable connection to the world of entertainment. She is the CEO and founder of Gem Multimedia Ghana Limited and has, for the first time together with her team of investors, invested in the creative arts industry, particularly music and brand communications.

This investment gave her further impetus to pursue her vision of owning a multimedia company that develops and communicates brands as well as nurturing, managing and promoting talents to play an influential role in Ghana’s creative arts industry while breaking into the entertainment industry in the world at large.

Dr. Mrs. Cudjoe started as a small-scale miner and has gradually worked her way up, competing favourably with the men in a rather male-dominated business.

She is an inspiration to many women in the artisanal small-scale mining sector in Ghana, Africa and strongly believes in linking mining to the shared global commitment to the United Nations Sustainable Development Goals, including Goal 5, which focuses on gender equality and Goal 8, on decent work and economic growth.