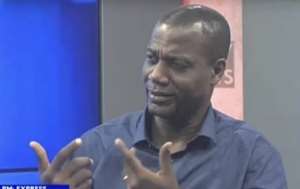 Independent presidential candidate in the 2012 and 2016 general elections, Jacob Osei Yeboah popularly known as JOY, has described yesterday's budget approved by the Majority as "illegal and unparliamentary."

In a short statement on his social media handles, Mr. Osei Yeboah wondere why the Majority cannot “eat the humble pie and negotiate with NDC MPs to agree for common good.”

He stated, “It is pity Joe Wise faulted the Speaker Alban Bagbin in such high dishonesty. Partisanship precludes the gumption but not such a high level.”

The two-time Independent Candidate attempting to explain 104 (1) pointed that “The word At Least half in Maths inequality equation means either Half itself or any number more than half. so at least 2 means 2, 3, 4.....”

Quoting Parliament’s Standing Order 109 (3), he argued that the First Deputy Speaker who sat in as Speaker cannot vote.

“If NDC cannot reject, then the NPP cannot approve. The circumstance is the same 137. They need to agree to approve the budget per the constitution. That is what Ghana needs,” he noted.

Finance Minister announce transactions to be excluded from E...
37 minutes ago