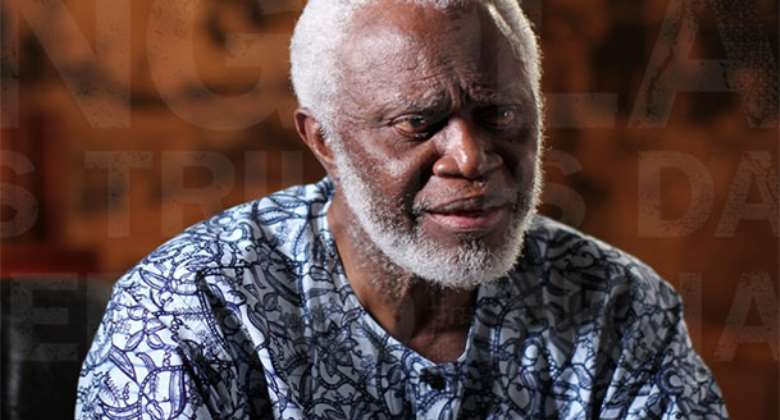 I was angry with God when I heard the death of Retired Captain Kojo Tsikata, the murderer who sent so many people to their untimely death during the revolutionary days. I knew if I became angry with God, the All-knowing, I was being irreverent and may incur His wrath but the anger in my heart could not be controlled. Even though He is called God of mercy, this time around, He was too merciful. Tsikata should have been bed-ridden for one hundred years before he died.

My prayer was for the Lord Almighty to let Tsikata to live so long to see the success of the children of those he murdered before he died. In fact, I wanted God to let Tsikata live so long that he himself will beg God to kill him but God will not so that he will know that killing human being is a sin abhorred by God. God did not listen to my prayer and killed the murderer so early in his life. I am however, consoled because I still believe the sins of the father shall visit his children even though the Bible has a contrary view.

It was an open secret that when Kojo Tsikata was the National Security Adviser to the late Rawlings' junta, he supervised the murder of countless number of dissidents and coup plotters. During the hearing of the National Reconciliation Commission, it came out that Tsikata was the mastermind of many death of many citizens accused of being against the wish-to-be-for gotten Rawlings revolutions. It was revealed that as many as thirty Coup de etats were staged against the junta and those arrested never saw the light of the day because Tsikata made sure they were executed without trial. The lucky ones who broke jail and run into exile never returned until ex-president Kufuor set up the NRC and gave them amnesty to return home.

When the three High Court Judges and the Army Major were gruesomely murdered at Bundase and burnt with petrol, the blame was put on the door steps of murderous Kojo Tsikata. He refused to appear before the NRC until he was literally dragged by law to appear. All the answers he gave at the NRC concerning the murder of the High Court Judges and the retired Major were laughable but at the end of the day benevolent President Kufuor admonished Ghanaians to forgive and move forward as a nation. Tsikata died with that albatross still hanging on his neck. It was Kwasi Pratt who published in the defunct The Voice newspaper that more than two hundred and sixty six Ghanaians got missing when Tsikata was the National Security Adviser. Can Kwasi Pratt deny this? In fact, he even published the names and the towns these missing Ghanaians came from.

All along I was expecting a crazy bereaved family member of those killed by Tsikata to take action but it never happened because Ghanaians are not made of that stuff. The man lived, ate, drunk and enjoyed life till he died. That is my pain. I wanted him to taste his own medicine. I pity his children because long as they live, no matter how good they are, their names will be associated with their father whose hands were tainted with the blood of innocent Ghanaians.

Cadres and old soldiers of the revolution who are undoubtedly useless, hopeless and unemployable may be licking their wounds. They too foolishly followed this criminal and his cohorts to commit murder in the name of the revolution and are now living in abject poverty. The first time I saw the mansion of Kojo Tiskata and compared it to that of Sergeant Akwasi Amoah, a popular and powerful ex-Sergeant during the revolutionary days, who lives in my holy village I nearly wept. People like Amoah were those who did the hatchet job but today, they are living from hand to mouth. In fact, they can't make ends meet and to add insult to injury, they have become a laughing stock in the community. Ex-Sergeant Amoah is now too old to farm and so he could make do with a few plants of cassava which he cultivates at his backyard to cook 'bankye ampesie'. Anytime I visited home and gave him two hundred Cedis when leaving for my station, he will jubilate as if I had given him two million Cedis. He has taken solace in heavy drinking of Akpetashie. Life is not treating him well at all. He is paying the price of murdering innocent souls.

One day when I went back home for a funeral and visited his thatched roofed single bedroom, he sat me down and recounted how they killed some arrested dissident soldiers under the instruction of Kojo Tsikata. He said after mowing them down, they were asked to bury them in a mass grave. The sad story he told me was that he was summarily dismissed from the army when Kojo Tsikata learnt that he discussed the murder of the dissident soldiers with another soldier who also started spreading the story. He said apart from a few personal belongings he packed from his quarters, he returned to the village without a pesewa. He continuous to curse the day he enlisted in the Ghana Armed Forces and wished the ghosts of those killed by Kojo Tsikata will haunt him even in his grave. We used to call him Officer anytime he visited the village with his AK 47 hanging on his hefty shoulders. Today, he is so old and weak that he cannot handle even a Christmas toy pistol.

Lessons to be learnt from the death of Kojo Tsikata is that everyone will die one day. Whatever we do we should keep in mind that after our death the living will discuss our live on earth. I will be happy to read whatever obituary that will be written during the funeral of Kojo Tsikata. The man will have nothing good to be written about him apart from those to be written by his wife, children and family members and of course the NDC, the beneficiaries of the murderous revolution. How do I glory a man who was condemned to death by the late General Acheampong for plotting a Coup but instead rejoiced when the Acheampong who spared his life was tied to the stakes an shot like a common criminal?

Those who took part in the revolution and shed the blood of innocent Ghanaians should by now see their Pastors and Imams to seek for prayers of forgiveness. Their hands are dripping with blood and like Cain, they will not see peace till they die. Some of them are not to blame because they acted under the command of their superior officers. Others took the law into their own hands and acted according to their whims and caprices. Such persons need deliverance.

Are you aware many revolutionaries who killed and maimed their fellow Ghanaians have gone mad? Go to Ashaiman and see. Corporal Owusu Johnson who used to be on guard duties at the Ghana Broadcasting Co-operation during the revolutionary days and killed counter revolutionary soldiers. He drinks dirty water from the gutters and begs for food at chop bars. He has no wife nor children because he spent his youthful years revolutionizing. That is how God punishes wrong doers. I have ordered a white cow from Bolgatanga for a purpose. On the day the funeral of Captain Kojo Tsikata will be organized, I will kill the cow and enjoy with my friends and neighbors. It will be the happiest day in my life. God don punish him for us!

I am bitter today because one of my best friends who was a Corporal in the Ghana Army called Stephen Ansah was arrested among other officers and marched before Kojo Tsikata charged with plotting a coup. Apart from two of them who were discharged, Tsikata asked the officers who arrested them to 'take them away' which meant they should be executed and they were summarily executed without trial. I still have his picture hanging on my wall. And you want me to be sad because Tsikata is dead? La!!!

The fact that I am angry today doesn't mean I should abandon my cigar smoking habit. So here I go with Havana Slim., the favorite of Cuban factory workers because of its low cost.