Even with the paltry GHS400 monthly, they owe us four months — Security men threaten to lock-up Kejetia market 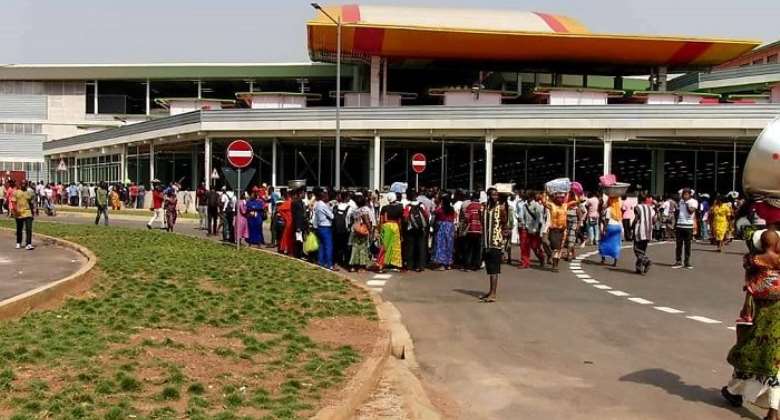 Security personnel at the Kumasi City Market (Kejetia market) have threatened to lock up the whole facility on December 2, 2021 if their four month salary arrears are not paid by then.

They claim they have been maltreated for far too long and their silence is being mistaken to be their weaknesses.

The security personnel, some of whom claim to be former members of pro-NPP’s Delta Force say they were recruited to the market as compensation for the roles they played as members of the ruling party’s vigilante group.

However, they have been livid over certain occurrences, which they suspect is being deliberately meted to them.

They vowed to wash their dirty linen in public.

A spokesperson for the aggrieved Kejetia security personnel, Isaac Owusu, said the company that hired them, LESBENA security has refused to pay them their salaries arrears.

“We risked our lives and came to work even in the covid-19 period when Chairman Wontumi, Nana Addo, Nana Otumfuo were sharing rice and other food items, none of them could even say they were coming to give us some. But they begged us to keep watch here and ensure no one steals from the market wares.

“They promised us that they would increase our pay for watching over the market during the covid lockdown but didn’t do it, and now even the little one that is due us is not being paid,” he said.

Mr Owusu said they were promised better jobs after risking their lives to protect ballot boxes for then candidate Akufo Addo in 2016, only for Chairman Wontumi to get them employed in a work that pays little over GH400.

“Some of our colleagues don’t even have lorry fares to come to work and have resorted to taking loans from neighbor to the extent of becoming a societal burden, But Chairman Wontumi has never passed here to even ask of our well being,” he noted angrily.

He alleged that the security company they work for which has not been able to pay them for the past four months belongs to Wontumi’s sister, hence they expect him to speak on their behalf.

ModernGhana News searches have shown that the inability of the LESBENA Security to pay monies owed them is a result of the refusal of traders of the facility to pay their bills.

The traders swore about seven months ago they will not pay any bill at the market until they are provided with personal ECG meters.

It is understood that part of the traders' bills management collected was used to pay for fumigation, garbage collection, cleaning, security and electricity.