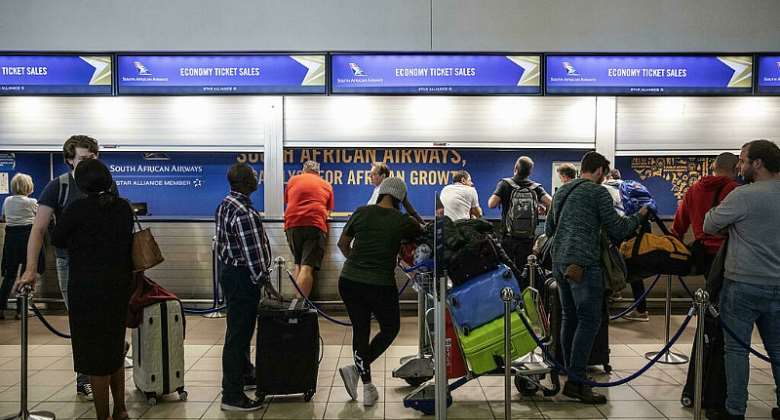 South Africa's government has responded angrily to Britain and other countries imposing travel restrictions after the outbreak of a new virus detected by SA scientists earlier this week which the World Health Organization has classified as highly transmissble and of concern.

A spokesman for the foreign Minister Naledi Pandor described the UK's decision to ban flights from South Africa, Botswana, Eswatini, Lesotho, Namibia and Zimbabwe as rushed, and said Britain would be asked to reconsider its decision.

The statement added that even the World Health Organization has not decided how to handle the B1.1.529 variant which has been detected in South Africa and a number of its neighbours.

Initially known as the Botswana variant, a WHO panel named it "omicron" on Friday and classified it as a highly transmissible virus of concern, the same category that includes the predominant delta variant.

The WHO has warned against overreaction, saying it needed more time to thoroughly study the variant.

But several other countries – including the US, Australia, Canada and Russia – have also announced they are suspending travel to southern Africa.

On Friday the European Union agreed to activate the so called "emergency break" and halt travel from seven southern African nations.

The strain has been detected in all corners of South Africa according to Health Minister Joe Phaahla. But he also described the travel bans as "knee-jerk and draconian" in Friday's press conference and insisted his country had acted transparently by alerting the WHO to the variant.

The variant has 50 mutations, 30 of which are on the protein spike that is targeted by vaccines.

Scientists are trying to establish whether omicron, like the delta variant, spreads more easily.

Leaders, including President Cyril Ramaphosa, are urging South Africans to get vaccinated.

The country has no shortage of medication and it is available free of charge.

Nevertheless only 24 percent of the population is fully vaccinated and 41 percent has had a first dose.

Phaahla fears the omicron variant is contributing to what he calls an “exponential” increase in the number of Covid cases in South Africa.

Friday's figure was 2,500 – double the number of infections from the previous day.

He fears this could be start of the fourth wave of Covid in South Africa.

Ramaphosa is expected to address the nation on Sunday night in what has euphemistically become known as a family meeting.

It not clear whether he will reimpose stricter restrictions against Covid but representatives of the liquor industry are pleading with him not to limit the sale of alcohol which has been a popular method of keeping people indoors.