When a leader loses credibility 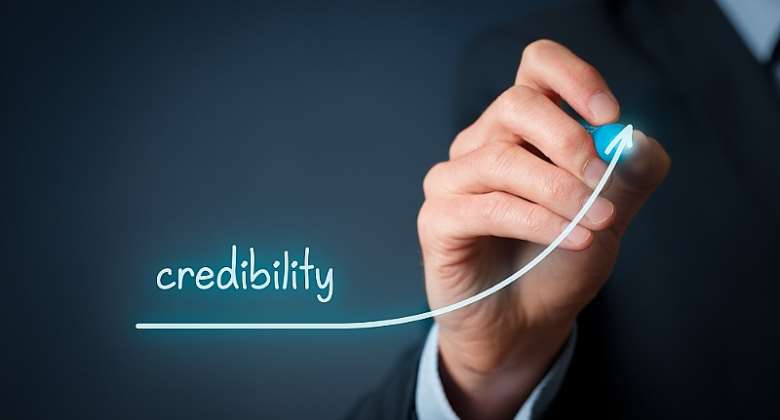 Years ago, I met an old man who admonished me on the need to be disciplined in every environment I find myself. Though I was 7years it looks like yesterday, I still remember the facts of the admonition. The same thing he advised is still causing havoc in every sector of the economy. It is alleged that some Heads of some Senior High Schools copy answers for their children during the West African Senior School Certificate Examination otherwise known as the WASSCE. I can’t do this without mentioning the activities of some corrupt General Managers who allegedly sleep with female secretaries and accountants to drain the coffers of private and public companies. This has led to the inability of the said companies to break even talk less of paying salaries of workers. These managers are very technical and diabolic because they are the humble in the company. When they meet the Chief Executive Officers of their respective companies, the phrase “Sir, I’m not aware” is often used to blamed their subordinates for insubordinations whereas they are the cause of the company’s woes. God have mercy. Truth is, the CEOs don’t have the luxury in the world to enquire the state of affairs from other workers simply because they trust the corrupt, incompetent and wicked General Manager than all workers put together. Meanwhile, these General Managers go about denting the image of the CEOs saying they are reasons behind the delay in salary payment. Yet smiles with the same CEO anytime there is general meeting. What an evil world?

This article of mine isn’t backed by any desire whatsoever to bring rancour among CEOs and their General Managers or Leaders and the citizens. However, I must write in anticipation to open the eyes of all and sundry to the most valuable yet brittle virtue, credibility.

In the first place, I would like to make it explicit that as a nation, we have lost the fight of instilling this virtue at the very moment we called bribes as gifts. It is rather unfortunate when some officials are caught in corrupt allegations and scandals the only way to defend themselves is to indicate on national television that the cash was presented to them as gift. If we could humbly tax gifts, it could go a long way to assist the nation tremendously. Besides, many of these gifts are in Dollars and Cedis. One thing continues to bother me; the rationale behind not “disclosing their assets” the amount involved in the supposed gift until captured. Anyway, a gift is a gift regardless who gives or receives.

Another point worth mentioning is the fact that, credibility accords a leader the respect he desires. Some even say respect is earned because anyone who isn’t honest can’t be trusted and it’s by far a clear indication of losing his credibility in the short and long terms. Is it really the case? Ghana’s political terrain has seen lots of failed campaign promises. With some leaders indicating that Ghanaians have short memories. Others also indicate to the electorates to test their level of competence. I won’t be your usual political writer who only does the biddings of his paymaster. When a society continues to produce NPP and NDC writers, the ordinary Ghanaian who is faced with problems can’t be given any hope. Corruption continues to wreak havoc in every sector of the economy but we haven’t been able to make it bitter. So long as your party is in power, you will have a field day to enjoy money born out of corruption. No wonder the phrase “who watches the watchman” has been prevalent lately.

It is worthy of note that, the youths of this country lost confidence in Former President John Dramani Mahama hence giving President Nana Addo Danquah Akufo Addo the opportunity to justify his inclusion. However, it will interest you to know that President Nana Addo has also failed the youths. You can judge using your political lenses but that wouldn’t cover the truth. Unemployment continues to be a big issue in the country. Has your district yet benefited from the One district, One factory policy? In the 2016 manifesto, the NPP says it intends to “redefine basic education to include Senior High School (SHS), covering vocational, agricultural and technical schools, and make it available for free on a universal basis to all Ghanaians”. Akufo Addo kept this promise nine months after his inauguration in January 2017. Indeed, he deserves accolades for keeping to this promise. Let me also be quick to hint that Akosua’s district can’t boast of One District, One Factory. Your Excellency, when should Akosua expect it?

To further buttress my stance on credibility and leadership, I would humbly want to say this today. Our leaders are the cause of Ghana’s woes. Maybe you benefit when party A or B is in power so obviously you see things differently. Nonetheless, truth will always triumph over falsehood. Remember, there are higher currencies than money and credibility is one of them. Even your President won’t tell you this because when you’re credible, your name alone can change a life of someone living in penury. The power of credibility I call it.

Any leader who lacks credibility isn’t honest, trustworthy and above all honourable. When you desire respect from your citizens, attend the school of credibility to broaden your horizon. I believe this piece of mine will go a long way to change the narrative in the Ghanaian political system.

Residents of Settlement unhappy over destruction of road in ...
33 minutes ago