Ghana must protect seeds from corporate capture to ensure the right to food, nutrition 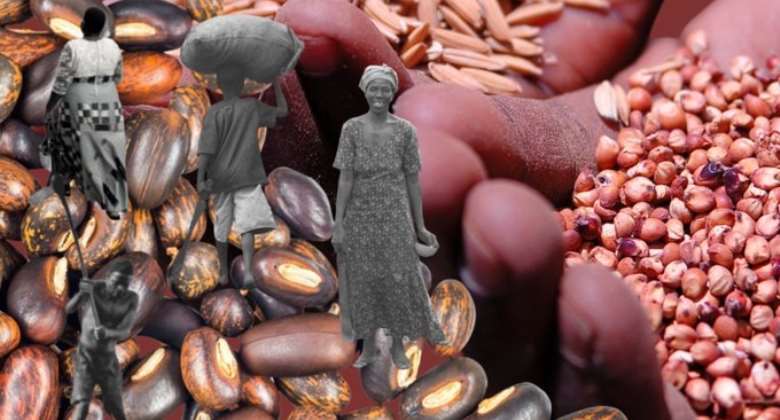 FIAN International has thrown its support behind calls to repeal a law in Ghana that peasants fear would criminalize them for saving, using, exchanging, modifying, and selling their own seeds and lead to the expansion of corporate control over Ghanian agriculture and food systems.

“It is utmost urgent that the Ghana government promote and protect the seeds of its farmers to ensure the people’s right to food and nutrition in general and the farmers’ seed sovereignty in particular,” said Valentin Hategekimana, coordinator for Africa at FIAN International.

The law, enacted last year, was hailed by Ghana’s 7th Parliament as a landmark achievement of the administration of President Nana Akufo-Addo to promote the development of new improved varieties of staple crops and other plant varieties.

However, in its 23-page lawsuit, FSG said the court should set aside and declare Act 1050 as unconstitutional and thus null and void because its implementation hinges on the International Convention for the Protection of New Varieties of Plants (UPOV) to which the State of Ghana wasn’t yet a party when the law took effect.

The law was passed by Parliament on November 4, 2020 and approved by President Akufo-Addo on December 29, 2020.

On its website, the International Union for the Protection of New Varieties of Plants listed Ghana as among its members only on Nov. 3, 2021 or about a year after Act 1050’s passage. The union also indicated on its website that Ghana would only be bound by the 1991 Act of the UPOV Convention starting on Dec. 3, 2021.

Hategekimana said the mention of Ghana as party to UPOV in Article 61 of Act 1050 at the time when the state had not yet acceded to the convention “raises a question of criminal responsibility of those who enacted the law.”

Among the objectives of the Convention, which was adopted in Paris in 1961, is to protect new varieties of plants through intellectual property rights.

Peasant-based groups and movements across the globe have been criticizing and opposing UPOV for providing patent-like rights over crop varieties that have led to the privatization and control of seeds by large multinational corporations and the criminalization of farmers exercising their rights to seed.

In its lawsuit, FSG argued that Act 1050 violates farmers' right to practice their traditional knowledge in using their own seeds and benefit from their customary agricultural practices.

FIAN International said the law would pave the way for the protection and promotion of commercial seeds and would make Ghana depend on these seeds that need poison-laden pesticides and chemical fertilizers, which are harmful to humans, biodiversity, and the environment.

“Commercial seeds are expensive and have to be bought every season and will thus increase dependence on the seed industry,” said Hategekimana. “Furthermore, there is a risk of biopiracy of Ghana farmers’ seeds as these could be imitated by any plant breeder, who can seek protection of what could become his or her own variety."

Hategekimana pointed out that this situation could criminally punish farmers exercising their rights to their seeds that have been patented by other entities. Act 1050 imposes a jail term of up to 15 years and financial penalties on a person who may sell or market the propagating material of a variety protected in Ghana.

“Rather than advancing the agriculture sector, Act 1050 will be a source of human rights violations in Ghana,” concluded Hategekimana.