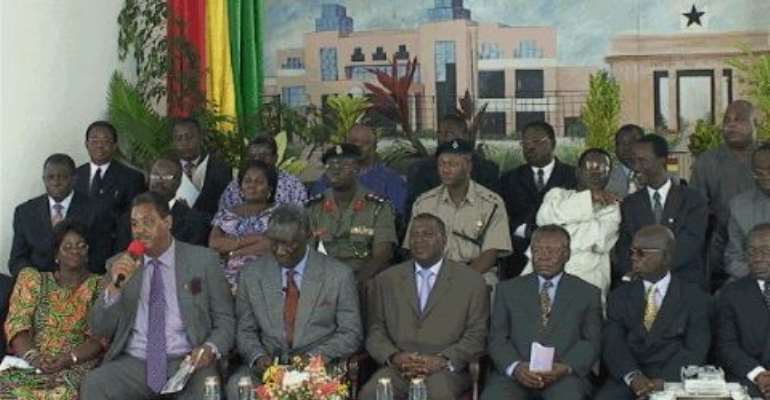 Delivering on promises and continuity have always been the hallmarks of successful governance, and true to his declaration in October last year, Wofa Jak has made good on his lessons learnt in Malaysia in the science of cabinet building. At the time, Wofa's erudition had been greatly advanced by his sojourns in Malaysia when he observed that there could be as many as twenty-one ministers in the office of the prime minister alone. In addtion he had been astounded by some of the ingenious ministries and was toying with the idea of having a whole ministry for Ghana Airways, or railways and such.

Well now the grand plan seems to be unfolding in his latest cabinet reshuffle. I am not overly interested in the chess game part of it where personalities were moved or stayed put. My major interests lie in some of the curious new ministries that were created. They speak a lot of the Wofa Jak agenda.

The most interesting position and personality I find are the new ministry and Minister Of Trade, Industry & Special Presidential Initiatives, Alan Kyeremateng, the former ambassador to the United States. The Ambassador has achieved quite the reputation for his tireless efforts at seeking the often elusive 'foreign investor', and also for promotion of Ghanaian goods in the US markets. During this time, he was wont to talk about the 'big idea', and the examples of Japan and Korea. However, as ambassador, even though he may have helped in some industrial policies, he was more the agent of Government policy and not the initiator. If the government intended to sell cashew nuts, yams, bottled 'pito' and then 'joromize', 'batikize' and 'adukudonize' the world, it was the ambassador's job to promote just that in the US market. In addition he had to look for investors to come and help Ghanaians do just that.

But as Minister of Industry, the good Chief has a chance to initiate industrial policy, to put that 'big idea' across to the government and people of Ghana. Will the Ambassador serve Ghanaians with a bold industrialization policy or are we forever stuck with the gradualist approach of tiresome Special Initiatives that have of late embraced the bottling of 'pito' as the latest victim.

There are times in the affairs of men where individuals are thrust on to center stage by a fortuitous combination of circumstances. But then it falls to such individuals, if they are able, to seize the opportunity to raise the bar on progress with bold initiatives that profoundly alter for good, our conceptions of reality. The good Chief is on such a stage. Already there is whisperings of his being groomed as the 2008 Presidential candidate, which by the way we intend to contest too. A greater opportunity never did arise.

Poor Jake the Snake! It is not clear whether his appointment as Minister of Tourism and Modernization of the Capital City is a demotion or promotion. What is clear is that his is a daunting task. Modernizing Accra? Now that is an uphill battle. I believe this is Wofa Jak's personal revenge against Jake the Rake. You know, for that 'Asante bastards' comment Jake the Snake made to Kofi Wayo. You see Wofa Jak never forgets. Especially when the genesis of his virility, his Asanteness, is questioned with such disreputable disdain. The man has patiently been in opposition since he was 28 years old. He has a history of waiting till the time is right.

But Jake needn't worry too much. Wofa Jak and his cohort of international beggars would do a lot of his job as Minister of Modernizing Accra. If the Tetteh Quarshie Circle needs to be rehabilitated, Jake can trust Wofa Jak to go and beg the Japanese or some other 'nese' for money. If the Circle – Achimota road needs to be widened, Wofa Jak would don his Armani suit and go beg some other country for it. If the National Arts center needs renovation, Wofa Jak would go beg the Chinese for it.

Besides, modernizing Accra has never been too difficult any way. The formula is always the same. Get some Salifu Amankwas to terrorize the population on some barren turf strewn with a few flowers, that sits next to open sewers decorated with human excrement; or paint every kiosk or bar blue and white; or white wash all the public latrines till the dried excreta is just showing through the white paint. Come to think of it, the whole of Sodom and Gomorrah, that doomed slum in Accra, could be painted blue and white as a sign of modernization. And hopefully, they would not forget my poor old neighborhood Sahara on the Odawna. All we ask for is a whitewashed public pit latrine. We have been doing it in the gutter for too long.

This would leave Jake to concentrate on more important matters like putting a Mormon Church – or rather palace – on every street corner in Accra. The Mormons will work well in Ghana. We both share the polygamy thing, so all in all, Jake and every one else can have a good time.

Apraku, the former Minister of Industry is another who demands our sympathy. For this inept bloke who imagines that industrialization is merely a concept of importing machinery to boil and squeeze our agricultural produce, his new post as Minister of Nepad, might be intended by Wofa Jak to teach him the virtues of humility. Wofa Jak may have reasoned thus: Nepad is the big 'kneepads' that African leaders have to wear when they travel the globe begging for loans in exchange for a promise of good governance. What better way to initiate a young hot blooded minister than to immerse him in the noble task of ethereal begging.

People think Alan Kyremateng is being groomed as Wofa Jak's successor? I think not. Me thinks Apraku is the most likely successor. Why else would Wofa Jak put him right in the middle of the begging roads of Nepad?

As for the new portfolio, or 'portlofio' as Kutu would say, of 'Ports Harbors and Railways, it begs the imagination for words. The mere fact that our ports and railways are specifically designed for our dependent economy that exports lots of primary products without added value should point to the direction of Wofa Jak's programs. There is no question about Ghana's commitiment to this mode of production by this new 'portlofio'. The work started by Governor Guggisberg and continued by Edgar Kaiser is now nearing closure. The harbors and railways that they planned and built to export our commodities now have a whole minister thanks to Wofa Jak's 'Golden Age of Business'.

I have reserved comments on Jurrasic Joseph Henry and his new portfolio of 'Institutional Renewal or Whatever'. I think I am too young to fathom what is expected to be renewed by Ghana's leading political fossil. But I am quite confident that between him and the other dinosaurs like Esseku and Allah Allah Adjetey, they know what institutional renewal means. Maybe a chance for them to take some Botox and get 'jiggy' with it'. We will see in time what exactly 'institutional renewal' means.

Finally my condolences go to the cackle of ministerial Special Advisors, those servants of patronage who know not how this cabinet reshuffle will affect their sweet paychecks. My heart goes out especially to my mother's sister's son Ferdinand Ayim who is being fought over by Jake the Snake and the new Minister of Information, Nana Akomeah. They never knew what hit them by Wofa Jak's reshuffle, and like the Ministers who were reshuffled, they are going to lose a lot of sleep over what is in store for them.

A lot of fufu will remain uneaten. Kenkey shall go cold. Tuozafi will rot. Akple shall sit untouched as a result of Wofa Jak's actions, but all we can say to them, like they do at funerals to the bereaved is 'hye din' (hold fast'), for like the Almighty Lord, Wofa Jak giveth and Wofa Jak taketh.

Akufo-Addo is confused over MMDCEs appointment – Ho Central ...
10 minutes ago

I denounce any disturbance in Odododiodio in my name – Mayor...
45 minutes ago