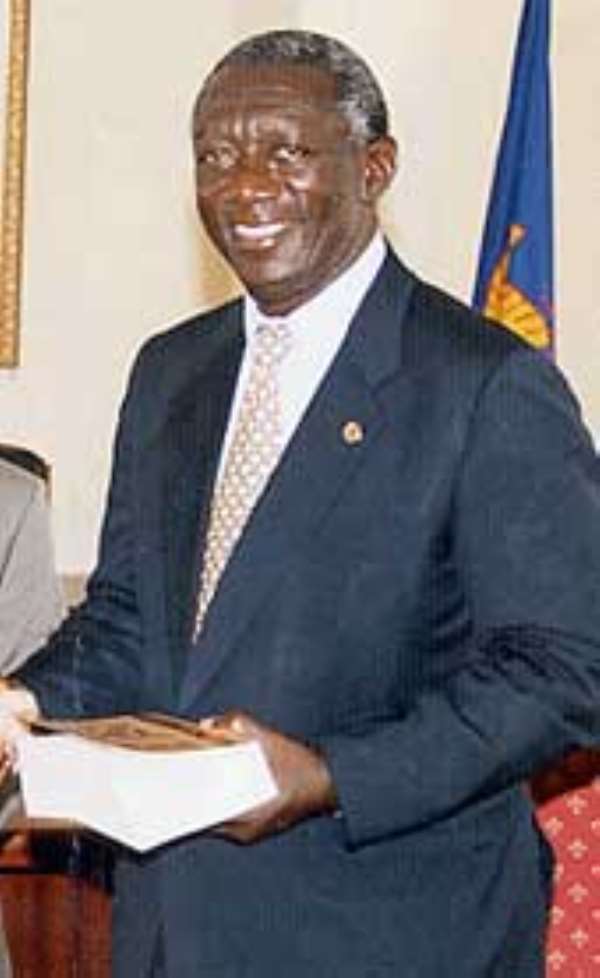 Sometimes we are able to stand common sense on its head, make a perfect circle around it, and dance vigorous Agbadza, in the vain hope that some wisdom will rub off on us. Or at least, onlookers will believe we are engaged in a frenzied search for enlightenment.

Such is the nature of our conventional wisdom; that 'blood has been shed, and our fathers have toiled' to build this dear country of ours. This belief has been eulogized in songs, anthems and pledges. Wofa Jak himself, invokes the great Ephraim Amu's song, 'Yen ara y'asase ni' to open his 'State of the Union' address, citing the first lines, "This is our land, land of a priceless heritage, won for us by our forefathers with their blood, sweat and toil. It is now our turn to do our bit for it..."

Even the hero of Swedru Business School, Kutu, enforced a national pledge that reminded us to 'hold in high esteem our heritage won for us through the blood and toil of our fathers.

It is a sentiment that, if true, could become an effective rallying point for a vibrant national consciousness. But such a consciousness is no empty or conjured sentiment. It is founded upon genuine historic acts of sacrifice, struggle and hard work that have enshrined shared values of progress into the national ethos. Great nations like America can point to the pioneering spirit, slavery, the War of Independence, civil war and the two World Wars as epochal events in which blood was shed, and man and woman toiled and suffered so that a great nation could be forged.

The question of 'blood shed and toil of our fathers' is not as clear-cut in Ghana as it is in the case of America. Whose blood has been shed, and who has toiled to build Ghana so that we may be able to steel our consciousness in their sacrifices, and forge ahead to build a just and prosperous society for our peoples? Many who attempt to answer this question are quick to mention Sergeant Adjetey and the ex - service men who were murdered on the orders of an over-zealous colonial police officer. Dr Danquah and Obetsebi Lamptey, who died in the jails of the goldsmith's son also seem to feature prominently on our 'blood' list. A few people might be tempted to add some victims of the Junior Jesus or Afrifa eras, but we must carefully differentiate between blood shed FOR Ghana and blood shed BECAUSE of Ghana. The former provides the values of national consciousness referred to above, and the latter is its very antithesis. Blood, shed 'because' of Ghana is a resu! lt of the failure of the state to guarantee its citizens the means for their safety and prosperity.

The blood that has been shed 'because' of Ghana makes the blood shed 'for' Ghana totally irrelevant. In the 46 years of Ghana's existence as a sovereign state, more blood has been shed as a result of poverty, the lack of adequate health care and illnesses related to poverty than any blood shed 'for' Ghana. More blood has been shed by an oppressive state that has at times murdered and tortured its citizens under dubious pretexts, than has been shed for the welfare of the country. The tales of torture coming out of the National Reconciliation Committee point to state officials presiding over the suffering of many people, not to suffering for the good of Ghana. And prior to our existence as one country, the blood that was shed was mainly through the wars we fought against each other in order to sell each other to the merchant ships!

As to the 'toil of our fathers', its meaning is rather obscure for our country. In the 46 years of our existence, per capita income has not grown, we have become a Least Developed Country, almost entirely dependent on the charity of other countries for our development budget, and majority of the population is classified as poor. More than a tenth of the population has abandoned the country in search of better opportunities, and to fall ill is but to tempt the fates. So where then is the 'toil of our fathers' that we like to celebrate? Could it be the toil of our cocoa farmers, miners and other workers whose labor is exploited by the State, and whose products underpin the economic dependency of our country? Surely they do not 'toil' for Ghana in the right sense of the expression.

Lacking true 'blood' shed for the country, and any significant beneficial 'toil', we are forced to assume a state of posturing to whip up, as it were, a semblance of national consciousness. But posturing is a complex cover-up, an assumption of self-importance, a delusion of grandeur whilst acknowledging a deep sense of ineptitude and inadequacy. Such posturing produces contradictory situations that often times beg comprehension.

For example, Nkrumah wrote a treatise on neo-colonialism that revealed a web of multinationals that controlled the economy of Africa. He even coined the term 'neo-colonialism'. Yet he presided over a neo-colony and strengthened its structural dependency on a few crops and minerals exported with very little value added. One wonders, if he knew the workings of neo-colonialism so well, why was not a foundation set for national self-sufficiency?

And so it is that Wofa Jak presents a State of the Union address to tell us that 70% of government revenue goes into paying salaries of workers, majority of whom, we know, are not involved in directly productive activity , and that 80% of Ghana's development budget, including those poor excuses for schools ands clinics in the rural areas, is funded from the generosity, charity and loans from other countries. And as if these revelations are not daunting enough, he unleashes a vision that will solve the problem of sports by going to the Chinese for funds to build stadia, that will beg Mauritius to build a factory to process cotton, that goes to Japan for funds to build a fly- over or .two, and to improve the same neo-colonial road system, a national ICT center of excellence from the Indian government, and a vision of education that promotes yet another colonial language, French.

Not that anybody in his right mind expects that Wofa Jack and his team would turn Ghana into a paradise in two years, but would it be too much to expect a party that boasts of being in opposition for 30 years to be actually implementing a plan for economic self-sufficiency instead of an ad hoc approach aimed at mitigating the ill-effects of an entrenched dependency.

If all that Wofa Jak wants is to continue this dependency - and the government's hands are tied by the IMF and World Bank conditionalities - why then is he asking for more sacrifices from the people? Are we supposed to applaud this exhibition and admission of ineptitude? Are we supposed to wait patiently with Wofa Jak for the benevolence of the Chinese, the Finns, The Americans, The British, the Dutch and all the others before we begin to reap the fruits of our fathers' blood and toil?

Wofa Jak could not have put his position any better in his invocation of Ephraim Amu's song. His peculiar English translation of the first lines is charged with meaning.

"This is our land, land of a priceless heritage, won for us by our forefathers with their blood, sweat and toil. It is now our turn to do our BIT for it..."

The key word here is 'bit', and that is precisely what Wofa Jak is doing. Asking people to shed blood and toil so he can add his 'bit' to our continued socio-economic dependency.

The drums are beating hard in the afternoon sun. The people are in a circle, hips gyrating, hands working like pistons and breasts heaving in frenzied response to the Agbadza beat. In the middle of the circle, common sense stands on its head, wilting from the fierceness of the unrelenting midday sun. Let us hope that more than a 'bit' of enlightenment shall rub off on us.