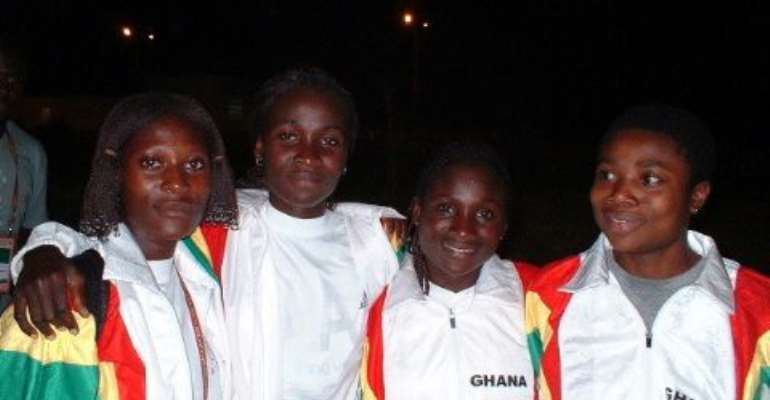 Ghana netted its second medal, bronze, at the ongoing African Championships in the women’s 4 X 100 meters relay. Despite not having the top three female sprinters from Ghana at this championships due to injury etc, the quartet made of three home-based athletes (Isha Pinnamang, Vida Bruce and Georgina Sowah) and German based (Gifty Addy) managed to claim 3rd position in a race where three teams were disqualified for different infractions. Morale and support for each other amongst the athletes here has been quite high and positive despite the frustrations with travel tickets which arrived too late for a few of the athletes to compete in their respective events. Indeed, Aziz Zakari, Eric Nkansah and Harry Adu Mfum all missed the men’s 100m due to the late acquisition of financial approval for ticket purchase from Ghana despite the fact that competition organizes moved the start of the 100m back in hope that Aziz and Nkansah would have arrived in time to compete. This was in anticipation that Aziz and Nkansah could easily be in the top six in the 100m thus earning a place on Africa’s 4X100m relay. However, neither of the two got here in time to compete in the 100m due to the late arrival of tickets. Yet, Aziz Zakari Ghana’s number one sprinter arrived late last night to defend his 200m title from two years ago. In classic fashion, Aziz has breezed through the first two rounds and is scheduled to compete in the finals of the 200m on Saturday evening where he will meet Frankie Fredricks, the African record holder over the same distance. On the women’s side, home based athlete, Vida Bruce, advanced to the final of the women’s 200m final and is scheduled to compete on Saturday night just prior to the men’s 200m final. In addition, Ghana’s defending All-African Games and African Championships champion/record holder, Andrew Owusu, will be competing in the triple jump tomorrow to vie for a spot on Africa’s team to the 2002 World Cup in Athletics. Owusu is currently ranked number one amongst African triple jumpers.
Meanwhile a few of the athletes, who had to buy their own tickets to Tunis, are awaiting word from Ghana as to when the money for reimbursements will arrive from Accra. The part of the contingent that flew in from Ghana, could not secure money for ticket refunds before they left due to late financial approval for the event. However, Dr. Owusu-Ansah, acting Chief Executive of the National Sports Council, has promised that the money for reimbursement of tickets will arrive in Tunis prior to the end of the competition i.e. Saturday 10th August.