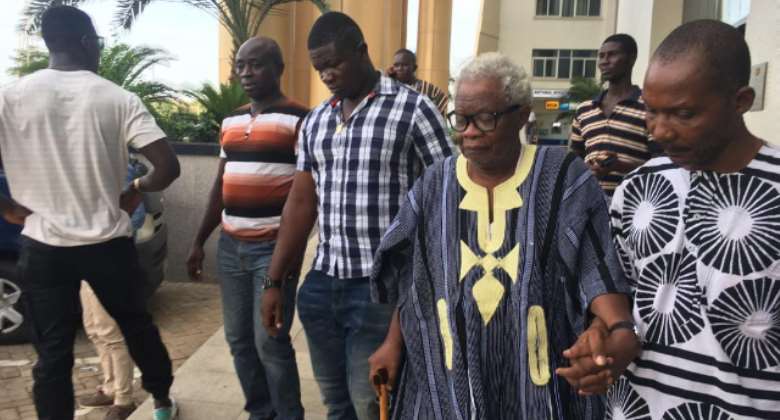 No one would have thought that, after almost three decades since Ghana began enjoying democratic and constitutional rule, social and economic deprivation in parts of the country could trigger attempts for secession by any group.

Though secessionist movements have been witnessed in Ghana pre-and post-independence, activities of such groups have been dormant until 2017 when a separatist group, in a rather shocking manner, emerged in the country.

Under the name the Homeland Study Group Foundation (HSGF), the secessionist group which has been traced to as far back as 1994, was pushing for part of the country including Volta and Oti regions to be made an autonomous state known as Western Togoland.

More revealing was when the group renewed its demands in 2017, with an Octogenarian, Charles Kormi Kudjordi, leading the fight.

Mr. Kudjordi, also known as Papavi, has always been in favour of a non-violent means to secede.

His quest to succeed was however not without controversy and drama. Following his unfortunate demise on Saturday, October 16, 2021, this article chronicles major highlights of his attempted secession.

The Homeland Study Group Foundation led by Papavi announced the imaginary Togoland's supposed separation from Ghana on their official social media handles on Saturday, November 16, 2019, after a group meeting was held in Ho.

While addressing a cheerful group of members of the separatist movement at the time, in the native Ewe language, Papavi recounted their struggles to restore the independence of the pre-independence Western Togoland territory, a German protectorate which was joined to the then Gold Coast to form the newly independent country, Ghana on March 6, 1957, under circumstances he believes were” illegal”.

Citing the recent omission of roads in the Volta Region from the critical roads list in the 2020 budget, Papavi said, “we've all witnessed what happened recently when we (Volta Region) were forgotten by the government in its budget. Can a parent forget about their children? We're not their children, so they have forgotten about us.”

There was a time in September 2020, when Ghanaians woke up to reports that the Western Togoland secessionist group had blocked some major roads leading into the Volta Region.

Most passengers travelling to areas in the Volta Region including Tefle, Tsopoli and Juapong were left stranded as a result of the development.

In that same month, there was a raid by Western Togoland secessionists on the Aveyime and Mepe police stations, leading to the release of cell inmates and the theft of 10 assault rifles.

A gunfight ensued and three of the secessionists were wounded and later transported to the Sogakope government hospital.

One other was reportedly killed during the encounter.

The supposed flag of the Western Togoland secessionist group was, in March 2020, seen flying at full mast at the premises of the Volta Regional Coordinating Council where the Volta Regional Minister operates as political head of the region.

Police officers from the Volta Regional Command were seen frantically pulling down the flag supposed to be the identity of the group.

It remains unclear who hoisted the flag and why it was done at the Regional Coordinating Council a day before the celebration of Ghana's 63rd independence anniversary.

Images made rounds on social media, showing some men and women dressed in black shirts with the inscription, 'Akpoyawo, we stand firm to defend.

It was not clear where the training took place, but the symbolic flag of the supposed Western Togoland State was seen among two other flags in the pictures.

The group advocating for independence was believed to have attacked the State Transport Corporation (STC) in the Volta Regional capital, Ho, and set ablaze one of its buses on September 29, 2021.

The incident according to sources occurred around midnight.

The members of the group reportedly fired gunshots before proceeding to beat up some drivers.

At the time, the Minister said the security agencies had prior intelligence about the group's planned attack on the Akosombo Dam and other sensitive installations and averted it.

Prior to his passing, the 86-year-old had been arrested and arraigned in connection with the supposed independence declaration.

Some of the group's members were arrested and slapped with treason felony charges in the past, but those charges were eventually dropped pending further investigations.

Interestingly, the Criminal Investigation Department (CID) of the Ghana Police Service apprehended one Dennis Seyram Benson who has been parading himself as the legal counsel of the separatist group.

Benson was arrested at the Kaneshie District Court 2 when he appeared to represent the separatists in their ongoing trial.

Information from the police indicated that he was arrested due to his suspicious demeanour at the law court.

The Police in its statement said it was compelled to probe the background, only to find out that he was fake.

Government not to blame

While all of these were happening in the building to the 2020 general elections, the government said it was utterly absurd for anyone to suggest the recent activities of the secessionist group were orchestrated by the government.

The activities of the Homeland Study Group Foundation led to widespread speculation that government intends to use that as a justification for heightening security in the Volta Region in the build-up to the general elections, in order to intimidate voters in the opposition National Democratic Congress' (NDC) traditional stronghold.