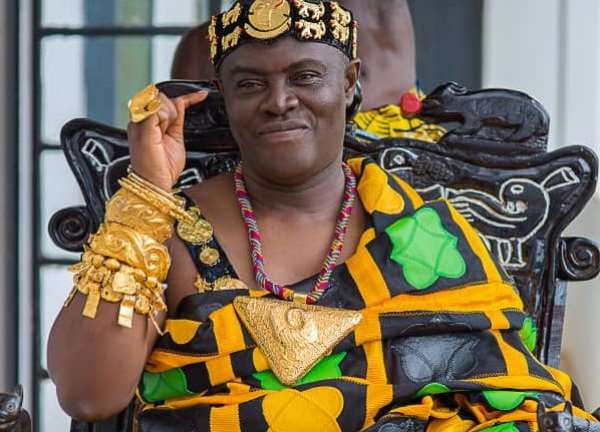 Nana needs our backing. We should as all true Bono youths rally behind him.

In our native Bono language, we say: _sɛ ɔdehyeɛ anko a, akoa dwane._

To wit: when vice prevails, and the nobility play possum, the seat of honour becomes a mere straw.

Nobility has spoken, and indeed, against the prevalence of vice.

Oseadeɛyɔ Dr. Nana Agyemang Badu II, the Paramount Chief of Dormaa Traditional area in the Bono region, has spoken as the Akan piesie (firstborn of the Akan tribe).

The traditional leader has thrown his weight behind some parliamentarians who have tabled a bill in the august house to seek punitive measures against the gay practitioners.

Who are these so-called prominent academicians and respected individuals who support LGBTQ+ activities in the country?

Is their education meant to add up to our misery or alleviate it?

Is it education to promote activities that stymie the clock of procreation?

Is it a higher education to think because we Africans must be spoonfed by those beguiling baits by the westerners in loans our anus should be the conduit to our purse?

Nana Agyemang Badu maybe per his social standing and private life as a High court judge might be a bit diplomatic with his radical approach to this filthy subculture to ours that's being pampered to assume a noble seat.

By nature we Bonos and by large Ghanaians are not barbaric, and hence may not take the laws into our own hands and bludgeon to death those caught in this abominable act. But knowing very well our representatives in the supposed august house carries our voice, and must be the custodians of our culture which undergirds our republican status, we'll square it out with them brutally if they're not led by common sense in their discussion and subsequent passage of the anti-gay bill in their pigeonholes.

If they the so called gay advocates are toxified by overindulgence in all fads that influx our culture and would spite the sacred dictates of our values and customs, they should be reminded that not long ago the palace gave a go-ahead to the ostracism of those who can't see in the beauty of our endowed maidens but will unashamedly share their beds with fellow bearded rigid men.

If per democracy we can't physically throw them out as outcasts, don't we hold unrestricted rights to make pariah in them and declare them persona nongrata in our traditional areas?

There are pressing needs that demand our arsenals to battle than glamorising sensuality which when allowed to fester will not leave an inheritance to our beautiful Bono and Akan culture.

Before the emergence of western style democracy we'd been pro-life and needed the numbers in everything we did - as a workforce, and to the battlefield.

Are we adequate in finding the cure to our many ailments lest we glorify palpable ominous catastrophe?

What's more democratic rights a man will have than the ability to choose the number of wives he can minister to their needs than being coerced to contract marriage only in the name of gratifying the flesh?

Isn't it risible to outlaw polygamy and give voice to pansexualism?

One more thing we have been saying to those calling themselves academicians promoting the LGBTQ+ is that: we Bonos give our daughters in marriage to noblemen. And our sons understand family to mean paternal side as well as maternal side.

This has sustained our tradition till date. And that we'll guard with all the strength in us embedded.

Any book of the different theorems to how we marry has never tested the test of science which should even be a no-brainer to today's advancement of technology. We therefore will not hazard any trajectory derailment into conflicting the word of our forebears.

No means no to Lesbians, gays bisexuals, transgenders and all its pluses.

Yes, we're a Bono united behind Dormaahene in this battle for our soul and sovereignty. We're numbered not only in our tens of thousands but in our millions, snaking about all the streets of Ghana to wage this war.

Signatories to this communiqué

4. Voice of the Lord ministry

More Opinion
ModernGhana Links
Poverty and the question of standard of living in Africa: The necessity of a positive mindset in alleviating poverty in sub-Sahara Africa
"YOUR CUP IS FULL" - A response to the comments of the Finance Minister – Richard Kweitey TETTEH
Ghana is not a political party and its citizens are not party members either
The police must release Shatta Wale immediately and apologise to him
Who benefits from the creation of the new block AUKUS?
Funny Face and Shatta Wale got it all wrong
Anglo Gold Ashanti: Provide answers to your opaque, shady deals
Problems facing people in the rural areas.
Hon. Ramadan a friend by action; A servant in deeds
TOP STORIES