Our presidents perform too many ceremonial duties 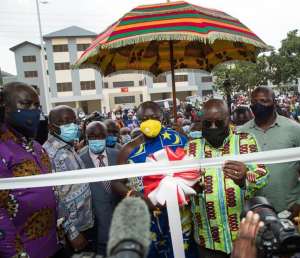 The 1992 Constitution of the Republic of Ghana does not mandate the President to perform ceremonial duties like sod and ribbon cuttings or even to go around the country inspecting ongoing government projects. The constitution does not debar him from doing such things either. When the president does any of these things, it is on his own volition.

The practice in our country has been that the presidents devote a lot of their time on these ceremonial duties. It started from the day we became independent, if not before. On independence, we had a cabinet form of governance with a Prime Minister as head of government and the Queen, represented by a Governor-General, as head of state. The Governor-General’s role was purely ceremonial. He did not decide government policy which was the duty of the Prime Minister and his cabinet. The last Governor of the Gold Coast, Sir Charles Noble Arden-Clarke, became Governor-General on independence. He held that post until 24 June, 1957. William Francis Hare, 5th Earl of Listowel, became the last Governor-General of Ghana holding the post until the 1st of July, 1960, when it was abolished with our country becoming a Republic.

The Republican Constitution of 1960 did away with the cabinet system and Kwame Nkrumah became the President. He combined both roles of head of government and head of state. Nkrumah performed a lot of ribbon cutting. It put him in the public eye and projected him as someone building up the country.

The Republic reverted to a cabinet system of governance in 1969 with a ceremonial president (the current president’s father) and a Prime Minister (K. A. Busia) who was in charge of governance. It lasted for 27 months. The Third Republic went back to a Presidential system and one man combined both the ceremonial and governmental duties of a head of state and government.

The current constitution is a strange mixture of an American style Presidential system and a cabinet system that requires half the members of cabinet to come from outside parliament. The head of state is also head of government.

The Fourth Republican Constitution gives enormous powers to the president. The least of these powers is for him to decide to go around the country cutting sods to mark the start of projects, inspecting ongoing projects, cutting ribbons to mark their completion, commissioning hospital beds, visiting chiefs, and attending funerals. But is this really the core duty of the presidency?

These ceremonies are huge drains on the nation’s resources. The president travels to these places in big convoys, disturbing traffic and interfering in the daily lives of the citizens of the area who are compelled to turn up to welcome the president in huge ceremonies. Sometimes, school children are made to line the roadsides in the scorching tropical sun to welcome the president who, almost always, does not arrive on time. Some of these kids are known to faint by the roadside through hunger and exhaustion.

Often the president goes to cut the sod to mark the start of a project and nothing happens after he leaves. He cuts ribbons of projects started by his predecessors and puts his name on huge plaques to give the impression that the project was constructed on his own initiative.

Somehow, the idea has been sown in the minds of Ghanaians that the more such ceremonies the president engages in, the more he is seen as building the country. But is this really so? The numbers of such ceremonies are not, in themselves, genuine indicators of the country’s march forward.

These ceremonies have become ruses to deceive the electorate. If it is the duty of government to provide a certain essential facility for the people, there is no need to make a ceremony of it. Many of these ribbon cuttings could be done by local officials before the press and with little fanfare. This will save a lot of tax payer money. But these ceremonies have become ego trips for the president who has an eye on the next elections.

The President should not make himself a project inspector since he does not have the expertise to judge with his own eyes if a project is actually proceeding well. He has experts who can determine such things and report to him. Often, ongoing projects are dressed up when it is known that the president will visit and the true state of the project is hidden from both president and the public.

The greatest, and most difficult, part of a President’s work load is to make crucial decisions. It is principally a desk job - reading reports, consulting with advisors and experts, chairing meetings, occasionally addressing parliament, and, most often, sitting down at home, all alone, to make important decisions on competing claims on the state. In this sense, the presidency can be a very lonely job. It is not something that is best performed before jubilant crowds of dancing citizens and singing school children.

Gallivanting around the country on poor roads can be detrimental to any man’s health, let alone the elderly people we usually elect to rule us. I look with worry at the 77-year old Akufo-Addo (whose actual state of health none of us knows) being driven on the rough roads of Oti and Volta Regions, meeting the “chiefs and people” and inaugurating market places, transformers, and toilets. Even if he travelled in a 50-vehicle convoy of the most comfortable V8s in the country, this journey must be physically tiring. It is not necessary for the development of the country.

Since these duties are not constitutionally mandated or prohibited, it will be up to us to, wilfully, establish a convention that drastically cuts down the president’s sod cutting activities. This precedence can start from any president. A future constitution should make specific what the president’s ceremonial duties should consist of.

Yes, the president should always be in touch with the people but our presidents devote a disproportionate amount of their time to ceremonial duties. The people are bound to see the effects of good governance in the improvements in their daily lives not through the number of projects the president personally commissions.