World Lung Day | Think twice, it is not another day in paradise: Air is deadlier than we thought it is! 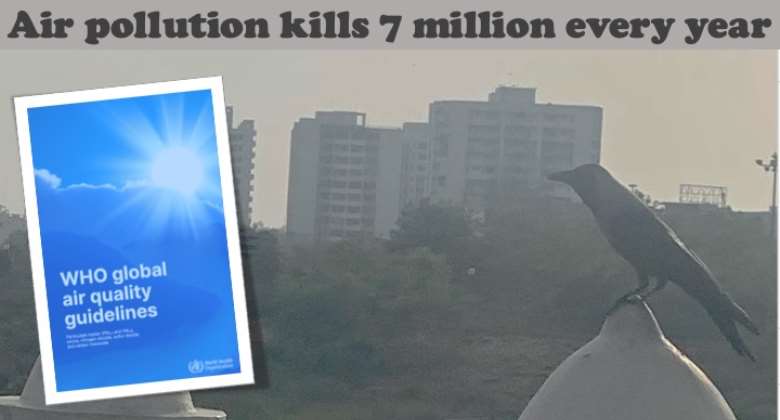 The WHO confirmed that every year, air pollution causes 7 million untimely deaths and result in the loss of millions more healthy years of life. In children, this could include reduced lung growth and function, respiratory infections and aggravated asthma. In adults, ischaemic heart disease and stroke are the most common causes of untimely death attributable to outdoor air pollution, and evidence is also emerging of other effects such as diabetes and neurodegenerative conditions. This puts the burden of disease attributable to air pollution on a par with other major global health risks such as unhealthy diet and tobacco smoking.

That is why the latest WHO 2021 Air Quality Guidelines recommend new air quality levels to protect the health of populations, by reducing maximum levels of the six lethal air pollutants, some of which also contribute to climate change.

According to the 2021 WHO Air Quality Guidelines, PM2.5 maximum levels are 5 (yearly average), which is half of what it was set as per the 2005 WHO guidelines.

Nitrogen Di-Oxide level maximum cap as per latest WHO guidelines is at 10 yearly average which is 10 times lower than what it was set in 2005.

Carbon Monoxide maximum levels are set at 4 (daily average), and maximum cap on Ozone levels as per the 2021 WHO Guidelines is 100 (8 hourly average).

According to the WHO, since its last 2005 update, there has been a marked increase of evidence that shows how air pollution affects different aspects of health. For that reason, and after a systematic review of the accumulated evidence, WHO has adjusted almost all the Air Quality Guideline levels downwards, warning that exceeding the new air quality guideline levels is associated with significant risks to health.

By striving to achieve these guideline levels, countries will be both protecting health as well as mitigating global climate change. When action is taken on these so-called classical pollutants – particulate matter (PM), ozone (O₃), nitrogen dioxide (NO₂) sulfur dioxide (SO₂) and carbon monoxide (CO), it also has an impact on other damaging pollutants.

Particulate Matter (PM) is primarily generated by fuel combustion in different sectors, including transport, energy, households, industry, and from agriculture. In 2013, outdoor air pollution and particulate matter were classified as carcinogenic by WHO’s International Agency for Research on Cancer (IARC).

Particulate Matter (PM), refers microscopic solids or liquid droplets that are so small that they can be inhaled and cause serious health problems. Both PM2.5 and PM10 are capable of penetrating deep into the lungs but PM2.5 can even enter the bloodstream, primarily resulting in cardiovascular and respiratory impacts, and also affecting other organs.

The more exposed to air pollution they are, the greater the health impact, particularly on individuals with chronic conditions (such as asthma, chronic obstructive pulmonary disease, and heart disease), as well as older people, children and pregnant women.

In 2019, more than 90% of the global population lived in areas where concentrations exceeded the 2005 WHO air quality guideline for long term exposure to PM2.5. More alarming is the reality that in 2019, India's Particulate Matter concentration was 70.3 microns 0 the highest in the world and 7 times the old 2005 WHO's guideline of 10.

Almost 80% of deaths related to PM2.5 could be avoided in the world if the current air pollution levels were reduced to those proposed in the updated guideline, according to a rapid scenario analysis performed by WHO.

While air quality has markedly improved in high-income countries over this period, it has generally deteriorated in most low- and middle-income countries, in step with large-scale urbanization, extractive industries, and so-called 'economic development' which is actually not only impoverishing majority of the people (and making tiny tycoons richer), but also poisoning our planet.

Last month in August 2021, Energy Policy Institute of the University of Chicago had reported its research findings: Air pollution is likely to reduce the life expectancy of over 40% Indians by more than 9 years, with Delhi and Uttar Pradesh states reported to be worst-affected ones in the country. Delhi residents will lose 9.7 years of their lives due to air pollution, while those in Uttar Pradesh will lose 9.5 years of life expectancy. Last month it was reported that annual average PM2.5 level in cities of Uttar Pradesh was more than 12 times than the old WHO guideline limit. Residents of the city I live in (Lucknow) are expected to lose 11.1 years of their life expectancy due to air pollution.

Business as usual is killing us!

The price of inaction by governments around the world is mountainous resulting in unnecessary human suffering, untimely deaths, and irreparable damage to our planet due to air pollution. Will governments dump the so-called 'development model' which not only plunders our air and natural resources but also is resulting in humanitarian crises for majority of our population? Will governments reject false solutions promoted by extractive and fossil fuel industries, hold these abusive corporations to account, and go for real people-centric solutions to save our health and our planet?