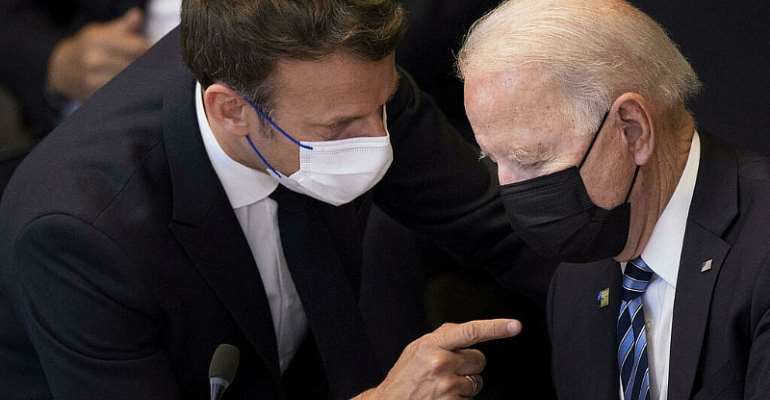 The UN General Assembly begins Tuesday against the backdrop of the submarine crisis that fired up an altercation between France, on one side, and Australia, the United States and Britain on the other. The surprise absence of French President Emmanuel Macron, a self-professed champion of multilateralism, has raised eyebrows – and questions over how far the feud stands to erode old friendships and further divide Nato.

Unlike last year's event, which was entirely virtual, this year delegations from all over the world are travelling to the UN headquarters in New York, while others will attend via video link.

One hundred heads of state and government are to speak at the assembly, which is being held under strict sanitary conditions.

France's presence will be minimal. Macron has chosen to send Foreign Minister Jean Yves Le Drian to speak on behalf of the country in a pre-recorded video message.

France in last place
Had Macron attended – even virtually, as was expected – France would have been among the countries at the starting blocks in delivering their positions on geopolitical affairs at the world's biggest diplomatic gathering.

Hot issues to be debated include the political upheaval in Afghanistan, climate change and the Iranian nuclear deal, with President Joe Biden giving his first major UN speech since entering the White House in January.

Because UN protocol dictates that lower-ranked diplomats be heard last in the schedule of speeches, Le Drian's video will be played on the last day of the assembly.

The last time a French president failed to represent France at the UN was 17 years ago, in 2005. At the time, then prime minister Dominique de Villepin was called upon to fill in for president Jacques Chirac, who was unwell and unable to travel.

'Shocking gesture'
While the Elysée Palace said Macron's absence was not related to the submarine fallout, France made its fury abundantly clear by recalling its ambassadors from both Washington and Canberra shortly after the alliance – known as Aukus – was announced.

"There is duplicity, contempt and lies,” Le Drian told France 2 television. “We cannot be a part of alliances like that.”

Summoning the ambassadors – something that's never happened in French-US-Australian history – was a “shocking gesture” that the Le Monde daily said was intended to “formalise the feeling of betrayal felt by Paris” at the loss of what was described as “the contract of the century”.

However Paris did not recall its ambassador from London, with an unnamed French diplomat telling Le Monde: “We didn't need to ... because there's nothing more to clarify with the British. We already know they were opportunists in this deal."

Indo-Pacific quandary
Speaking after a closed-door meeting on the sidelines of the UN assembly, the EU's most senior diplomat, Josep Borrell, warned that "more cooperation, more coordination, and less fragmentation" was needed to ensure the Indo-Pacific region, where China's influence is rising, remained peaceful.

For reference, the Indo-Pacific is the new name the United States, under former President Donald Trump, has given to the Asia-Pacific region.

Critics quoted in the French media have cautioned that Macron's absence will give the United States more airtime to promote its confrontational approach towards China.

“Macron would certainly have wanted to promote an alternative strategy,” reports RFI's New York correspondent Carrie Nooten – adding that the British and Australian prime ministers have been taking up ample media space at the UN since Monday.

Despite being in New York, Le Drian has no plans to meet with his counterpart, US Secretary of State Antony Blinken. However the Australian and British prime ministers, Scott Morrison and Boris Johnson, will both hold talks with Biden.

"We are right, but we are alone. Historians may see this as a key turning point."