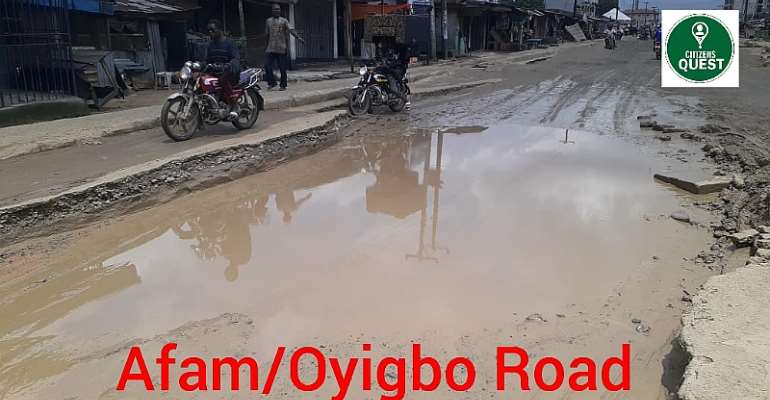 Citizens Quest for Truth Initiative, accountability advocacy Non-Governmental Organization has implored the Rivers State government, the Federal Government, multinational companies, their subsidiaries and all concerned to swiftly and immediately act on the deplorable state of Oyigbo-Afam Road, describing it as total neglect.

The advocacy group who quoted Abraham Lincoln thus, "To sin by silence when they should protest makes cowards of mankind” explained that the quote above reminds of the present situation in Oyigbo Local Government area in Rivers State, Nigeria.

According to the group, after the rumoured deplorable state of the access roads that crisscrosses the entire Oyigbo LGA, the Citizens Quest for Truth Initiative (CQTI) thought it wise to embark on a see-for-yourself (C4urself) quest to ascertain, first hand, what the true situation is about the roads.

“True to it, Citizens Quest was leg-stocked as what greeted them in this very crucial quest was the indescribable state of the roads. The situation can simply be described as BAD,” the group bemoans.

Text of the report reads: “The Oyigbo-Afam Road led the quest to the popular Kom-Kom road to the railway, at Obeama-Mirinwanyi community. It begins from Umusoya junction and it is a major access for all the multinationals (aforementioned) and other businesses operating in the LGA is not passable.

“Residents decried the long neglect by government and wonder why even the companies in the area cannot effect their corporate social responsibilities (CSR) to the people.

“In a chat with some residents and motorist/commuters, they lamented that the Government of the day in Rivers State have abandoned Oyigbo to their fate and only those with fleet of SUVs packed with well armed/riot looking Police officers can ply the road whenever they want to have any function in the area.

“Some motorist lamented their almost daily visits to their auto-mechanics due to the damages the failed road cause their vehicles.

“Some tricycle (popularly known as Keke) operators expressed pains in what they describe as dead traps because of their daily collapse with their passengers into the ditches on the roads.

“Commuters say they pay as much as N500 per passsenger on a tricycle (Keke) from the Umusoya junction to Railway/market which is not up to 1 kilometer.

“Small scale business owners told the Quest that the neglect has crippled businesses in the area and that has made life unbearable for the people.”

It would be recalled that the Federal Government has given approval for the complete reconstruction of Afam Road in Oyigbo Local Government Area of Rivers State to Transcorp Group to construct the 13.5km Oyigbo-Izuoma-Mirinwayi-Oklama-Afam Road.