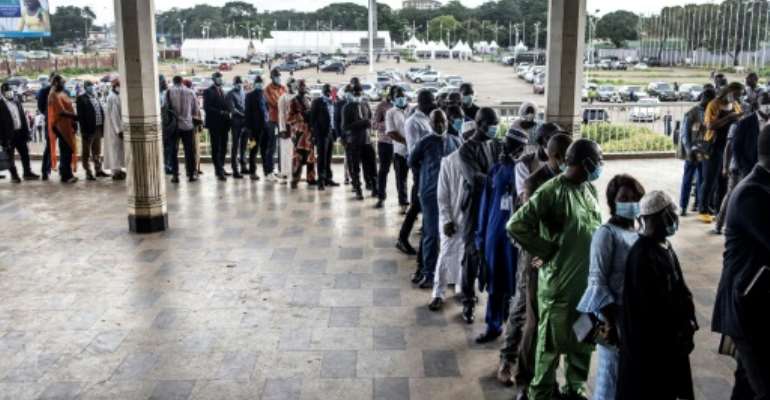 Members of Guinea's civil society wait in line at the Peoples Palace ahead of talks with Colonel Mamady Doumbouya. By JOHN WESSELS (AFP)

Hundreds of Guinean rights activists queued up for an audience with the military junta on Wednesday, AFP journalists saw, after the army seized power in a coup this month.

Civil-society leaders were meeting junta members as part of a four-day series of talks intended to pave a return to civilian rule in the West African state.

They quickly dissolved the government and installed a military junta, citing rights abuses under the 83-year-old president.

On Wednesday, activists defending human rights, women's interests and the fight against corruption, came in numbers to the parliament building in the capital Conakry to meet the junta.

Several participants told AFP that only certain activists were invited to speak, with coup leader Doumbouya also taking the floor to explain the reasoning behind the coup.

Womens' rights activist and former minister Mariama Satina Diallo Sy, who addressed the meeting, said that the promotion of human rights had been "touched upon".

She added that she thought coup leader Doumbouya wanted to listen before devising plans for Guinea's future.

However, Guinean League for Human Rights President Emmanuel Bamba said that Doumbouya did not specifically mention human rights during the meeting.

"We were left wanting," Bamba said.

Doumbouya consulted political leaders when he began the series of talks on Tuesday.

He told them that the putsch was a consequence of the failure of Guinea's elites -- but added that he wanted the transition process to be inclusive.

The country's new strongman also refused to commit to a timetable on returning to civilian rule.

"The only timetable that counts is that of the Guinean people who have suffered so much," he said.

The talks will continue through to Friday, with the junta expected to meet foreign diplomats, trade unionists and mining executives.

A poor nation of about 13 million people, Guinea is one of the world's biggest producers of bauxite, the ore used to make aluminium.