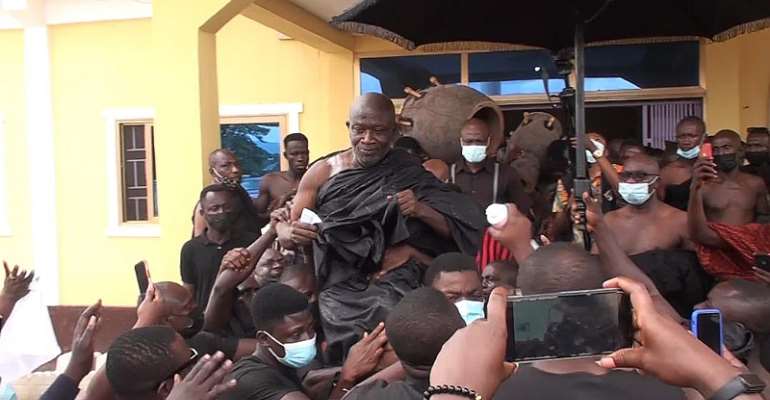 Nana Amoako Tuffour l, 67 years old, successor to Nana Boakye Ansah, who was destooled in 1994 held the "Mponponsuo", the state sword in his right hand, espoused the greatness, achievements and conquests of his ancestors and pledge to blaze their trail. "If I fail to continue the exploits of my ancestors and fail in my duty, I contravene the Great Oath of Oguahyia Kwesiada", he declared.

The enthusiastic crowd that gathered there immediately mobbed Nana Amoako Tuffour. Bare-chested-youth carried him on their shoulders, while women besmeared him with powder amidst singing of praises, drumming, and dancing the ecstatic crowd broke the security cordon to cast a glimpse at the new Abadwumhene. The sub-chiefs of Abadwum swore the oath of allegiance to Oguahyia Oduro Panini Birikorang in turns.

Oguahyia Oduro Panin Birikorang Edubiasehene, bemoaned the lack of development in Abadwum and laid the blames at the doorstep of the former Occupant of the stool,Nana Boakye Ansah,who was destooled in 1994 for gross misconduct and insubordination but went into a legal battle with the traditional authorities which lasted until two months ago. Oguahyia was however optimistic that a saviour In Prof.Joe Amoako Tuffour, traditionally known as Nana Amoako Tuffour I will bring developments to the town and its people.

"I'm happy that after 27 years of legal battle with the former chief,we now have a new chief in Abadwum,Nana Amoako Tuffour I is an elderly man and with his education and home training, I believe that he'll heal Abadwum of its sickness" he said optimistically amidst cheers from the crowd.

Nana Akua Dwum ll, Edubiase hemaa urged him to exhibit a high sense of honesty, humidity and transparency and offer positive leadership qualities to win the confidence and respect of his people. Nana Tuffour was further charged by the Edubiase hemaa to use his influence in the Ghanaian political space to get his town roads tarred and also hold high the virtues he was handed.

Speaking for the first time as a chief amidst cheers,claps and noise from the overjoyed crowd,the latest addition to chiefs in Edubiase traditional area,Nana Amoako Tuffour I, who even before his installation as a chief has already built an ICT center in Abadwum promised to deliver developments, move the community from its current shambolic state and place it on a higher pedestal that will invite envy from its contemporaries. Nana stated that, education, especially technological is one that is of high importance to him and will make sure children in his community turn their minds into "a Gold Mine" which will in turn eradicate child labour.

He called on all members of the Oyoko family to throw weight behind him as they're originally from Abadwum.

Professor Joseph Amoako Tuffour, is a revered Ghanaian economist who had his earlier education in Akrofuom, Amponyaase and letter continued secondary education at the Navrongo and Tweneboah Kodua senior high schools,he furthered his education at the University of Ghana where he read Economics.

He later travelled to Canada with his uncle and continued his education where he had his master's degree, he taught at the University of Alberta in Canada before pursuing his PHD.

Whiles still a lecturer in Canada, he frequently visited many African countries including Ghana to help the various governments charter a good economic path with his expertise.

He served under the erstwhile Kuffour's government, under Late Professor Mills' government and that of John Mahama.

At 67 years old, he is currently a member of the economic management team of the republic of Ghana and doubles as the Secretary to the vice President,Dr Mahamudu Bawumia.

He also serves as a visiting lecturer at the Kwame Nkrumah University of Science and Technology (KNUST) where he gives ceremonial lectures on economics every year.

He's also the owner of Fontonfrom Estates, situated within the heart of Prampram in the capital of Ghana, Accra.

He's married with three children who are all well to do.

Nana Amoako Tuffour I succeeds his brother, Nana Boakye Ansah who engaged the traditional area in a legal battle for 27 years over the stool.