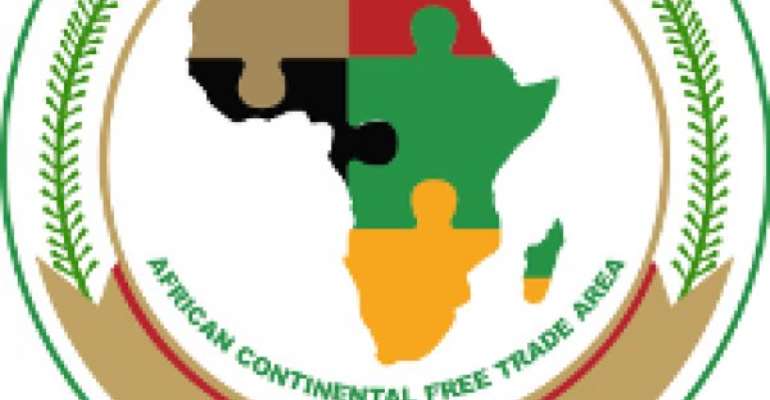 The African Continental Free Trade Area (AfCFTA) Secretariat has signed a Memorandum of Understanding (MoU) with the United Kingdom (UK) Government to formalise the shared commitment to the success of the agreement.

A statement issued by the UK High Commission in Accra, copied to the Ghana News Agency, said Mr James Duddridge, the UK Minister for Africa, joined Mr Wamkele Mene, Secretary-General of the AfCFTA Secretariat, to sign the MoU at the Secretariat's headquarters in Accra.

Mr Mene, said: “We are pleased to sign this MoU as it ushers us into a partnership for strengthening cooperation related to trade facilitation in Africa.

"The AfCFTA is a continent-wide integration project that is built on the intellectual labour of African thinkers, dreamers and negotiators across generations, who imagined and put in place the economic foundation on which a united, integrated and prosperous Africa will be built.

"We welcome all friends and allies that are willing to support an integration process that is led by Africa for Africans.”

Mr Duddridge said: “The UK is the first non-African nation to recognise the opportunities for trade and investment the landmark Africa Continental Free Trade Agreement offers, not just across the continent but globally.

“Today we formalise our commitment to this agreement as I joined Secretary General Wamkele Mene at the AfCFTA's Headquarters in Accra to sign a Memorandum of Understanding setting out our shared ambition.”

The statement said Africa's long-term success mattered to the UK and that it was in the interest of all to support a strong, prosperous and peaceful Africa – driven by its own citizens and acting as a dynamic force in the international arena.

It reiterated that during the signing, Mr Duddridge expressed the UK's commitment to partnering African nations and institutions to support the implementation of the AfCFTA.

The statement said AfCFTA was the African Union's most ambitious economic initiative and that the Economic Commission for Africa (UNECA) estimated that AfCFTA had the potential to boost intra-African trade by more than 50 percent.

It noted that the agreement had the potential to drive further growth across the continent through sustainable industrialisation, generating jobs and prosperity and reducing poverty.

It said the MoU, signed between the UK and the AfCFTA Secretariat, set out the framework for the partnership between AfCFTA Secretariat and the UK government and that it would promote and facilitate future trade and investment opportunities across the continent.

In addition, it would support the implementation of the AfCFTA agreement across African nations, and continue to strengthen trading links between the UK and countries across Africa.

Mr Ranil Jayawardena, UK Minister for International Trade, speaking from London, said: “Stronger trade and investment partnerships with Africa will be crucial to help us build back better from the pandemic- and establish cleaner, greener, more resilient economies.

“Trade is the route to prosperity for countries around the globe.

"The Africa Continental Free Trade Agreement is one of world's largest free trade areas and this deal shows our commitment to boosting bilateral trade and investment, leading to sustainable economic growth across the continent.”

The statement said during his visit, Mr Duddridge also met with Mr Mene to discuss the progress that the AfCFTA made since the last meeting in January 2021, and the Secretariat's ambitious future plans.