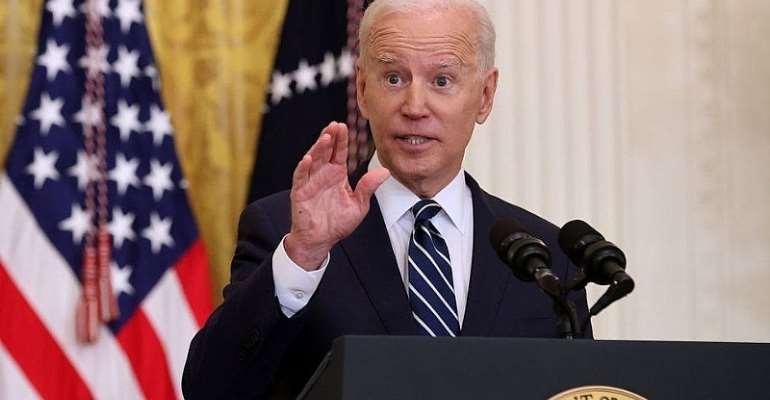 Biden must accept responsibility for the mess he inherited as Americans quiver looking at the process in action. While it is true that Americans had enough wars around the world, they do not like "the way" the pull out is being implemented under President Biden. The end of wars have never been pretty. Even the separation and reunification of Germany before and after the Wars were not implemented without the loss of lives on all sides.

It was not Biden that surrendered to the Taliban and labelled it a Peace deal, like the ongoing one with Kim Joung Un of North Korea without the South Korean President. How soon we forget that it was the same Tony Blaire that rightly helped invade Afghanistan but then invaded Iraq under false pretense. Yet, he called President Biden implementation of his predecessor’s Peace deal with the Taliban already set in motion, imbecilic.

Americans never any execution of the Peace Agreement under the previous Administration other than smiles and pictures with the Taliba Terrorist leader himself. This idea that you can negotiate Peace by photo opportunities with North Korea without South Korea or the Taliban without the sitting President is absurd on its face. But then diplomats explore new ways. Nixon visited and made deals with the Communists he criticized vehemently. About face.

Where was Tony Blair when Trump negotiated without getting Americans, their Afghan aids out? It was Stephen Miller that sabotaged the immigration process for the Afghans before Biden assumed power. They are the same ones blaming the present Administration for the mess they created. Most Americans are not surprised because Politics and elections are no longer based on facts. It is who can outdo the other and call white, black in broad daylight.

Yoruba say you cannot shave a man's head in his absence. Again, how do you renegotiate with the Taliban without the Afghan President, his Army or representatives? President Biden was somehow supposed to reverse a deal with the Taliban in Afghanistan, a deal that had rendered its sitting President persona non grata. A deal based on not attacking American soldiers but silent on Afghans aiding them.

President Biden did not help either by expressing his frustration publicly that the President of Afghanistan fled and his Army surrendered. They were negotiated out of Power. What is surprising is that the President and his Army did not resign after the deal with the Taliban was signed but waited, hoping against hope that a new American Administration would save them with more American soldiers than the 2,500 already on the ground to be reduced to zero!

Even more amazing is that the same Monday morning quarterbacks are blaming Biden for the Agreement they made with the Taliban. America has become so divided on emotional issues these days, it is difficult to know the difference between liberal and conservative ideologies. You cannot castrate a sitting President in Afghanistan, hand power and backing to his opponents and blame poor incoming President Biden for the mess you created.

Biden, throughout his career in politics has never been at the extreme. If anything, he was more of a conservative Democrat. Those old enough may remember any Tunde, Dick and Harry could get elected in America by shouting their opposition to busing. Willie Brown in California and a few others saw through the gimmick and became neutral on busing.

It is worse right now. You can get elected, at least, during the primaries by declaring that you are against Covid-19 vaccines and masks! Even when you know very well that the disease is deadly and can kill. You still take your chances in politics. Hypocrisy has always been part of politics anywhere but there are honest and dignified men and women willing to lose their political careers as some conservatives did, than dance naked in the marketplace.

American politics is not just any game. They are not ideal but they produced Caesar Chavez, Lyndon Johnson and Martin Luther King that suffered the hard consequences of their actions. It is too early to count President Biden out. He can still get away with what Obama could not because of the color of his skin. It may be sad to say but folks, that is reality in America. They can’t scare most Americans with Biden as they did with Obama. Blacks won him the Primary.

Ask most people in the world who they would rather trust as world leading Superpower and the answer is America. Mind you, not because it is the best country to live in but because it can be challenged within by people of Goodwill willing to lose their lives in Protests that would eventually change the minds of most Americans. But those hiding under the banner of conservatism would always fight back. Voting Rights and Freedom are not permanent.

The blame against Biden is the number of American troops needed on the ground to boost morale of Afghan soldiers from deserting and keep negotiating peaceful evacuation of Americans and Afghans that want to leave. The problem for the Biden Administration is that 4,500 to 2,500 American soldiers are needed after the previous Administration had negotiated total pull out to keep their pledge of not attacking Americans, which may have held for about a year. How do you renegotiate that?

Some Americans think the President can dictate or renegotiate the terms of the Agreement with the Taliban otherwise use the same force that has not worked for 20 years. Even if more force can be used, it would be at the risk of more collateral damages of the same people they are trying to save: Americans, Afghans working for them and women that have gained more in 20 years. It boils down to Americans who should have stayed longer to achieve "peace with honor" as promised in Vietnam. Three Presidents and the American people had enough!

As most critics claimed that it was the implementation and execution of the Agreement with the Taliban they found faulty, what execution or implementation was done before Biden assumed office other than a booby trap for his next Administration? When you see people who got the Taliban leader released from Pakistan and took pictures with a terrorist; blaming the Biden Administration, you see hypocrisy at its height.